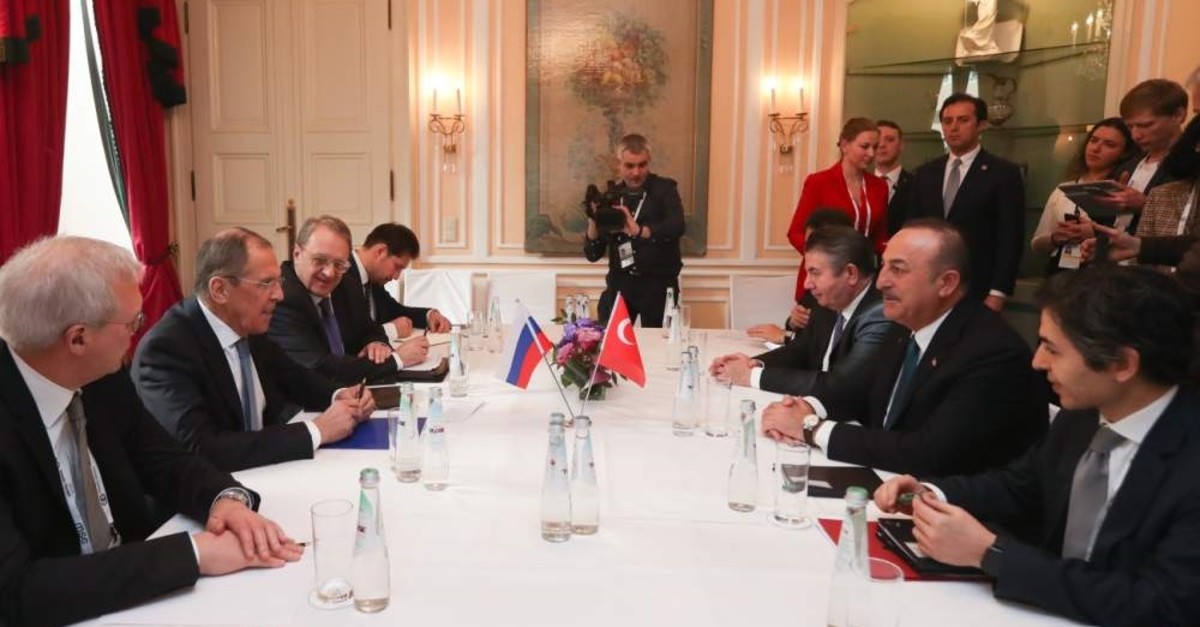 Turkish and Russian foreign ministers expressed determination to find a solution to ensure a cease-fire in Idlib, noting that the two sides are in constant contact with each other, as the Assad regime continues to carry out attacks targeting civilians in the northwestern province

Ankara and Moscow continue to cooperate to reach an agreement on a lasting cease-fire for the warring parties in the northwestern Syrian province of Idlib, and officials should not let the issue damage Turkish-Russian ties, Foreign Minister Mevlüt Çavuşoğlu said Monday.

"There is a lot of work to cover, as we continue to cooperate actively on these issues with Russia," Çavuşoğlu told Russian daily Izvestia in an interview published Monday.

"You will get to know the final response after the meeting of our delegations in Moscow Monday. We must not let the Syrian problem affect our cooperation and our relations," he said.

The meeting's outcome will determine the necessity of further talks on the problem.

Hundreds of thousands of civilians in Idlib province have been scrambling to escape a widening, multifront offensive by the Bashar Assad regime, leading Turkey and Russia to escalate diplomatic efforts to find a solution.

This meeting will be the third attempt of Turkey and Russia to resolve the Idlib crisis, following two previous visits by a Russian delegation to Ankara. The first meeting took place over the weekend of Feb. 8 in the capital province of Ankara, followed by a second meeting two days later.

Following the meeting, a statement came from the Turkish Foreign Ministry on Monday, saying that the discussion will continue today as well. The ministry also stated that the Turkish side highlighted the importance of preventing the humanitarian crisis in the region and possible measures to stop violations of the cease-fire.

Meanwhile, Russian Foreign Minister Sergey Lavrov said they hope that the Ankara-Moscow talks will de-escalate tensions in the region, as the two sides are in constant contact with each other regarding the developments on the ground.

"All the facts are on the table. Military representatives of both the Russian Federation and Turkey, who are on the ground in Syria, in the province of Idlib, examine the changes in the situation in constant contact with each other," he said.

Noting that the two sides' militaries have a full mutual understanding, Lavrov said, "I hope they have ideas that will allow us to de-escalate this situation, based on the agreements that were reached between the presidents of Russia and Turkey."

Lavrov also said that the attacks on Russian bases and Syrian positions have continued and "it is not possible to leave this unanswered."

The Assad regime forces said in a statement they would push on with their offensive, noting that they had taken full control of dozens of towns in Aleppo's northwestern countryside.

Pro-regime Al-Watan newspaper said the M5 highway, a vital artery in northern Syria, would be ready for civilian use by the end of the week. Aleppo city, once Syria's economic hub, was the scene of some of the most vicious fighting of the war between 2012 and 2016.

The regime forces had also opened the international roadway from northern Aleppo to the towns of Zahraa and Nubl toward the Turkish border, a military news service run by Lebanon's Assad-allied pro-Damascus Hezbollah group said.

The insurgent forces arrayed against Assad include Western-backed opposition fighters.

Backed by heavy Russian airstrikes, the government forces have been fighting since the start of the year to recapture the Aleppo countryside and parts of neighboring Idlib province where anti-Assad insurgents hold their last strongholds.

It has also upset the fragile cooperation between Ankara and Moscow, which back opposing factions in the conflict.

But more than 1,800 civilians have been killed in attacks by Assad regime and Russian forces since then, flouting both the 2018 cease-fire and a new one that started on Jan. 12.

President Recep Tayyip Erdoğan recently warned the Assad regime forces to retreat from the area near Turkish observation posts by the end of February. On Saturday, he appeared to move that date forward, saying Turkey would "handle it" before the end of the month if there was no pull-back.

He noted that Ankara's main concern is that the regime's offensive in Idlib is pushing nearly 1 million people toward the Turkish border when the country is already hosting over 3.5 million refugees.