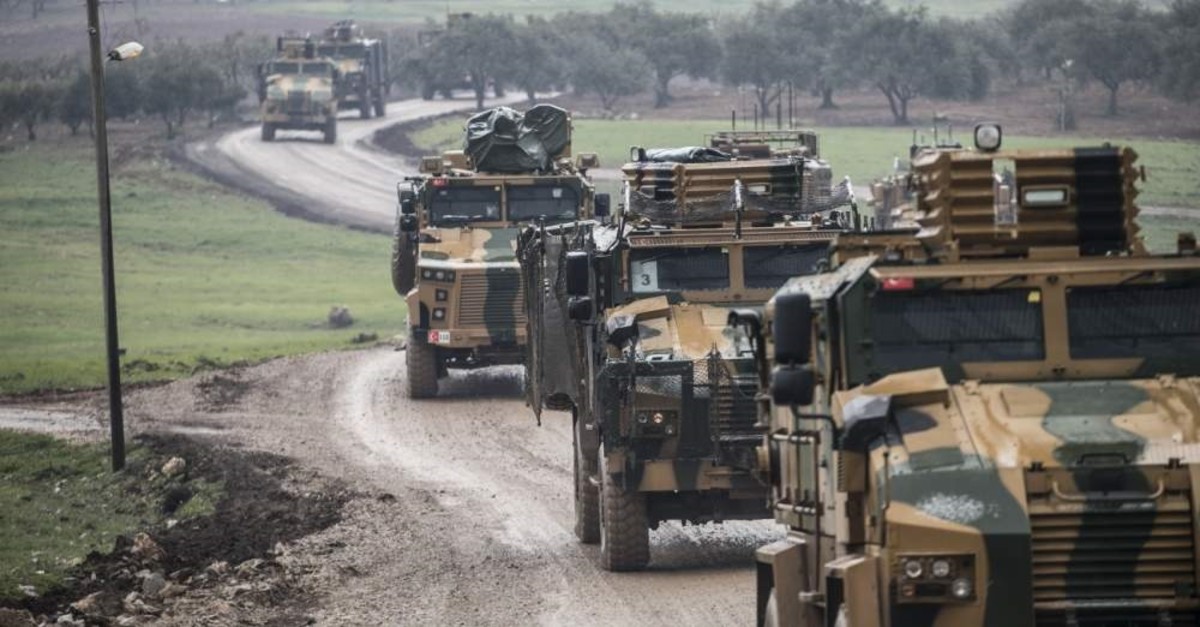 The Turkish Armed Forces have been reinforcing bases and observation points in Syria's northwest, following the rise in tension and a humanitarian disaster in the region

The Turkish Armed Forces (TSK) have been reinforcing military bases in northwestern Syria, while the guns point at forces loyal to the Bashar Assad regime, which has been committing greater atrocities every day in recent weeks and not refraining from attacking Turkish soldiers in the region. The TSK has virtually built a barricade of steel in an area of 60 kilometers in order to stop the advancement of the Assad regime.

The Syrian regime has seized 30 villages and towns around Aleppo, which it had been bombing for days, leading to tens of thousands of civilians fleeing to safe zones and leaving their homes due to aerial and ground attacks of the Russia and Iran-backed Assad regime.

Since the areas being attacked neighbor the Operation Olive Branch region, many civilians went to Afrin, and long queues of vehicles have formed on the Afrin-Idlib road once again. The TSK has sent a large part of its reinforcements to this region in the last week due to the Syrian regime's operations launched in western Aleppo. Thousands of blue berets commandos and armored vehicles were deployed 20-30 kilometers away from the Cilvegözü border gate in southern Hatay’s Reyhanlı district. Turkey has frequently voiced that it will not refrain from retaliating against Assad forces in the case of any further attack on its military and posts.

The Turkish military has set up dozens of military bases in western Aleppo and in several villages in Idlib’s east, particularly in the Darat İzza district. A high number of howitzers, multiple rocket launchers and tanks were deployed, while the barrels of the howitzers in the region were pointed at the Syrian regime forces. Reinforcement of the recently established base in Sarmada district just 6 kilometers from the Turkish border has continued throughout the night, raising the number of armored vehicles sent by the TSK to the region to 3,000.

The Syrian regime said on Monday it had taken full control of dozens of the towns in Aleppo's northwestern countryside, and it would press on with its campaign to wipe out militant groups "wherever they are found."

Meanwhile, the Turkish military has dispatched more soldiers and stationed multiple rocket launchers on the Syrian border as it continues to reinforce units and equipment at Turkey's observation posts in Idlib on Monday with a military convoy of 150 vehicles. Turkey has been reinforcing its observation posts in Idlib following two attacks by the Assad regime forces, which left 13 Turkish soldiers and a civilian dead, and 45 others injured.

Turkey remains the country with the most refugees in the world, hosting more than 3.7 million migrants since the Syrian civil war broke out in 2011.

The Syrian regime and Russia have indiscriminately attacked medical staff and facilities throughout the civil war, making the lives of locals even harder with limited access to medical aid, food, water, sanitation and heating.

Turkey has been intensifying its humanitarian efforts through various government institutions and nongovernmental organizations to aid recently displaced refugees. These institutions have also started to build permanent housing in the safer regions near the Turkish border as the displaced wait for a helping hand in the face of the dire humanitarian situation.

Turkey's Diyanet Foundation’s (TDV) Syria Coordinator Mahmut Temelli stated: “We deliver daily food aid to recently migrated families. We set up tents to solve their housing problems. We distribute the aid coming from all throughout Turkey to those in need. We deliver urgent necessities such as food, beds, blankets and winter clothing to innocent civilians here. We settled 1,000 families in the tent camps we set up in the last month, and we will settle another 1,000 in briquette housings in the following days.”

The aid agencies involved include the Deniz Feneri Association, which has sent aid trucks full of food, blankets and winter clothing, as well as Sadakataşı, a group that has launched a permanent briquette housing project in Idlib that aims to shelter 1,000 people in its first stage. The group has already established a temporary camp with 300 tents, and the Turkish Red Crescent has also been setting up tents in the region.