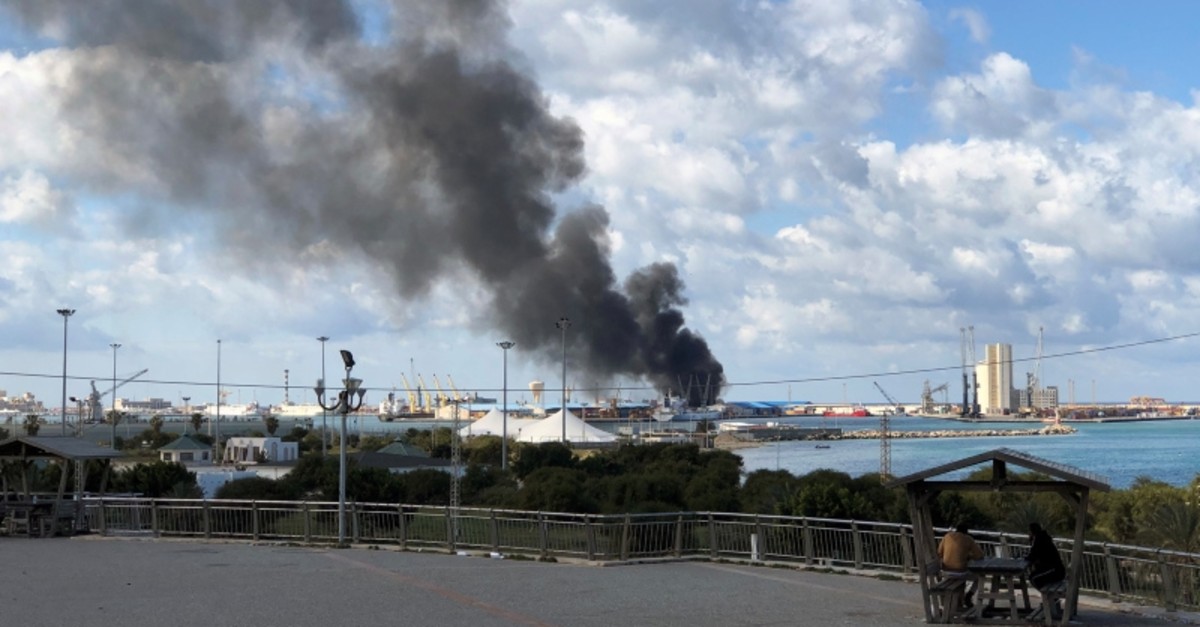 Smoke rises from the port of Libyan capital Tripoli after being attacked by eastern Libya based forces of Khalifa Haftar, on Feb 18, 2020. (Reuters Photo)
by Compiled from Wire Services Feb 18, 2020 2:32 pm

The seaport in Libya's capital Tripoli was attacked by eastern-based forces loyal to putschist Gen. Khalifa Haftar on Tuesday.

However, the attack occurred after flights to Libya's only civil airport came to a halt amid attacks by Haftar forces late Monday, as they have been trying to capture the capital Tripoli for months. In a statement, the management of the Mitiga International Airport in the Libyan capital Tripoli said the airport was targeted during the takeoff of a Libyan Airlines plane.

Libya's U.N.-recognized legitimate Government of National Accord (GNA) claimed that Haftar militants were responsible for the attack. The Mitiga airport has been targeted various times by the Haftar militants.

A military source said the attack aimed to sabotage celebrations to mark the ninth anniversary of Libyans' Feb. 17 revolution, which ousted former ruler Moammar Gadhafi. Thousands of people attended the celebrations at the Martyrs' Square in Tripoli on Monday.

Meanwhile, Fayez al-Sarraj, the head of the GNA, released a video message on the anniversary of ousting Gadhafi. Sarraj said that they are the advocates of peace and they are trying to ensure "stability" in Libya as well as making every effort to achieve a compromise.

Since early April, forces loyal to Haftar have been launching a campaign to capture Tripoli from the GNA forces. Clashes between the two sides since then have left more than 1,000 people dead and about 5,500 wounded, according to the World Health Organization (WHO).

Libya has remained beset by turmoil since 2011 when Gadhafi was ousted and killed in a bloody NATO-backed uprising after four decades in power. The oil-rich country has since seen the emergence of two rival seats of power: one in eastern Libya, with which Haftar is affiliated, and the Tripoli-based GNA, which enjoys U.N. recognition.

Meanwhile, the U.N. launched a $115 million appeal on Monday to assist tens of thousands of Libyan civilians, warning that foreign governments were not honoring pledges to stay out of the country's brutal civil war.

Speaking with reporters in New York, Yacoub El Hillo, the U.N.'s resident and humanitarian coordinator for Libya, called for a cash injection to get food, medicine and other forms of support to the most vulnerable of the 900,000 Libyans in need.

"We are witnessing a protracted conflict severely impacting civilians in all parts of the country on a scale that Libya has never seen before," El Hillo told journalists via a video connection from Libya's capital, Tripoli.

"Tens of thousands of Libyans, in addition to an increasing number of vulnerable migrants and refugees, continue to endure appalling hardship and suffering," he added.

According to El Hillo, foreign governments have not come good on pledges made in Berlin last month to halt arms supplies to armed Libyan groups fueling the raging conflict.

"The increasing use of explosive weapons has resulted in unnecessary loss of life, displacement, destruction and damage to vital civilian infrastructures, such as hospitals and schools," said El Hillo.