No one is safe under brutal rule of Syria's Assad, not even the dead 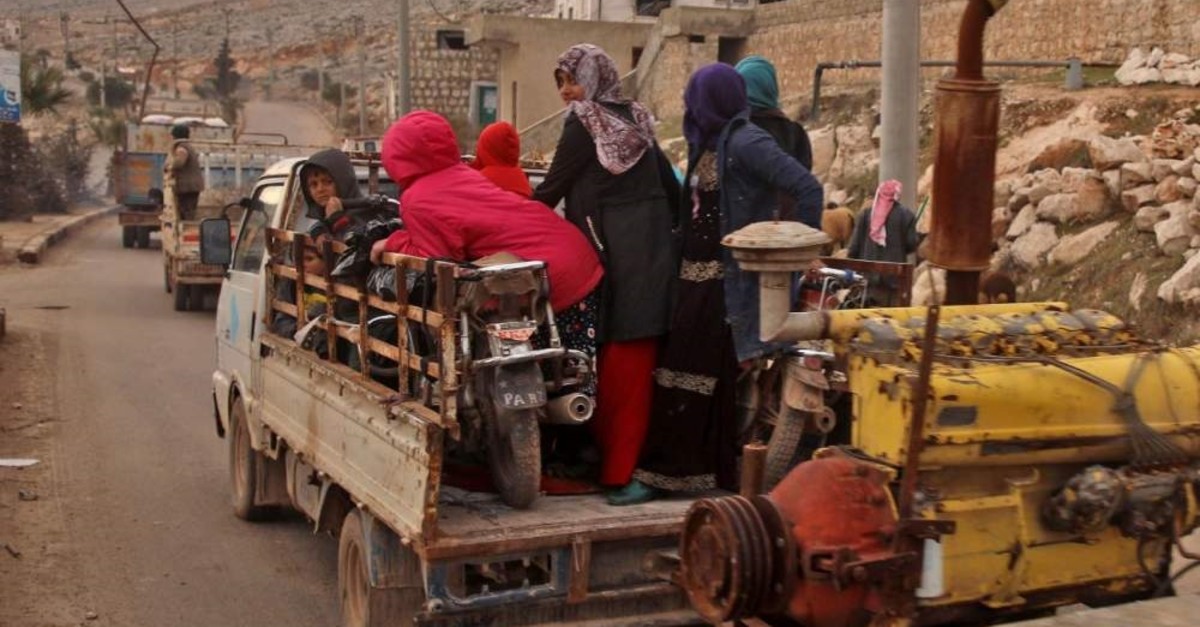 Vehicles carrying internally-displaced persons (IDPs) and their belongings drive through the town of Darret Ezza, about 30 kilometres northwest of the northern Syrian city of Aleppo, Feb. 17, 2020. (AFP Photo)
by Uğur Yıldırım Feb 18, 2020 7:03 pm

Bashar Assad continues his rule of terror with escalating violence each day, as regime forces' brutality spreads from civilians to graves

Syria has been hurtling toward a breaking point for the past two decades under the rule of a man named Bashar Assad, whose brutal actions during the nine-year civil war have finally created the worst humanitarian catastrophe of the 21st century, on par with the World War II. Despite having killed hundreds of thousands of people and displacing millions more, it seems like Assad and his regime can't get enough of the brutalities.

The latest movements of Assad troops in northwestern Idlib, which is the last stronghold of the opposition groups, have been the peak of the regime's merciless actions, with civilians having been targeted constantly since April, including those who have fled to refugee camps. On Friday and Saturday, one man was killed and six other civilians were wounded in such attacks, according to the U.N. Apart from the camps; hospitals, schools, mosques and bazaars are constant targets of the regime forces, disrupting the daily lives of the civilians, damaging the infrastructure and raising the risk of plagues in the region.

Yet, probably one of the most surprising manifestations of the regime's rage has occurred in graveyards, which have been continually vandalized by the regime forces, especially in towns from which civilians have already fled. In Idlib and Aleppo, regime soldiers are not only damaging the tombs but are also digging up the graves and emptying them. They also share the footage of their vandalism on social media.

According to the U.N. Human Rights Chief Michelle Bachelet, the humanitarian crisis in northwestern Syria has reached a horrifying stage as fleeing civilians are attacked by regime forces.

Speaking on Tuesday, Bachelet called for the establishment of humanitarian corridors.

"No shelter is now safe," Bachelet said. "And as the government offensive continues and people are forced into smaller and smaller pockets, I fear even more people will be killed."

The U.N. estimates that more than 900,000 people have been uprooted in the region since the start of December, representing the largest displacement since the conflict started in 2011.

Since the start of the year, nearly 300 civilians have been killed in the violence, 93% of them at the hands of the regime army and its allies, according to the U.N. Human Rights Office in Geneva.

The United Nations Children's Fund (UNICEF), meanwhile, said that since the beginning of the year 77 children were confirmed to have been killed or injured due to the escalation of violence in northwestern Syria.

More than 500,000 children have been displaced by intense violence in the area since Dec. 1, with tens of thousands of families now living in tents and in the open air in freezing temperatures.

"Children and families are caught between the violence, the biting cold, the lack of food and the desperate living conditions. Such abject disregard for the safety and wellbeing of children and families is beyond the pale and must not go on," Fore added.

This is not the first time that the brutalities of the Syrian regime have come to the agenda. In 2015, a Daily Mail article titled "'People had deep cuts, some had their eyes gouged out, their teeth broken': New book reveals the grotesque torture and murder meted out by Syrian dictator Assad – the man Russia's Putin is helping to keep in power," demonstrated the devastating potential of the regime forces. The article was based on a book focused on the works of a regime photographer, codenamed Caesar, that were revealed as evidence of the regime's actions.

"I had never seen anything like it," Caesar is quoted by the Daily Mail as saying. "Before the uprising, the regime tortured prisoners to get information – now they were torturing to kill."

"The tortured, starved and burned bodies in the photographs are the political opponents of Assad's regime. Many of them, who were among the regime's first victims, are only demonstrators who dared to stand up against the dictator," the article added regarding the situation, giving a list of graphic content that shows the scale of the horror that was spreading across Syria.

Recalling Syria's past, the article also implied that Assad's brutality was just a continuation of the brutality of his father, Hafez Assad.

"Despite claims that he is fighting terrorism, Assad's oppressive 15-year rule over the country has in fact seen everything from barrel bombs to poison gas used to murder thousands of Syrian civilians, including women, children and pensioners," the article underlined.

Still, despite all the warnings of the international community and the escalating humanitarian catastrophe, Assad continues to brag about his brutalities, even suggesting Tuesday that a "final victory" was in sight. Claiming to fight against terrorists, the regime leader even dares to claim that what his troops are doing in Idlib is "liberation."