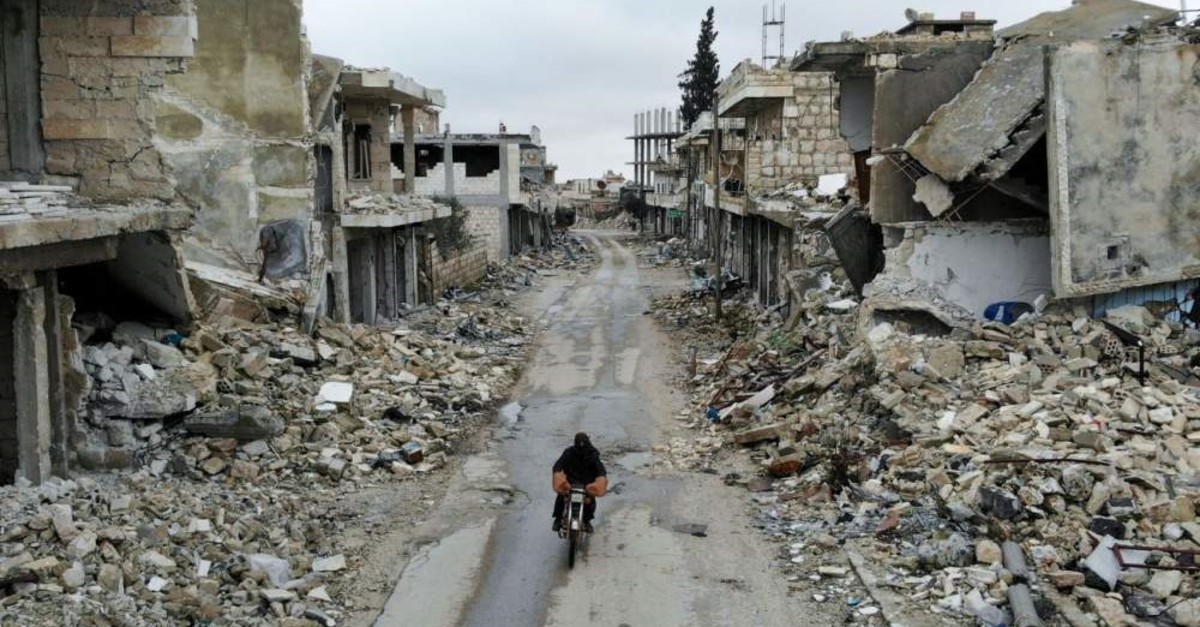 An aerial picture taken Feb. 15, 2020, shows a Syrian man on a motorbike in the deserted Syrian city of Kafranbel, south of Idlib city in the eponymous northwestern province, amid an ongoing pro-regime offensive. (AFP Photo)
by Dilara Aslan Feb 20, 2020 4:06 pm

As the situation in northwestern Syria spirals out of control due to violations of the Astana and Sochi agreements by Russia and the regime, the SNA calls for the right of self-defense and the end of the deals' limitations

The Astana process and the Sochi deal, envisaged to bring a cease-fire and political settlement to the nine-year-long conflict in Syria, have tied the hands of the Syrian National Army (SNA) while being ignored by Russia, Iran and the Bashar Assad regime, a high-ranking official of the SNA said.

“We have followed through on all the commitments, but the Russians and the Iranians have never abided. All armistice agreements failed due to the lack of commitment on the Russian side. We call on Ankara to announce the end of the Sochi agreement and to explore new options to help us protect our people,” Mustafa Sejari told Daily Sabah.

The Russian-backed regime has recently advanced in its campaign to seize the last opposition stronghold in the country’s northwest and has gained control over the strategic M5 highway for the first time since 2012. Yet, this advance has violated the borders of the Sochi deal and drawn strong reactions from Turkey, one of the guarantors of the deal, in addition to Russia and Iran, especially after regime attacks killed 13 Turkish soldiers two weeks ago. Calls from Turkey, the U.N., European Union and U.S. to withdraw back to the Sochi borders have been largely ignored by Russia and the regime.

Indicating that the situation in the field is bad and that attacks of the Assad regime, Russia and Iran-backed militias continue, Sejari said: “We lost many areas because of the firepower used by the Russians, targeting civilians, destroying infrastructure and targeting hospitals and schools. The shelling and killing continue against civilians and vulnerable people in and around Idlib.”

“Yes, we believe in a political solution,” Sejari continued but stated that the latest developments indicate the opposite side’s unwillingness in this matter. “We and our people are subjected to the attacks of Russia and the regime without being given the right to self-defense as a result of the Astana and Sochi understandings,” the military official said.

In September 2018, Turkey and Russia agreed to turn Idlib into a de-escalation zone in which acts of aggression are expressly prohibited. But more than 1,800 civilians have since been killed in attacks by the Assad regime and Russian forces, flouting both the 2018 cease-fire and a new one that started on Jan. 12. Furthermore, Turkish and Russian delegations met two days in a row this week in the face of the surge in violence in northwestern Syria, yet, according to Turkish officials, no satisfactory conclusion was reached during the diplomatic efforts. Most recently, President Recep Tayyip Erdoğan warned the regime that an operation in Idlib in the case of continued attacks was a “matter of time.”

“Our people are subjected to a war of genocide, and our capabilities are very weak,” Sejari added.

He said the national army is currently being subject to systematic propaganda and campaigns of distortion through various channels, such as agencies, media newspapers, terrorist groups and social media.

‘Russia party to the conflict, not guarantor’

“Russia is a supporter of the aggression and a party to the conflict, not a ‘guarantor,'" Sejari said, referring to the fact that Russia is still backing Assad in the face of the violations to the agreements of which it is a guarantor.

“Russia is directly leading the military assaults and supervises all operations while the regime cannot launch any military operation without a green light from the Russians,” he said.

The recent increase in aggression by Russia and the regime has caused tension between Turkey and Russia. However, both Russia and Assad do not seem to be stepping down in their statements regarding the latest offensive on Idlib.

Russia on Wednesday objected to the U.N. Security Council adopting a statement that would have called for a cease-fire in northwest Syria, diplomats said, after a tense, closed-door meeting.

"We tried very hard to have a press statement calling for the cessation of hostilities and humanitarian access to Idlib," Nicolas de Riviere, French ambassador to the United Nations, told reporters. "Basically Russia said no, which is very painful."

Assad, on the other hand, vowed to continue the onslaught on Idlib and the neighboring Aleppo countryside.

"I cannot report any progress in ending the current violence in the northwest or in reconvening the political process," U.N. Envoy to Syria Geir Pedersen told the council in New York.

"Russian and Turkish delegations have met intensively in recent days ... but no understanding has yet emerged," he said.