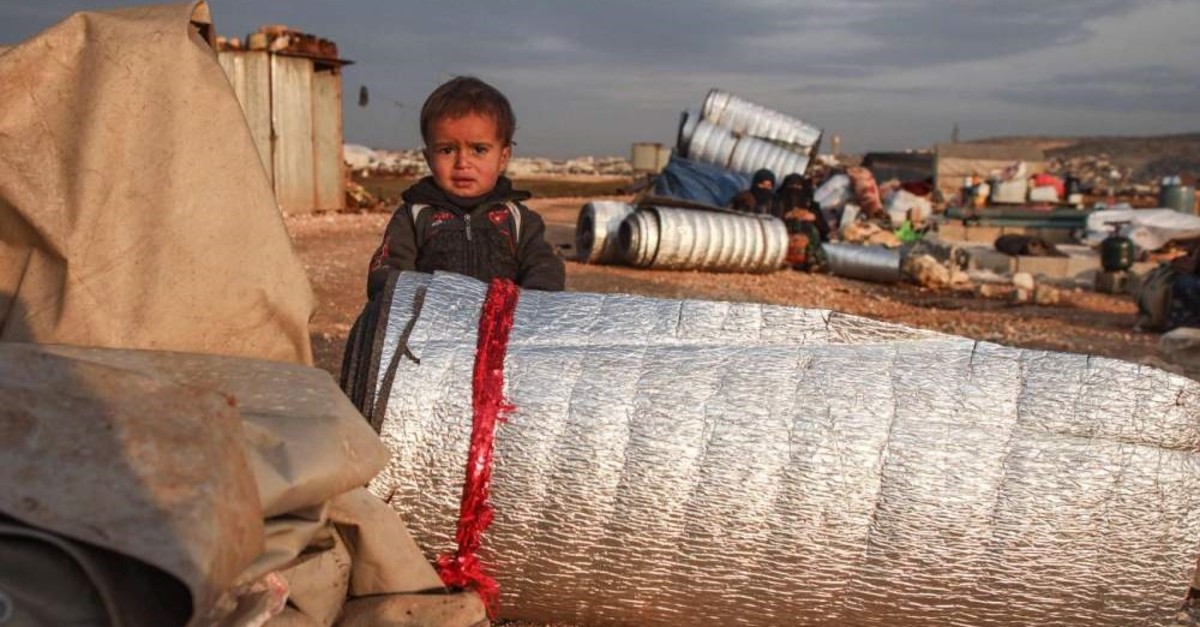 A child stands behind rolled-up thermal insulation foil out in the open at a camp for displaced Syrians east of Sarmada in the north of the northwestern Idlib province as people prepare to flee the camp, Feb.16, 2020. (AFP)
by Daily Sabah with Agencies Feb 20, 2020 6:46 pm

Recently, the nine-year-long Syrian civil war reached a new turning point with the escalation of the attacks, not only by the regime forces but also its backer Russia, on the last opposition stronghold in northwestern Idlib province.

The attacks caused a massive refugee flow, with hundreds of thousands of people escaping the region each day, which is hardly a new phenomenon in a war that has created the largest refugee flow the world has ever seen. However, the offensive against Idlib brought a new twist to the crisis by proving that even displaced civilians in refugee camps are not free from the horrors of the regime and Russia.

The first attack on a refugee camp took place in November, when at least 26 civilians were killed in a regime attack on the outskirts of Idlib at a shelter where 7,000 people had resettled. Despite strong condemnation from the international community, especially Turkey, the attacks on the camps did not stop at that point. In fact, last week was marked by regime attacks on the camps – especially in the Sarmada town, which according to the Syrian Network for Human Rights, came under attack for the first time in years. In the latest of such attacks, a woman was wounded Wednesday due to regime shelling in a refugee camp near the Turkish border.

On Friday, Omar Rahmoun – the head of the National Reconciliation Committee, which is backed by the Syrian regime – shared a tweet in which he warned the refugees in the camps to be careful as the attacks will continue. Rahmoun even went as far as to call on the displaced people to flee once again from the regime and find yet another shelter.

The attacks on the camps alarmed not only the refugees but also the international community, as the U.N. warned Tuesday that nowhere in Idlib is safe for displaced Syrians.

"No shelter is now safe. And as the government offensive continues and people are forced into smaller and smaller pockets, I fear even more people will be killed," U.N. Human Rights Chief Michelle Bachelet said, denouncing the attacks on the camps.

Nearly 300 civilians have been killed in attacks this year in northwest Syria, with 93% of the deaths caused by Syrian regime and Russian forces, she added.

However, these warnings seem to have zero effect on both Russia and the regime, as demonstrated by their ongoing attacks and their statements. Russia's envoy to the U.N., Vasily Alekseevich Nebenzya, said Wednesday that Russia will not stop their support for the regime forces, claiming that they are fighting against "terrorism" within the country, ignoring all the civilian killings.

According to the agreement, a cease-fire in the Idlib region would be preserved, with the withdrawal of heavy arms and radicals from the region. Before the agreement, the Assad regime was signaling a huge operation on Idlib, raising fears of a new humanitarian crisis for the international community.

Syrian families displaced by the attacks try to survive amid the harsh winter conditions in camps near the Turkish border.

The head of the World Health Organization said Tuesday that out of nearly 550 health facilities in northwest Syria, only about half were operational.

"We repeat: Health facilities and health workers are not a legitimate target," Tedros Adhanom Ghebreyesus told journalists in Geneva.

The Syrian NGO Alliance, on the other hand, said displaced people are "escaping in search of safety only to die from extreme weather conditions and lack of available resources."

"We have hundreds and thousands of people who are fleeing ... not just from bombardments but from lack of insulation, from the weather, a lack of heating. It feels like doomsday," Razan Saffour of the Syrian Expatriate Medical Association told Agence France-Presse (AFP) in Istanbul.