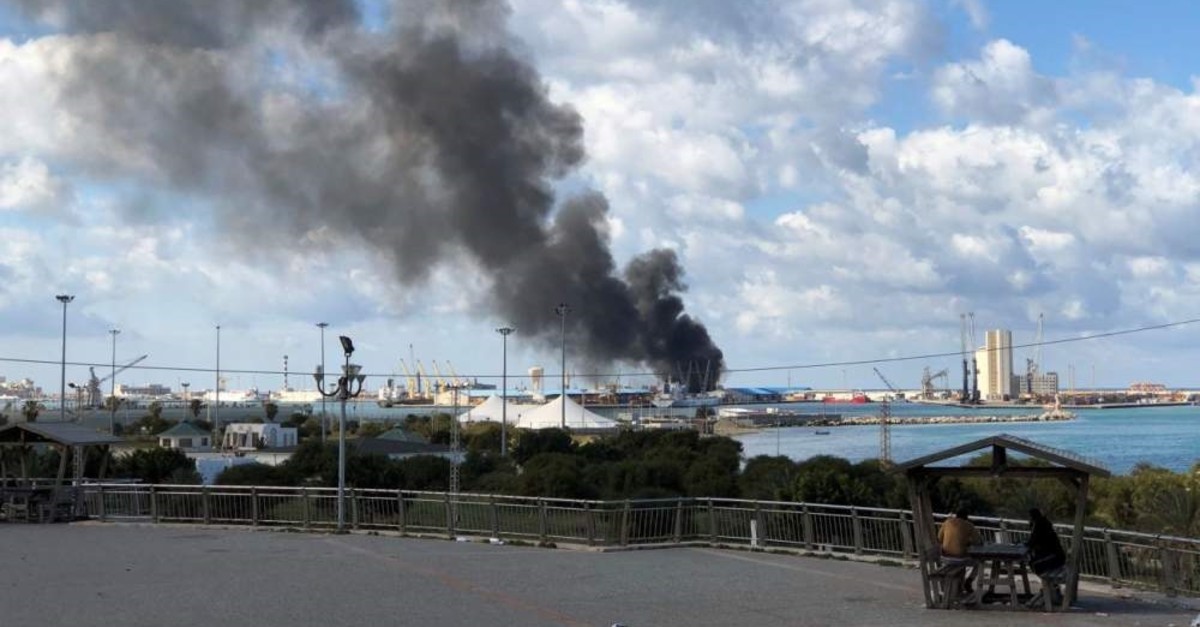 A cloud of smoke rises from the Tripoli port after being attacked by putschist Gen. Khalifa Haftar's forces in Tripoli, Libya, Feb. 18, 2020. REUTERS/Ahmed Elumami
by Daily Sabah with Agencies Feb 20, 2020 1:48 pm

The U.S. on Wednesday condemned an attack the eastern Libya-based putschist Gen. Khalifa Haftar's forces carried out on Tripoli Port. It also voiced concerns about the recent escalation in violence.

In a written statement, the U.S. Embassy in Libya said that Ambassador Richard Norland met with the head of Libya's National Oil Corporation, Mustafa Sanallah, following the attack on the port.

Expressing Washington's concerns about the recent attacks, Norland said, "This situation did not lead to anything but blocking civilians' access to vital fuel."

Also meeting with Haftar, Norland stressed that the block on the energy sector must be lifted and facilities belonging to the National Oil Corporation should not be targeted.

"These attacks prove that rival sides in Libya should immediately build a peaceful dialogue," he said.

Norland also called on all sides to adhere to diplomatic talks conducted by the U.N. in Geneva.

On Feb.19, Libya's U.N.-recognized Government of National Accord (GNA) said, forces loyal to Haftar killed three civilians and injured five others in two missile attacks on the Port of Tripoli.

It appeared to be the first such attack on Tripoli's port since Haftar's forces began their siege of the city almost a year ago.

Ghassan Salame, the head of the U.N. support mission in Libya, called the port attack a "big breach" of the cease-fire.

Since the ouster of late ruler Moammar Gadhafi in 2011, two seats of power have emerged in Libya: Haftar in eastern Libya supported mainly by Egypt and the United Arab Emirates (UAE), and the GNA in Tripoli, which enjoys U.N. and international recognition.

Following the attack, Libya's U.N.-recognized government late Tuesday announced that it withdrew from the U.N.-hosted military committee talks in Geneva until a determined stance is embraced against the violations of Haftar's forces.

The U.N. support mission in Libya called on "all parties, especially the Libyan National Army, to desist from escalation and provocation."

The current cease-fire was brokered by Russia and Turkey on Jan. 12. But both sides in Libya have repeatedly violated the truce, which was supposed to de-escalate the fight for control of the country's capital.

The National Oil Corporation, which dominates Libya's critical oil industry and is based in Tripoli, said projectiles struck meters away from a highly explosive liquefied petroleum gas tanker discharging in the port, prompting it to evacuate fuel vessels from the area and cancel offloading operations.

Haftar forces rely on military assistance from the UAE and Egypt, as well as France and Russia. On the other side, Turkey, Italy and Qatar back the U.N.-supported government that Prime Minister Fayez al-Sarraj leads in Tripoli.

The National Oil Corporation said losses from the oil closures have reached more than $1.7 billion as of Feb. 18.

The Geneva talks come amid intensified diplomacy among world powers seeking to end the conflict that has ravaged Libya for nine years and increasingly drawn in foreign powers.