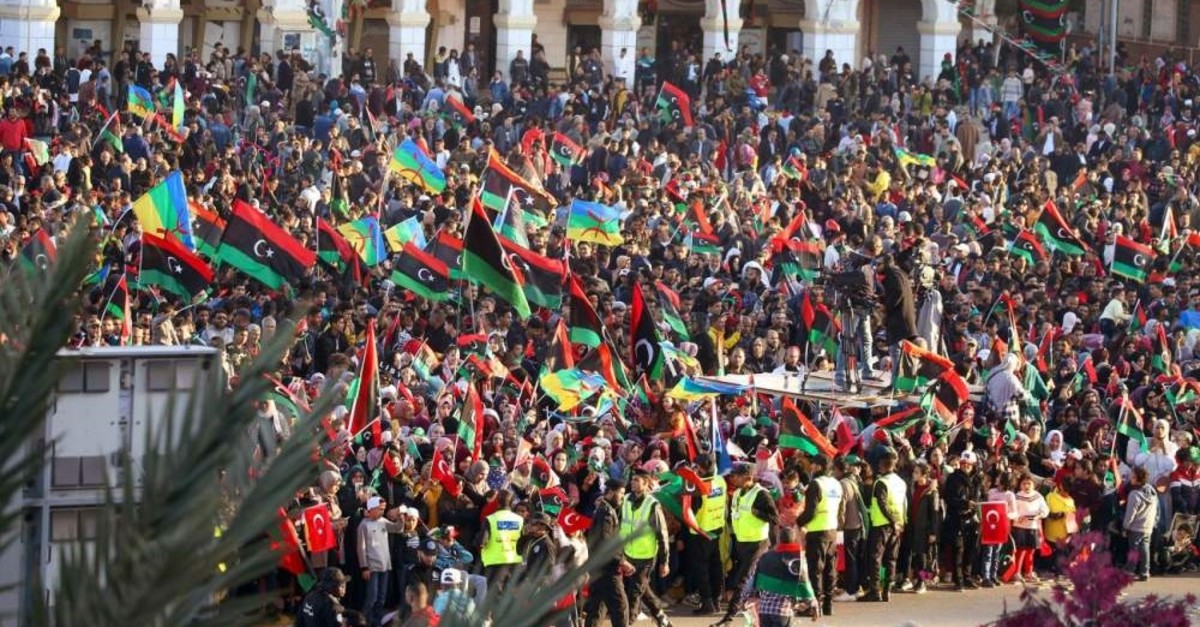 Libyans wave the national flag as they commemorate the ninth anniversary of the uprising against former Libyan leader Moammar Gadhafi, in the capital Tripoli on February 17, 2020. (Photo by Mahmud TURKIA / AFP)
by Compiled from Wire Services Feb 21, 2020 12:00 pm

Libya's warring sides have resumed talks in Geneva aimed at brokering a lasting cease-fire in the war-torn country, the U.N. said late Thursday.

"The talks are underway again," Jean El-Alam, spokesman for the United Nations Support Mission in Libya, said days after the country's U.N.-recognized legitimate government announced it was halting its participation.

The port strikes were the latest violation of a tenuous truce brokered by Russia and Turkey that came into effect in January.

The country's National Oil Company said then that the strikes hit close to a highly explosive liquefied petroleum gas tanker moored there. Haftar's forces said that they'd hit a depot for weapons and ammunition at the location.

Tuesday's strikes appeared to be the first of such attacks on the port since Haftar's forces began their siege of the city almost a year ago.

Oil-rich Libya is split between rival powers based in its east and west, each backed by an array of foreign countries. The U.N.-supported government in Tripoli is backed by Turkey and Qatar. On the other side are the eastern-based forces of Haftar, which rely on military assistance from the United Arab Emirates and Egypt, as well as France and Russia.

The first round of military talks ended with no result earlier this month, but Salame said there was "more hope" this time, mainly because of the approval of a U.N. Security Council resolution calling for a "lasting cease-fire."

Several rounds of talks focused on economic issues, including fairer distribution of Libya's oil wealth, have also taken place in Egypt and Tunisia, while talks toward a political solution are scheduled to start in Geneva on Feb. 26.

Libya has been in turmoil since a 2011 NATO-backed uprising killed longtime dictator Moammar Gadhafi, with rival armed factions still vying for power.

In the latest outbreak of fighting, Haftar launched his offensive on Tripoli last April but after rapid advances, his forces stalled on the edges of the capital.

The fighting has left more than 1,000 people dead and displaced some 140,000 according to the United Nations.

While representatives of both sides are in Geneva, President Recep Tayyip Erdoğan received Fayez al-Sarraj, head of Libya's U.N.-recognized GNA. The closed-door meeting was held in Dolmabahçe Palace in Istanbul.

At a Berlin summit last month, countries including Russia, Turkey, France and Egypt agreed to end foreign interference in Libya and respect a U.N. arms embargo.

"If the cease-fire does not continue, the transfer to a political process is very hard," Çavuşoğlu said adding: "The world condemns, but what is being done to stop Haftar?"