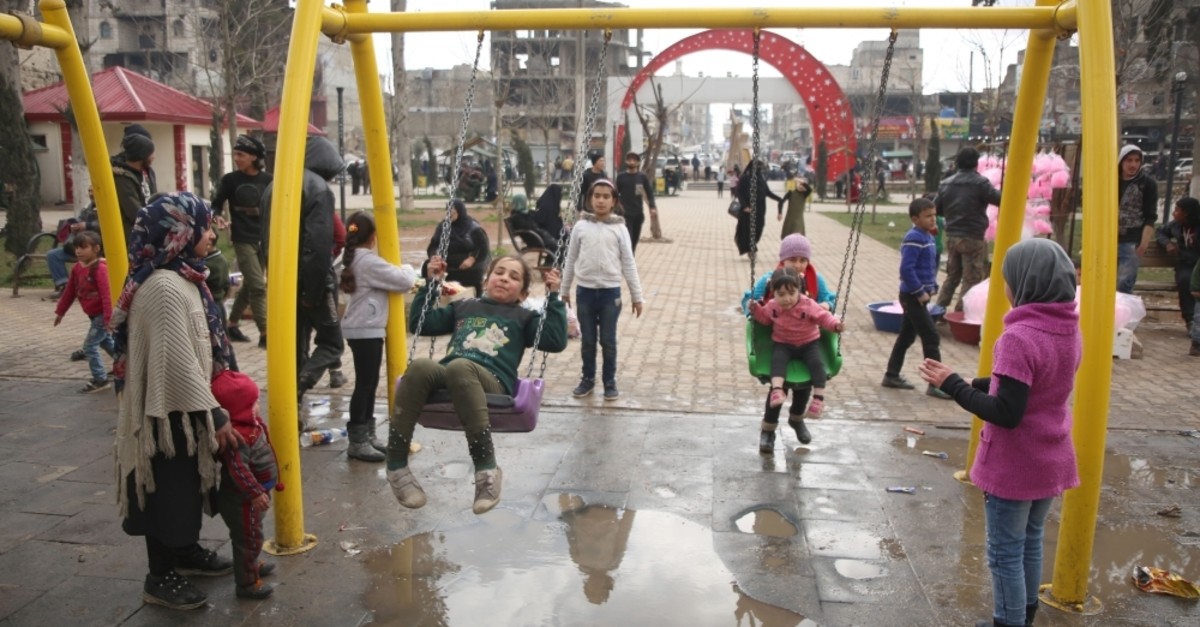 Syrian children enjoy a swing and play in a park in the city of al-Bab liberated from Daesh terrorists (AA Photo)
by Daily Sabah Feb 23, 2020 5:15 pm

The liberation of the northern Syrian city of al-Bab from Daesh terrorists in a cross-border anti-terror operation by Turkey facilitated the return of thousands of civilians once displaced by Daesh brutality. The city's residents now enjoy public services, stability and a peaceful atmosphere

Around 250,000 residents of the northern Syrian town of al-Bab, which was liberated in a Turkish cross-border antiterror operation against Daesh terrorists, live peacefully and receive public services three years after the town's liberation.

Al-Bab, which was previously ruled by Daesh terrorists, who destroyed the infrastructure and displaced thousands of civilians, is now a fully functioning city with a local council, schools, hospitals and a university, thanks to Turkey's efforts.

The city was liberated three years ago in Operation Euphrates Shield, which was carried out by the Turkish military and the Syrian National Army (SNA) – then called the Free Syrian Army (FSA).

The local council provides municipal services, including infrastructure, cleaning and environmental works, to residents who returned to their homes after the terrorists were cleared from the area, Anadolu Agency (AA) reported.

Some 65,000 students receive education in schools renovated with Turkey's support, while Gaziantep University's Faculty of Economics and Administrative Sciences also contributes to post-secondary education in the area.

Gaziantep University, located in southern Turkey close to the Syrian border, applied to Turkish education officials back in 2018 to set up four faculties in northern Syria's al-Bab, Azaz and Mare districts, which were initially planned to focus on economics, business, teaching and engineering, as some 2,700 prospective students had already taken proficiency exams.

The faculties will be the second move by Gaziantep University as it previously opened a vocational school last year in Aleppo's Jarablus district. While vocational education currently continues in five departments, the university is planning to expand it by adding four more departments and to provide education to 500 students.

Gaziantep University is not the only Turkish university that is engaged in the educational transformation of the war-torn country. In 2018, Harran University in southeastern Şanlıurfa also announced plans to establish a trilingual university faculty in al-Bab. Six departments will be opened in the first phase, and education in Turkish, Arabic and English is being provided. While the first two years of education are provided in al-Bab, the remaining two years will be completed in Şanlıurfa. In the next period, the university plans to provide all four years of education in al-Bab.

The 200-bed al-Bab hospital, which was also renovated after the operation, provides health services with the support of Turkey and Turkish physicians.

Meanwhile, al-Bab police, who received training in Turkey, ensure the security of the area, as they take care of other problems, including terrorism and traffic incidents.

The Great Mosque, one of the oldest mosques in the region, was restored with the efforts of the Turkish Foundations Directorate, while Al-Bab Sports Complex enables locals to participate in extracurricular activities in their spare time.

A local resident by the name of Zakariya Ahmad told AA that he returned to the city after Turkey's operation drove out the Daesh terrorists.

He noted that he fled to Turkey before Operation Euphrates Shield and was able to safely return to his home thanks to the operation.

"I hope Turkey also prevents attacks in Idlib and facilitates the return of civilians there," he said.

Another civilian, Abdurrazzaq Ahmad Abu Muhammad, noted that they feel euphoric to be able to return to their homes and live safely.

"During Daesh rule, al-Bab was clad in black. Thanks to Turkey's efforts the hospitals were renovated and our institutions resumed public services and security teams were set up. Thankfully our children can now go to their schools and our shopkeepers can freely sell their merchandise," Abu Muhammad told AA. He noted that the Daesh terrorists did not let their children go to schools during their oppressive rule.

In addition, the operation aimed to establish a 5,000-square-kilometer terror-free zone in northern Syria, comprised of the towns of al-Bab, al-Rai, Azaz, Jarablous and Manbij. This would allow Syrians to seek refuge from areas of conflict, without being forced to leave their country.

The town, an important crossroad and settlement in northeastern Aleppo province, was liberated from the cruel four-year-long Daesh rule on Feb. 22, 2017, by the Turkish Armed Forces (TSK) and FSA fighters.

The town's infrastructure and public buildings which were heavily damaged due to lack of maintenance, airstrikes targeting the Daesh terrorists and the final clashes before its liberation, have either been restored or completely rebuilt thanks to Turkey's efforts.

In addition to al-Bab, the towns of Jarablous, al-Rai and Dabiq were also cleared from the terrorist group in Operation Euphrates Shield. Since then, more than 300,000 Syrian refugees in Turkey have returned to their homeland, in addition to thousands of others displaced inside Syria.