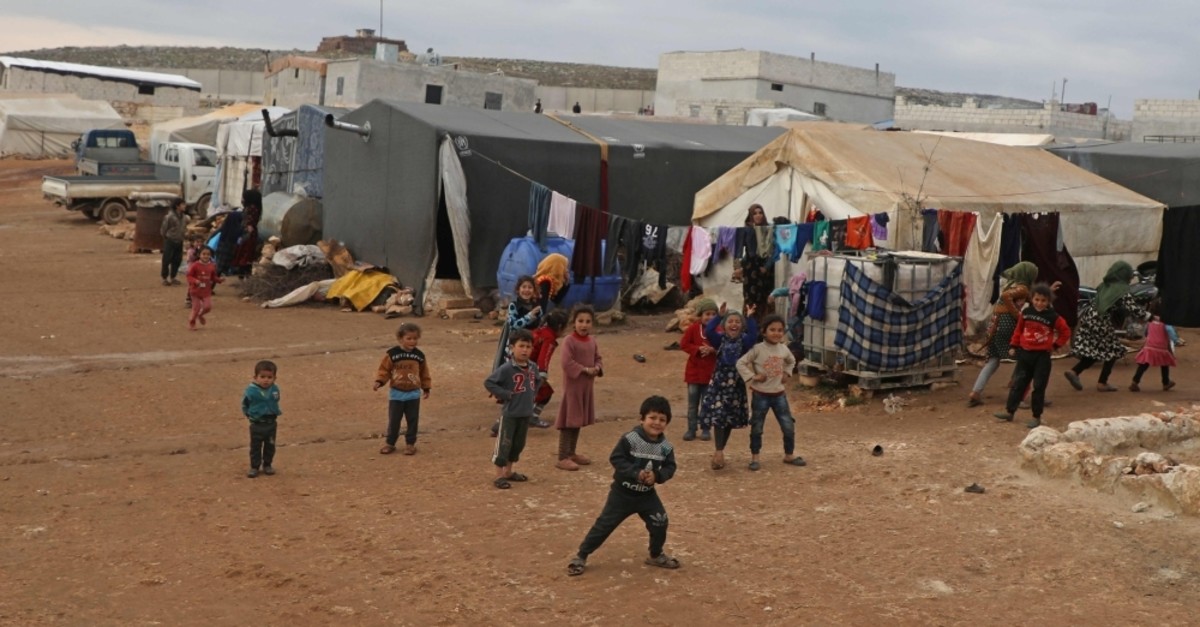 Displaced Syrian children play at an informal camp in Kafr Lusin village on the bored with Turkey in Syria's northwestern province of Idlib, on February 21, 2020. (AFP Photo)
by Daily Sabah with AFP Feb 23, 2020 2:16 pm

U.N. Secretary-General Antonio Guterres has urged the Security Council to authorize a new passage point on the Turkish border to allow humanitarian aid to reach the embattled population of northeast Syria, amid a shortage of medical supplies.

The recommendation came in a report issued Friday to council members and announced the following day.

Western members of the Security Council had asked Guterres in early January to provide new options after the council, under pressure from Russia, drastically reduced the number of border crossings authorized for delivering humanitarian aid to the hard-pressed population of the region.

Western powers had specifically asked for alternatives to compensate for the closing of the Al Yarubiyah transit point along Syria's border with Iraq.

"Several options can be made available," Guterres said in his report, "but from a security and logistical perspective, in the current context, the Tal Abyad border crossing would constitute the most feasible alternative to the Al Yarubiyah border crossing."

The secretary-general said that two other passage points on the Iraqi border – Al Walid and Fishkabur, both under YPG/PKK terror group's control – were studied but found to lack logistical capacity.

The Syrian regime had suggested another Iraqi border passage, at Abu Kamal, but it was found to also carry logistical and security problems.

Since the closing of Al Yarubiyah, only two passage points remain on the Turkish border, with both the focus of food and other aid. Considerable medical assistance had passed through Al Yarubiyah.

International aid – mainly food – has also been funneled through Damascus.

But last year not a single medical convoy for the northeast passed through the Syrian capital, the Guterres report said.

"An estimated 1.9 million people are assessed to be in need of humanitarian assistance in northeast Syria, the vast majority of whom – 1.34 million people – are in areas not under government control," Guterres said.

"Medical stocks are expected to run out in the coming months," he added.

The Security Council is slated to take up the report during a monthly meeting Thursday devoted to the Syrian humanitarian crisis.

Despite the efforts of many nongovernmental organizations from around the world, as well as countries like Turkey, the amount of aid reaching the war-torn country is still insufficient, causing the international community to have come up with new initiatives to solve the problem.

The latest idea making headlines was the opening of a fifth gate in southeastern Turkey for the purpose of delivering humanitarian aid, supported by not only by Turkey itself but also a majority of U.N. countries. However, this idea was prevented from turning into reality after being constantly rejected by Russia and China.

Turkey states that there should be a fifth border gate for the delivery of aid in the northern Syrian province of Tal Abyad; however, Russia has opposed the idea and suggested decreasing the number of border gates to just two.

Until this year, there were four border gates between Syria and its neighbors, Turkey, Iraq and Jordan.These include the Bab al-Salam and Bab al-Hawa to Turkey, Al Yarubiyah in Iraq, and Al-Ramtha in Jordan. Thanks to these gates, millions of people in Syria received humanitarian aid regularly. Russia and China's draft, however, proposed shutting down the border gates in Jordan and Iraq under the claim that they were "ineffective."