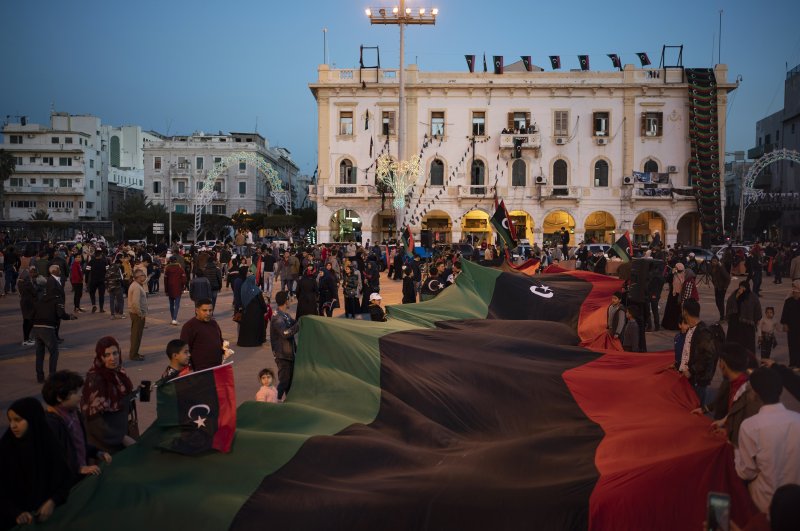 People carry a giant Libyan flag in Martyrs' Square during a march commemorating the anniversary of anti-Gadhafi protests in Tripoli, Libya, Feb. 25, 2020. (AP Photo)
by DAILY SABAH Feb 26, 2020 11:53 am
Edited By Sinan Öztürk

At least three civilians were injured Tuesday in a rocket attack on the capital Tripoli by forces loyal to eastern Libya-based putschist Gen. Khalifa Haftar, according to the Libyan government. The attack took place just one day before the U.N.-sponsored peace talks were to start on Wednesday between rival factions.

The casualties occurred when the Sabha, Salah al-Din and Ain Zara neighborhoods in Tripoli were struck, according to the media center of the government's "Volcano of Rage" operation against Haftar's forces.

A total of seven rockets were fired, with one of them falling close to a hospital in Salah al-Din.

Fighting has continued on the ground despite a call for a truce by Turkey and Russia starting on Jan. 12 and an international summit on Libya in Berlin on Jan. 19 aimed at reducing international interference and establishing an arms embargo.

The Tripoli-based internationally recognized Government of National Accord (GNA) has been under attack by Haftar's forces since last April, with more than 1,000 lives lost in the violence.

Since the ousting of late ruler Moammar Gadhafi in 2011, two seats of power have emerged in Libya: Haftar in eastern Libya supported mainly by Egypt and the UAE, and the GNA in Tripoli, which enjoys U.N. and international recognition.