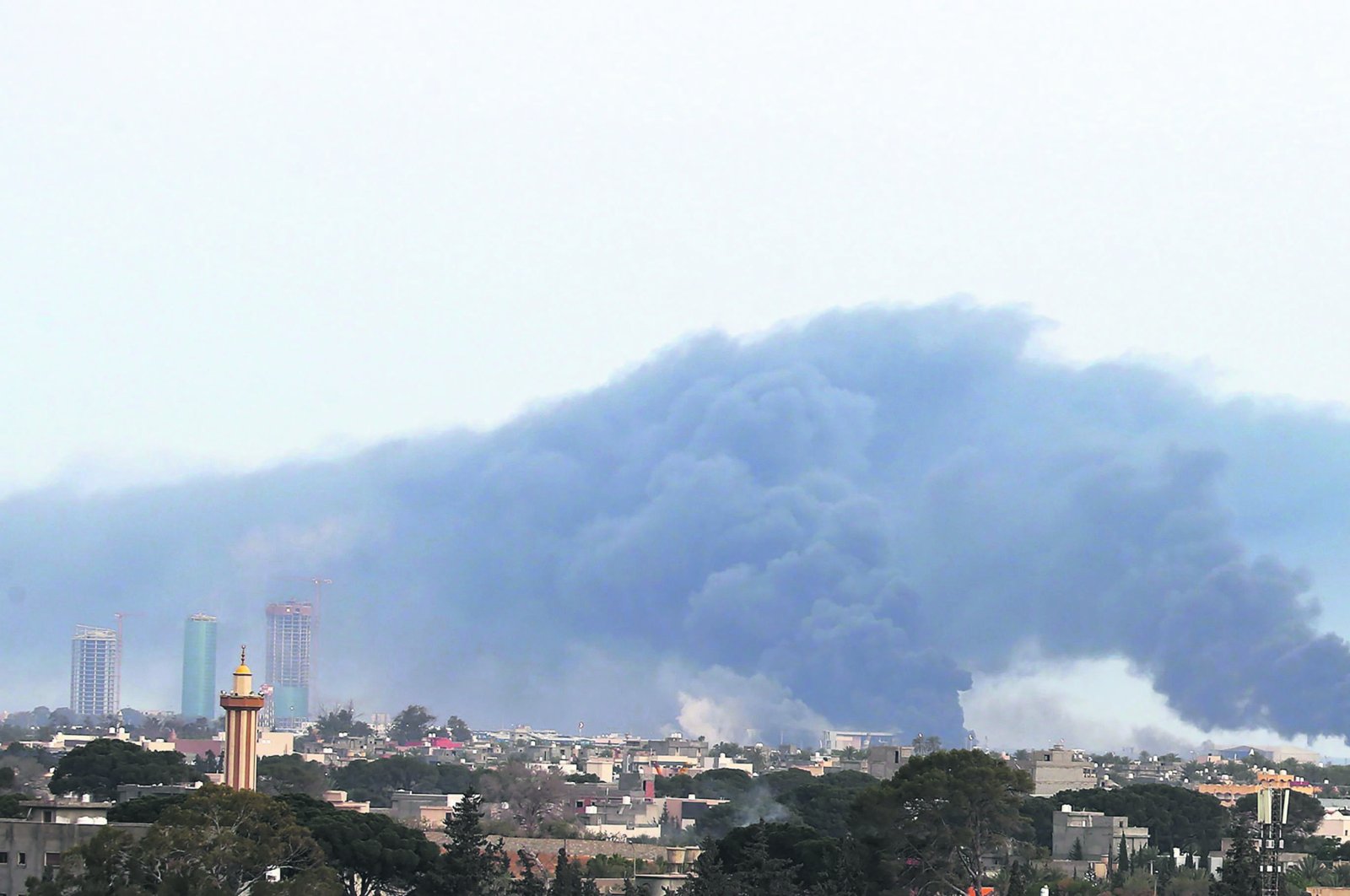 Smoke plumes rise above buildings in the Libyan capital Tripoli, during reported shelling by putschist Gen. Khalifa Haftar's forces, May 9, 2020. (AFP Photo)
by DAILY SABAH WITH AGENCIES
May 31, 2020 7:11 pm

A grassy area used as a park in the Libyan capital Tripoli was hit by Haftar shelling on Sunday that left five people dead and 12 others wounded, an official and a medic said.

The incident highlighted a continuing risk to civilians despite a relative lull in fighting around Tripoli since warlord Khalifa Haftar's staged partial withdrawals earlier this month.

The U.N. mission to Libya has condemned "indiscriminate attacks" on civilian areas of Tripoli which it says are mostly attributable to forces affiliated with Haftar's militia.

Amin al-Hashemi, a spokesman for the Libyan Health Ministry, said in a written statement that the rockets hit a residential area, without any information on injured.

Sunday's shelling hit an expanse of grass that residents often use to relax on the edge of the Hay al-Andalus neighborhood, west of central Tripoli.

Ameen al-Hashimi, a press officer for the Tripoli government's health ministry, told Reuters five people, two of them unidentified, had been killed, and 12 wounded.

Osama Ali, a spokesman for local ambulance services, said four of the casualties had been killed at the grassy area and one other at a second, nearby location.

In an official statement, the Libyan government said the two stressed that attacks by the militia loyal to putschist Gen. Khalifa Haftar on capital Tripoli must stop.

Foreign Minister Mevlüt Çavuşoğlu also spoke with Deputy Prime Minister Ahmed Maiteeq according to diplomatic sources.
Haftar intensified attacks on civilians at the beginning of May as the Libyan army recently advanced and inflicted severe losses on his militants.

In the first week of May, forces linked to Haftar struck civilian settlements, killing 15 and wounding 30. Fourteen civilians were killed in attacks targeting Tripoli on May 5-7.

Meanwhile, Libyan government forces pounded positions of warlord Haftar's militias at Mitiga International Airport, south of the Libyan capital, according to the military on Sunday.

Three armored vehicles belonging to Haftar were destroyed in the artillery attacks, the government-led Operation Volcano of Rage said in a statement.

Military spokesman Mohammed Gununu called on members of Haftar's militias to lay down arms, pledging a fair trial for those who surrender.

The call came one day after government forces said they were advancing in several areas near Mitiga airport.

The internationally recognized Libyan government has been under attack by Haftar's forces since April 2019. The GNA launched Operation Peace Storm on March 26 to counter attacks on the capital.

While France, Egypt, Russia and the United Arab Emirates support Haftar, directly or indirectly, Turkey has shown solidarity with the U.N.-recognized, legitimate government representing the will of the Libyan people.

Following the ouster of late ruler Moammar Gadhafi in 2011, Libya's new government was founded in 2015 under a U.N.-led political agreement.