After a decade of civil war, Syria now faces threat of coronavirus 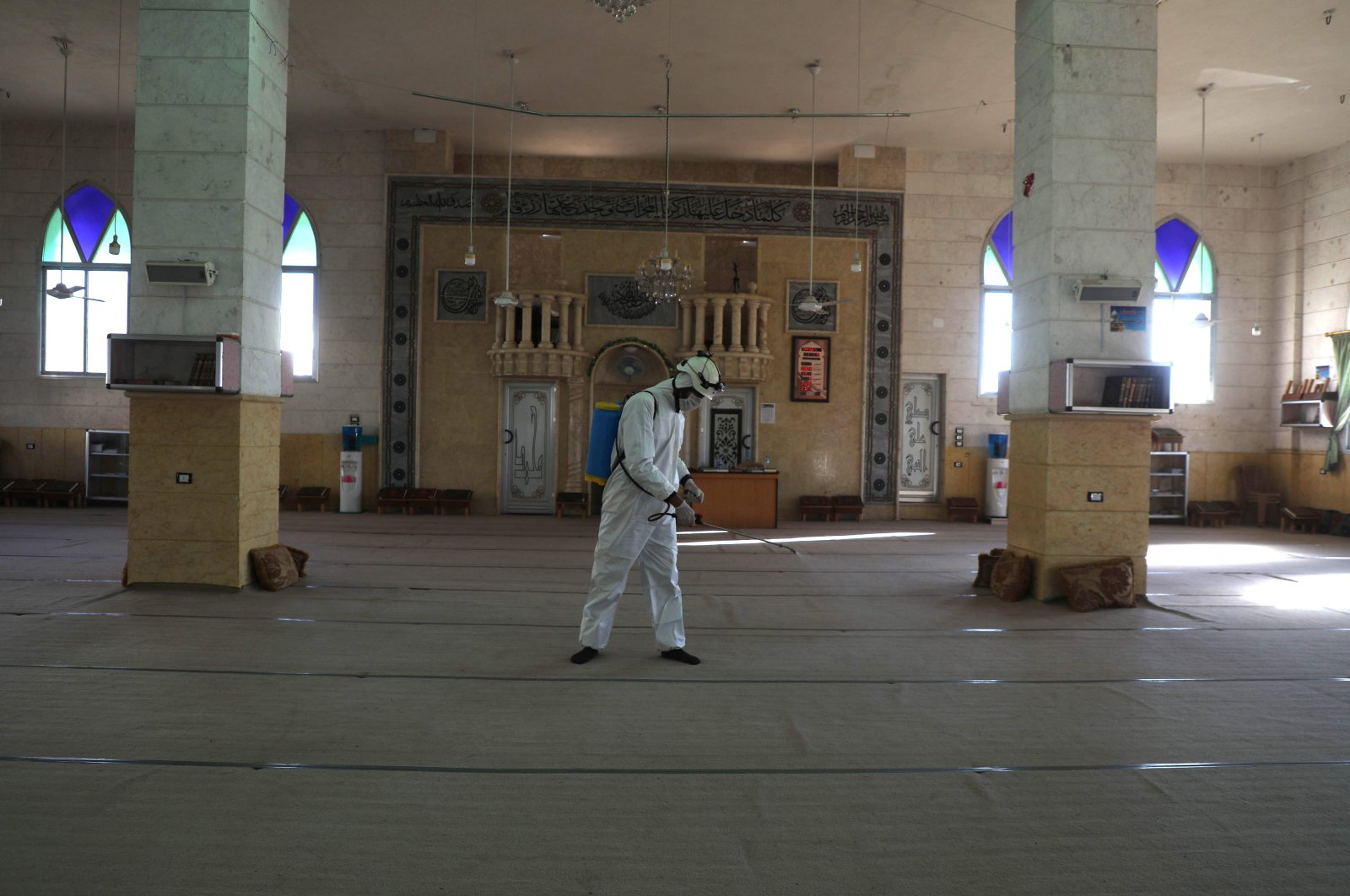 A member of the Syrian Civil Defence known as the "White Helmets" disinfects the interior of a mosque, as part of preventive measures taken against infections by the novel coronavirus, in the Syrian town of Dana, east of the Turkish-Syrian border in the northwestern Idlib province, Sunday, March 22, 2020. (AFP)
by Compiled from Wire Services Mar 24, 2020 11:59 am
RECOMMENDED

Inspiring fear and anxiety around the globe, the coronavirus outbreak has also impacted vulnerable, conflicted regions as well, particularly Syria, a country that has been struggling with civil war for nine years. Since the revelation of the first case in the war-torn country, panic has spread among millions of Syrians, while humanitarian groups express concern over the country's lack of health infrastructure and its after-effects.

The Syrian regime announced Sunday its first case after unconfirmed reports suggested the virus had been detected but covered up, a charge officials have denied, while rolling out tight measures as the disease swarmed neighboring countries.

In the opposition-held northwest, no cases have been confirmed, but patients have been showing possible symptoms for weeks. Some 300 test kits are expected to arrive in the next two days, the World Health Organization (WHO) and a medics group said.

"Health infrastructure and basic services have all been decimated over much of the country ... and Syrians are very likely to be some of the most vulnerable to the spread of the virus globally," said Rachel Sider, a policy and advocacy adviser for the Norwegian Refugee Council, to Reuters.

"What's very clear is they're nowhere near ready for an outbreak," said Sider.

Syrians rushed to stock up on food and fuel Monday amid fears that authorities would resort to even stricter measures after reporting the first coronavirus infection in the country, where the health care system has been decimated by nearly a decade of civil war.

In Damascus on Monday, crowds of pedestrians, many in masks, still filled some streets, despite curbs like shutting schools and businesses, banning public transport and suspending flights.

Samer Khodr, head of Damascus Hospital, said all private and public hospitals across the country were ready under a national plan to tackle the virus.

Syria's health care system has been ravaged by nearly a decade of war that has displaced millions of people and created rampant poverty. Hospitals and clinics across the country have been destroyed or damaged. The regime is also under heavy international sanctions linked to its conduct during the war.

The pro-regime daily Al-Watan quoted China's ambassador as saying that Beijing has given Syria equipment to test 2,000 people for the coronavirus. Residents say prices of disinfectants and masks have skyrocketed in the capital, where panic buying has also gripped shoppers in recent days.

The city’s Hamidiyeh souk, a network of covered markets running through the Old City, was deserted after the regime ordered all shops closed on Sunday.

The regime closed border crossings with Lebanon and Jordan, and Damascus International Airport was closed to commercial traffic after a final flight arrived from Moscow. Regime-run newspapers issued their last print edition and will only be available online.

The head of a local Damascus-based nongovernmental organization said there was limited capacity to determine cases, with only one main lab testing for the virus so far. Some cases were being treated in military hospitals, the person added, asking to remain anonymous.

Despite just a single case declared, it is believed that the virus was likely more widespread than known, owing to low testing capacity and lack of transparency.

The Syrian Observatory, a Britain-based war monitor, said doctors had received threats from the regime not to disclose cases. "Doctors have been instructed to refer to cases that are suspected to be corona infections as severe pneumonia," said its director Rami Abdulrahman.

A U.N. source said three Syrians who tested positive over the weekend in Beirut, which is trying to contain a coronavirus outbreak, had recently arrived from Syria.

The regime has denied covering up any cases, though close ties with its top regional ally Iran, the worst-hit country in the Middle East, had increased the likelihood of the virus gaining a foothold. The two countries have strong ties as Iran backs regime forces, letting their proxy groups act side by side with them, attacking civilians in the war-torn country.

In parts of Syria outside the regime control, Turkey-backed opposition groups in the northwest have also closed crossings.

Displaced Syrians in the northwest live in overcrowded makeshift camps, leaving medics worried that an outbreak would be particularly lethal.

A Russian-backed Syrian regime offensive there has uprooted nearly 1 million people in recent months and left its infrastructure in tatters.

Ahmad al-Dbis of the U.S.-based medical charity UOSSM, which operates in opposition territory, said fighting in the past year has destroyed much of the region's medical facilities and left a stock of only 175 ventilators.

"Countries like Italy, France, Spain and others couldn't escape from the coronavirus crisis so what will it be like for northwest Syria?" said Dbis.

The arrival of test kits this week, though limited, in opposition-held territory will allow doctors to finally begin checking for the virus. A handful of tests have already been shipped to Turkey for laboratory results but so far, none of the tests have come back positive.

"There are many cases coming to facilities and hospitals with the symptoms, but we don't have the capacity to make the diagnosis," said Bashir Taj Aldin, a doctor with the Syrian American Medical Society, which operates in Idlib.

Humanitarian organizations warned Wednesday of dramatic consequences if the new coronavirus infects refugees stranded in northern Syria due to violence.

"As brutal as it sounds, you will almost have to expect mass extinction," if the virus reaches areas in northwestern Syria, Dirk Hegmanns, the regional director for Syria of the German Welthungerhilfe (World Hunger Aid) organization, said.

He told dpa that a regime offensive, which started against the opposition province of Idlib in northwestern Syria in late April, had destroyed dozens of hospitals.

The health care sector in the region is already burdened with treating those injured in the violence there, he said.

In the same vein, the medical charity Doctors without Borders (MSF) warned that a spread of the virus in northwestern Syria could result in a rapidly deteriorating situation if additional support and measures are not put in place.

The MSF is supporting local health authorities in northwestern Syria to prepare for a potential outbreak, Dold told dpa.

The WHO said it was extremely concerned about the impact of potential cases of COVID-19 in northwestern Syria.

Refugees in the area are living under conditions that make them vulnerable to respiratory infections, the WHO said in a statement.

The organization cited overcrowded living conditions, physical and mental stress and deprivation due to lack of housing and clean water.

"The WHO is preparing for the contagion across Syria, prioritizing prevention, preparedness and risk communication, with a focus on supporting health responders to detect, diagnose and prevent spread," Hedinn Halldorsson, the agency's spokesman, told dpa.

The White Helmets, a voluntary nongovernmental group working in Syria's opposition areas, and the local Attaa Humanitarian Relief Society said they had embarked on prevention campaigns among the refugees and residents in Idlib.

Malek Taleb, an Attaa official in Idlib, said "large crowding, malnutrition, the use of shared water tanks and the poor housing" prompted the organization to plan information campaigns to educate the refugees on preventative measures.

"We will be carrying out intensive awareness campaigns starting Friday in coordination with health associations in northwestern Syria," Raed Saleh, the White Helmets head, told dpa.

Turkey also has helped in the fight against the coronavirus in Syria. Turkey's Communication Directorate delivered an information brochure in Arabic on Friday to help Syrians protect themselves against the virus.

The Health Ministry's Syria Mission Force teams in the geographical areas covered by Operation Peace Spring, Operation Olive Branch and Operation Euphrates Shield have been delivering the six-page brochure to every household and individually informed residents.

Nearly 500,000 brochures will be delivered by teams in the three regions.

Turkish Health Ministry Syria Coordinator Ümit Mutlu Tiryaki said troops are looking at the health of those at the border and disinfecting some vehicles.

Ten samples were sent to Turkey from Tal Abyad and Ras al-Ayn.

"So far, there has not been any positive COVID-19 test results. We are happy there is no any case in the region," he said.

Muhammed Abdo, a resident of Hammam village in Afrin, said the brochures are very helpful and thanked Turkey for efforts in the region.