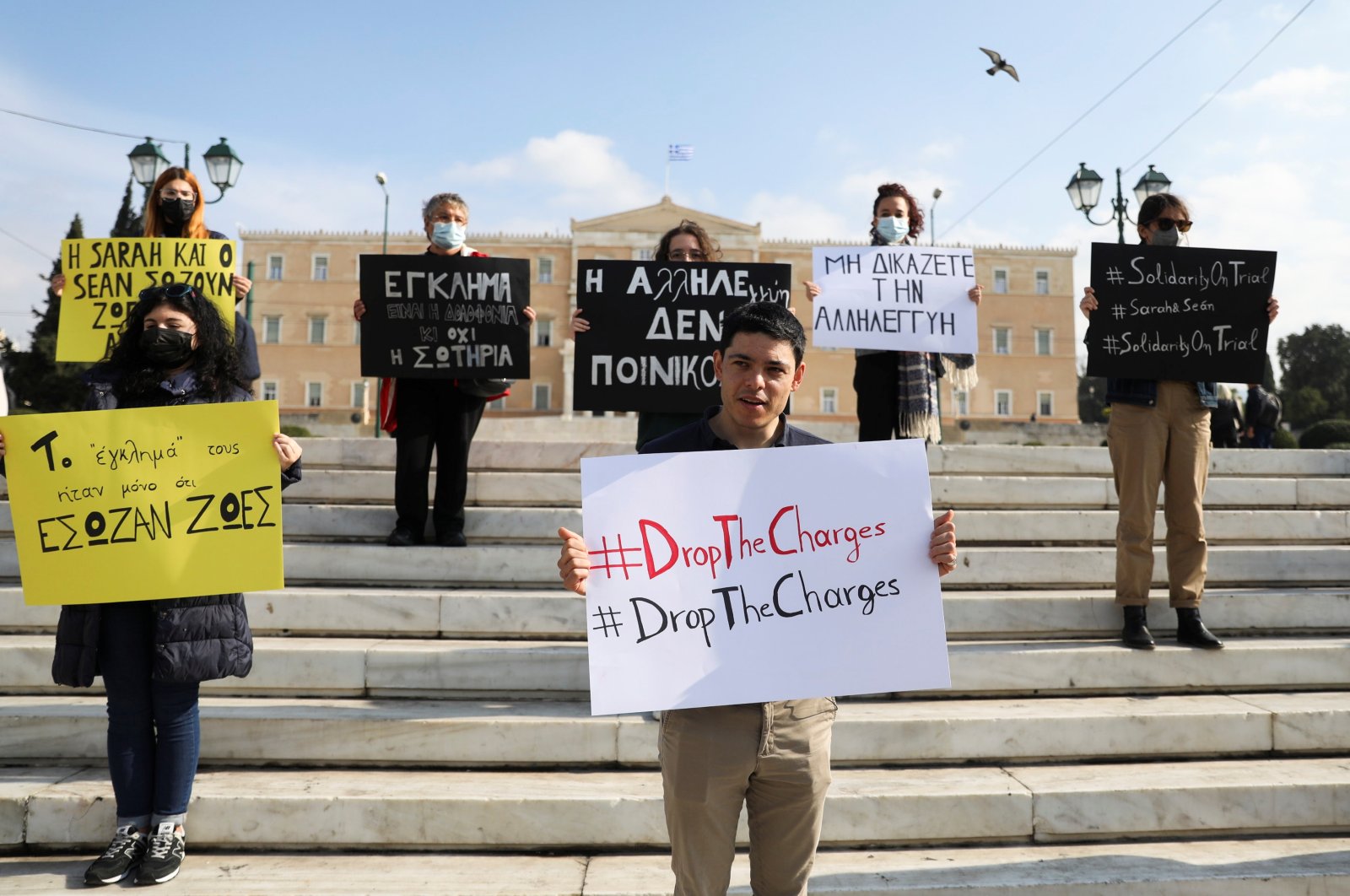 Sean Binder holds a placard during a demonstration by Amnesty International activists in solidarity with aid workers on trial over refugee rescues, outside the parliament building, in Athens, Greece, Nov. 15, 2021. (Reuters Photo)
by Anadolu Agency Nov 19, 2021 10:28 am
RECOMMENDED

Amnesty International slammed Greece on Thursday for trying two dozen humanitarian workers in court on espionage charges related to their role in helping refugees enter the country between 2016-2018.

Among the humanitarian workers who were charged by Greek authorities were Syrian-born swimmer Sarah Mardini, whose sister Yusra was part of the refugee swimming team at the 2016 Olympic Games in Rio de Janeiro, German-national Sean Binder, a well-known refugee rights defender and 73-year-old Dutch national Pieter Wittenberg. Due to a travel ban imposed on Mardini, she has not been able to attend her own trial. The court on Lesbos Island decided Thursday to adjourn the case involving the 24 humanitarian workers. Reacting to the decision,

Amnesty International argued that it leaves the lives of the workers in limbo.

"These trumped-up charges are farcical and should never have resulted in Sarah and Sean appearing in court," said Giorgos Kosmopoulos, senior campaigner on migration for Amnesty International. He on behalf of Amnesty International urged the Greek authorities to uphold their human rights obligations and to drop the charges against the defendants.

"We stand alongside Sean and Sarah and will continue campaigning until justice is fully delivered, their human rights are respected and upheld and all charges against them dropped," he said.

The humanitarian workers were affiliated with Emergency Response Center International (ERCI), a non-profit search-and-rescue group that operated in Lesbos, which was then one of the hot spots of Europe's refugee crisis with scores of asylum-seekers arriving daily on its shores from 2016 to 2018. The defendants deny the charges against them, for which they could face up to 25 years in prison. A report published in June by the European Parliament called the trial "the largest case of criminalization of solidarity in Europe." Rights groups including Amnesty International and Human Rights Watch claim the trial is intended to intimidate aid workers and call the charges politically motivated.

Turkey and Greece have been key transit points for migrants fleeing war and persecution, looking to cross into Europe to start new lives. Turkey has accused Greece of large-scale pushbacks and summary deportations without migrants being given access to asylum procedures, which is a violation of international law.

It also accuses the EU of turning a blind eye to this blatant abuse of human rights. Pushbacks are considered contrary to international refugee protection agreements that dictate that people should not be expelled or returned to a country where their life and safety might be in danger due to their race, religion, nationality or membership in a social or political group.Various human rights organizations have also documented and criticized Greece's violent migrant policies.In a report published in September, the European Union's Fundamental Rights Agency (FRA) revealed that migrants continue to be subject to difficult conditions and violations of their rights in detention and reception centers at EU borders. The report also noted that pushing migrants back to Turkey has become the de facto border policy of Greece and that torture, ill-treatment and pushbacks continue.

A Dutch journalist who earlier this month accused Greek Prime Minister Kyriakos Mitsotakis of lying about migrant pushbacks said Wednesday she plans to leave Greece out of concern for her safety after she became the target of pro-government media. "I am being targeted and threatened by pro-government media and extreme right factions," Ingeborg Beugel told the Dutch online newspaper NU. "Mitsotakis is not used to direct questions and responded in a very authoritarian manner. He thought he had managed to silence the press for the past two years," said Beugel.