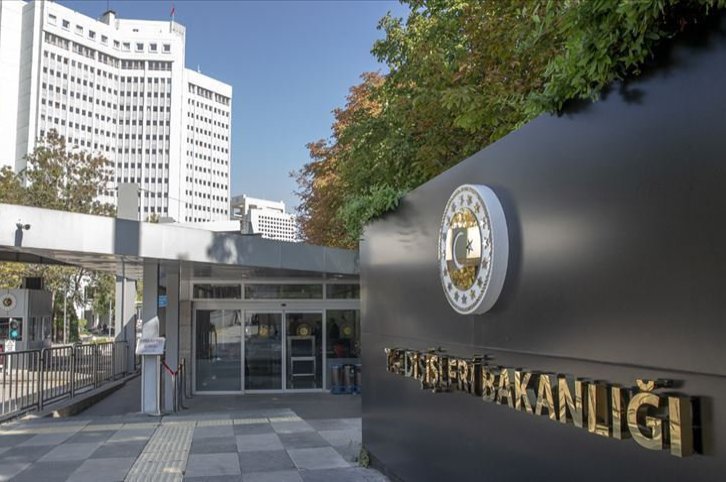 Ankara on Tuesday strongly condemned the burning of Turkey's flag in front of the Turkish Consulate in occupied east Jerusalem.

"We strongly condemn the burning of our flag during a demonstration held near the Consulate General of Turkey in Jerusalem on July 13, 2020," the Foreign Ministry said in a statement.

“No one has the right to desecrate our glorious flag. We demand the perpetrators of this heinous act be brought to justice as soon as possible and held accountable,” the statement added.

A group of nine Israelis on Monday burned the Turkish flag in front of Turkey’s Consulate in the occupied east Jerusalem to protest Turkey's decision to turn Istanbul's iconic Hagia Sophia back into a mosque.

The group, calling itself the Jerusalem Initiative, comprises of Christians, Jews, and at least one person from the Israeli army, the group's head Elias Zarina told Anadolu Agency (AA).

Group members waved the flags of Greece and the Byzantine Empire and hung banners with anti-Turkish slogans outside the consulate.

Israeli police detained the person who burned the Turkish flag.

Turkey’s top administrative court on Friday annulled the 1934 government decree that turned Hagia Sophia into a museum. This verdict by the country's Council of State paved the way for its use again as a mosque after an 85-year hiatus. Before that, it had been a mosque for nearly 500 years.

President Recep Tayyip Erdoğan said the historical complex will be ready for worship with Friday prayers on July 24.

Turkey has rejected outside attempts to interfere in its decision on Hagia Sophia, saying they seek to harm the country's sovereignty.