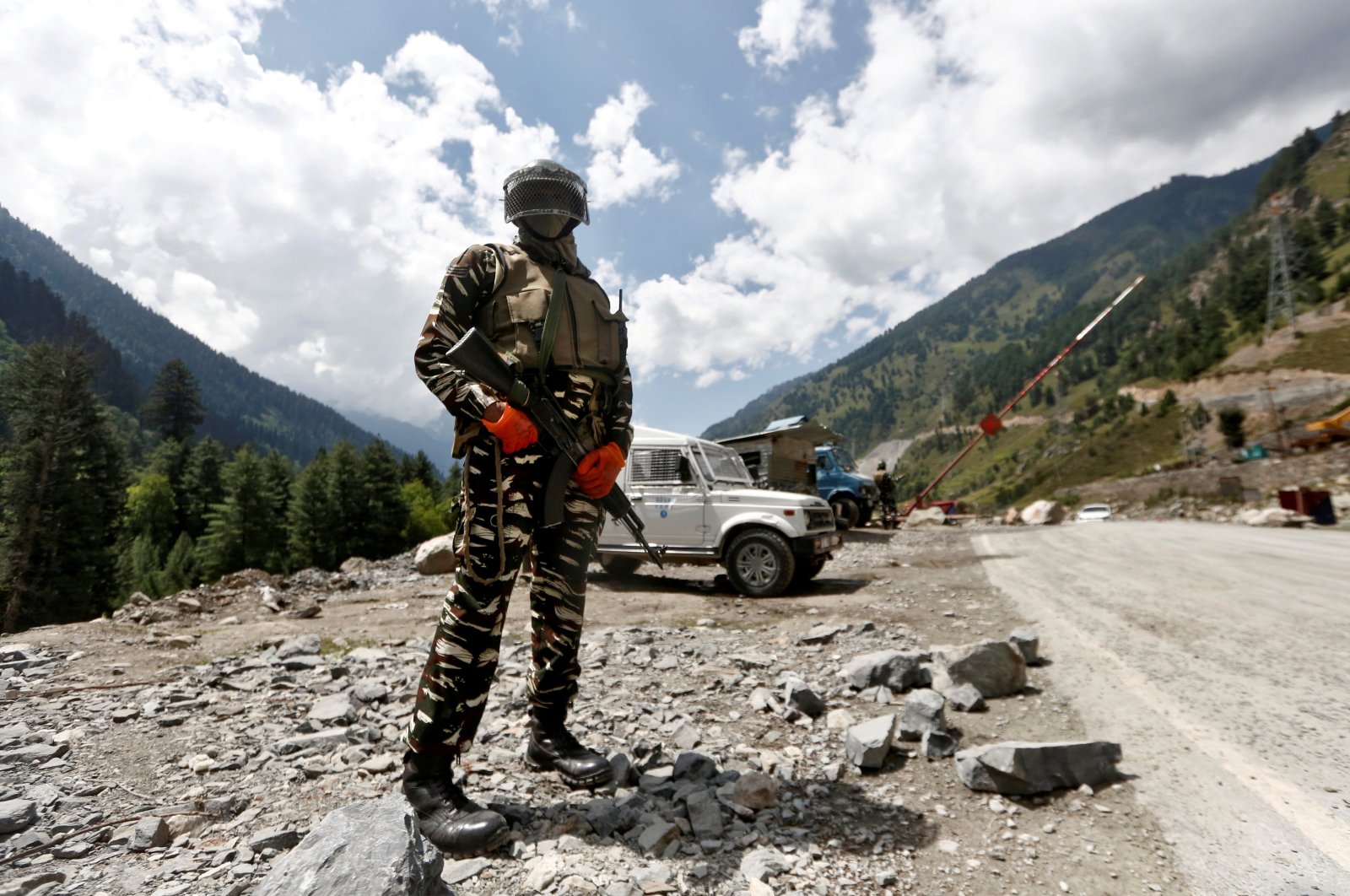 A member of the Indian Central Reserve Police Force (CRPF) stands guard at a checkpoint along a highway leading to Ladakh, at Gagangeer in Kashmir's Ganderbal district, Sept. 2, 2020. (REUTERS)
by Anadolu Agency Sep 16, 2020 1:24 pm
RECOMMENDED

Turkey Tuesday reiterated its call to the Indian government to ease current restrictions in the Jammu and Kashmir regions.

"We sincerely desire that the Kashmir issue be resolved through peaceful means between India and Pakistan on the basis of the relevant U.N. resolutions," read a statement by Turkey at the 45th Session of the Human Rights Council in Geneva.

Last year on Aug. 5, India scrapped the state's autonomous status, dividing it into two federally ruled territories. To forestall protests, thousands of people, including political leaders, have since been jailed.

A communications and security lockdown was also enforced, which continues in various forms to date.

High-speed internet has been restored only in two of the 20 districts of Jammu and Kashmir. A number of journalists were also arrested under harsh anti-terror laws.

The statement also underlined that the COVID-19 pandemic, economic and financial problems, ongoing military offensives by the forces of Syria's Bashar Assad regime and terrorist attacks on civilians have worsened the already unbearable situation in the country.

"Israel continues to act with absolute impunity in the occupied Palestinian territories," the statement added.

"The inhumane blockade sustained by Israel stands as the heaviest hurdle for the individuals in Gaza for the enjoyment of their most basic human rights," it added.

Israel Tuesday formally signed agreements with representatives for Bahrain and the United Arab Emirates (UAE) to normalize relations during a White House ceremony presided over by U.S. President Donald Trump.

Bahrain became the fourth Arab country to establish diplomatic relations with Israel last Friday after Egypt in 1979, Jordan in 1994 and the UAE in August.

Palestinians staged a series of rallies Tuesday in the West Bank and Gaza Strip against the controversial agreements.

"Human rights violations in Myanmar, especially the crimes committed against Rohingya, continue to be a source of serious concern for Turkey," the statement said.

According to Amnesty International, more than 750,000 Rohingya refugees, mostly women and children, fled Myanmar and crossed into Bangladesh after Myanmar's forces launched a crackdown on the minority Muslim community in August 2017, pushing their numbers in Bangladesh above 1.2 million.

More than 34,000 Rohingya were also thrown into fires, while over 114,000 others were beaten, said the agency report titled "Forced Migration of Rohingya: The Untold Experience."

As many as 18,000 Rohingya women and girls were raped by Myanmar's army and police and over 115,000 Rohingya homes were burned down, while 113,000 others were vandalized, it added.