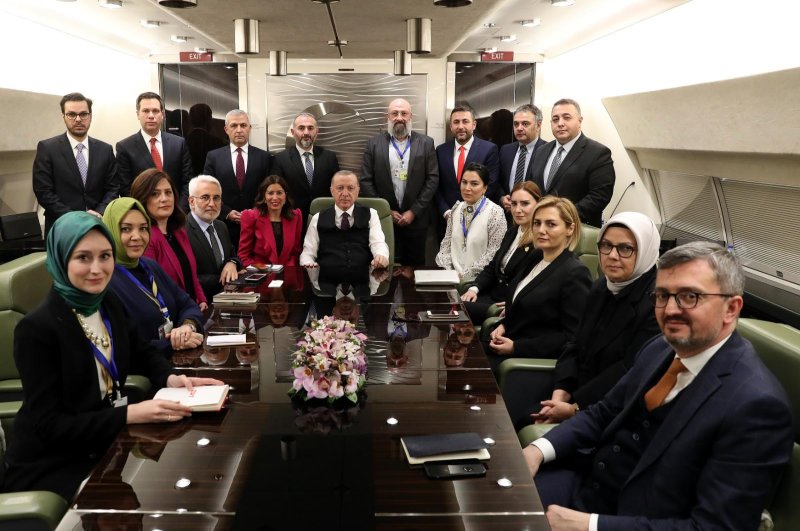 Turkey's presence in Syria hinges on legitimate reasons and it won’t allow any change to terms of Sochi deal, President Erdoğan says

Turkey has no intention to renegotiate the Sochi deal reached with Russia, President Recep Tayyip Erdoğan said Wednesday. He warned the Bashar Assad regime of the approaching deadline for withdrawal from the delineated zone.

“Our deadline for the regime is approaching. After the end of the month, we will do anything we can to secure our observation points,” Erdoğan said at the ruling Justice and Development Party’s (AK Party) parliamentary group meeting, highlighting Turkey’s determination to find a solution to the ongoing crisis in Idlib.

Earlier this month, Erdoğan warned the regime to retreat beyond the Turkish military observation posts by the end of the month, pledging that Turkey would push the regime forces away on its own if necessary.

“We told them to retreat to the south, and we would do whatever necessary if they don't. It is not possible for us to compromise on this issue,” the president said in another interview with journalists accompanying him on the presidential plane on his way back from an official visit to Azerbaijan.

Earlier this month, the Turkish army launched a huge deployment to Idlib after 13 Turkish soldiers were killed in the regime attacks. During the last week’s meeting between Turkish and Russian delegations in Moscow, Russia reportedly proposed a map that moves the Sochi deal borders north of the strategic M4 and M5 highways, thus putting 60% of Idlib under regime control. However, Turkey said it will make no concessions on its observation points. Along with many European officials and the U.N, Ankara is concerned about the civilian displacement in Idlib due to regime operations, which could trigger a new mass exodus to the Turkish border and Western countries.

Erdoğan underlined that the Turkish army is not an invasion force in Syria since it was invited by Syrian people to the country.

“We have a legitimate presence in Syria, a right that is given to us with Adana agreement. We try to (protect) the area from terrorist organizations, while U.S. and Russia do not abide by their promises on the issue,” Erdoğan noted.

The Adana agreement was signed between Turkey and Syria in October 1998, which stated that Syria would not allow any PKK activities within its borders and would block any terror activities that would threaten Turkey's sovereignty. However, with U.S. support and Russia’s indifference, the terrorist organization established an autonomous rule in northern Syria, near the Turkish border, taking advantage of the power vacuum arising due to the collapse of the regime’s authority.

“We use our rights emanating from the Adana agreement. We have a 911-kilometer border with Syria and are sheltering 4 million Syrians who fled from the regime’s barrel bombs. Have those who ceaselessly (carry out) bombing there pitched a single tent in Syria?” Erdoğan said.

Stating that there is no agreement on a quartet meeting between Turkey, Russia, Germany and France, Erdoğan said he will come together with Russian President Vladimir Putin nevertheless on March 5, possibly in Istanbul.

Regarding the 25 million euros ($27.2 million) in aid promised by Germany to be spent for Syrian refugees' accommodation, Erdoğan said the amount has not been provided yet.

“They said the U.N. has not approved the money. Merkel had told me it is ready to be delivered. People live in mud in Syria, but they couldn’t deliver 25 million euros. However, we continue our intense efforts to provide housing for refugees 25-30 kilometers deep in northern Syria,” he said.

Stressing that he may hold a phone call with U.S. President Donald Trump in the upcoming days on Idlib, Erdoğan ruled out the possible delivery of Patriot missiles near Syrian borders.

Some reports suggested earlier this month that Turkey might deploy Patriot missiles to the southeast to prevent the regime’s aggression.

Noting that 14 agreements were inked between Turkey and Azerbaijan during his visit, Erdoğan said bilateral trade has reached $4.5 billion, and the aim for 2023 is to hit $15 billion.

“We implemented big projects such as the Baku-Tblisi-Kars railway and TANAP. Our bilateral investments are growing every day and we have a strong collaboration in the defense industry,” he said.

The president also underlined that Turkey is in complete solidarity with Azerbaijan regarding the Nagorno-Karabakh conflict.

“Minsk talks have been ongoing as a delaying process for 25 years. Neither the U.S. nor Russia has resolved the issue yet. The occupied territories should be free,” the president said.

Four U.N. Security Council and two General Assembly resolutions, as well as decisions by many other international organizations, refer to this fact and demand the withdrawal of the occupying Armenian forces from Nagorno-Karabakh and seven other occupied regions of Azerbaijan.

Speaking on the rise of far-right terror in Germany and the recent attack in Hanau, Erdoğan said despite expressing concerns to German authorities on the issue, their response shows that they are not sensitive enough to the issue.

“As you can see, all the 11 killed civilians were Muslims, five of whom were also Turks,” Erdoğan reminded. He stated that although most German politicians expressed condolences over the incident, the words alone do not mean anything, and concrete measures are needed.

The president further underlined that such aggression against Muslims not only occurs in Germany but in Europe as a whole.

“Same thing happens in the U.K. as well. As you know, they attacked our mosque. These (attacks) do not happen in only one place. They are happening in both Germany and France. Belgium, on the other hand, is like a center of such attacks. None of these countries pose a contrary stance against terrorism,” he emphasized.