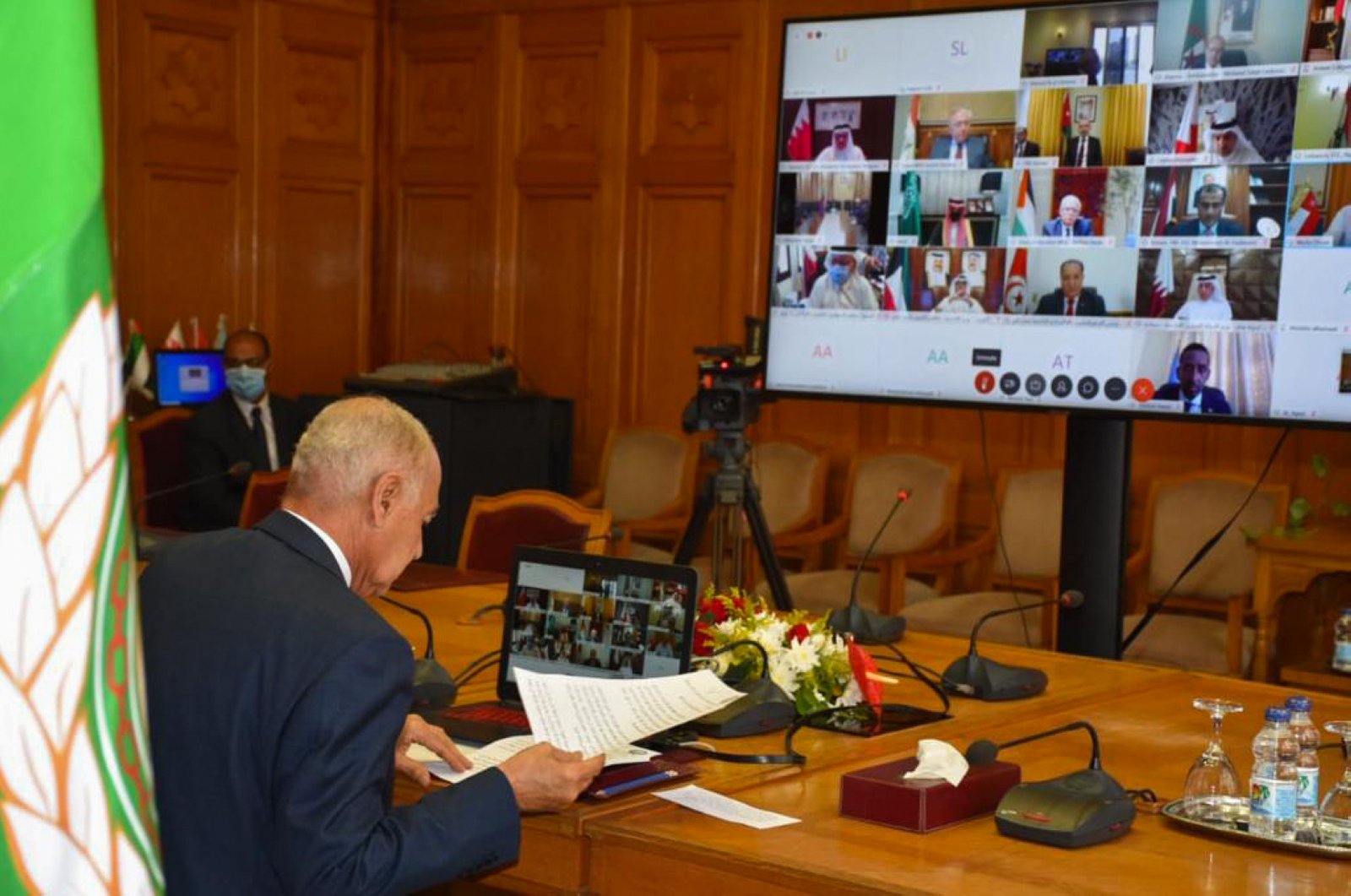 The Arab League on Tuesday called for Libya’s warring parties and their foreign backers to halt fighting and restart peace talks, as regional tensions threaten to spark a new escalation in the oil-rich country’s yearslong conflict.

Following an emergency meeting requested by Egypt, Arab League foreign ministers warned against a “continuation of military action that alters existing front lines." The statement came as a coalition of Turkish-backed government forces based in the capital, Tripoli, pushed toward the key coastal city of Sirte.

The meeting was attended by representatives from 21 Arab countries, including Libya's internationally recognized Government of National Accord (GNA), which had opposed the meeting earlier this week.

The 14-clause resolution submitted by the Arab League provided for "rejecting all illegitimate foreign interventions" in Libya and called for "the withdrawal of all foreign forces on Libyan territories and its regional waters."

Over the years of war, Libya has become divided between west and east, with the U.N.-supported GNA based in Tripoli, in the west. Haftar is based in the eastern city of Benghazi.

Turkey has escalated its support in recent months for the Tripoli-based government, supplying armed drones and military experts. Its efforts have rattled some regional actors, especially Egypt, which shares a long and porous desert border with Libya.

The refusal by Tripoli and the Turkish-backed forces to back down stirred fears of a wider war over the weekend when Egyptian President Abdel-Fattah el-Sissi called Sirte a “red line” and threatened to intervene directly on behalf of Haftar’s forces if the city came under attack.

The Tripoli-based government said it considered el-Sissi’s comments a “declaration of war,” while Haftar allies in the east welcomed his support.

The speaker of Libya's east-based, Haftar-aligned parliament urged Egypt on Wednesday to make good on its threat to send troops to fight rival, Turkish-backed Libyan government forces in case of their attack on the strategic city of Sirte, the Egyptian state news agency reported.

Aguila Saleh, speaker of the east-based House of Representatives, was quoted by Egypt's MENA news agency as saying that an Egyptian intervention in Libya would be “legitimate" if the GNA's forces crossed the "red line" determined by el-Sissi.

El-Sissi’s threat prompted Italy, Germany and the U.S. to push for a cease-fire over fears of an even wider war.

“All of our forces are working hard at preparations for the operation to liberate Sirte,” Mustafa al-Mujie, a spokesman for the Tripoli forces, said Tuesday. “We are sending reinforcements and expect the offensive to launch very soon.”

Tripoli forces have also vowed to capture Jufra, Haftar's air base in central Libya, where the U.S. military has accused Russia of sending at least 14 fighter jets.

Italy's foreign minister also made a lightning trip to Libya on Wednesday amid the flaring conflict between. Luigi Di Maio was due to meet the head of Tripoli's GNA Fayez Sarraj, as well as the interior minister and his foreign affairs counterpart, Italian agencies Agi and Ansa said.

Rome considers Libya "a priority ... our most important issue, which concerns our national security," according to an unnamed ministry source, cited by the Messaggero daily.

"We can't afford a partition of the country. That is why we went first to Ankara, a (diplomatic) channel we've always kept open," the source said, referring to Di Maio's trip to Turkey on June 19.

In recent months, Turkish-backed Tripoli forces have turned the war's momentum against Haftar, compelling his forces to retreat from most of the territory they seized since starting their campaign to capture the capital in April last year. Haftar and his foreign backers, including Egypt, Russia and the United Arab Emirates, have pushed for a return to the negotiating table to stem their losses and head off a larger conflagration.

The Arab League ministers expressed “grave concern” over a military escalation that “threatens the security of the entire region" and emphasized the need to “stop foreign interference, whatever its type or source.”

They appealed for an immediate return to U.N.-mediated cease-fire talks and for all foreign forces to be sent out of Libya – a daunting task in a country where thousands of mercenaries, mainly from Syria, have been deployed to both sides of the battlefield.

Earlier this month, Cairo also proposed a peace initiative calling for a cease-fire, the withdrawal of mercenaries and the disbanding of militias in the neighboring country.

The proposal was dismissed by the GNA and Ankara as a strategic move to gain time for Haftar as his forces have been retreating against the Libyan Army’s advance.

The Arab League, on the other hand, welcomed Egypt's proposal and urged Libyan factions to "positively engage" with such initiatives.

Shamakhi also voiced reservations on the call, saying the GNA was not invited to be part of Cairo's initiative. He added that "whoever wants to mediate... should not be siding with one party over the other."

Tunisia, Qatar and Somalia expressed reservations on the clauses criticized by the GNA.

As Qatar participated in the Arab ministerial meeting on the Libyan crisis in support of the GNA, State Minister for Foreign Affairs Sultan al-Muraikhi represented his country in the meeting.

"The State of Qatar stresses the need to respect the sovereignty of states and noninterference in their internal affairs," al-Muraikhi said.

He also stressed the need to seek serious collective work to make the political process in Libya successful "in a way that leads to a comprehensive settlement to enable Libya to achieve the desired stability and ensure its sovereignty and territorial integrity and the security and safety of its citizens."

The Qatari diplomat supported the Libyan government's call on implementing the Shkirat agreement through negotiations as well as national dialogue.

The Libyan government wants to return to the Skhirat agreement inked on Dec. 17, 2015, based on which Haftar's militias will have to withdraw from Sirte, Jufra and Fezzan.

"We are all sure that the continuation of the conflict in Libya is being paid for by the brotherly Libyan people and is draining the resources of their country, instead of using them to rebuild and achieve sustainable development," he said.