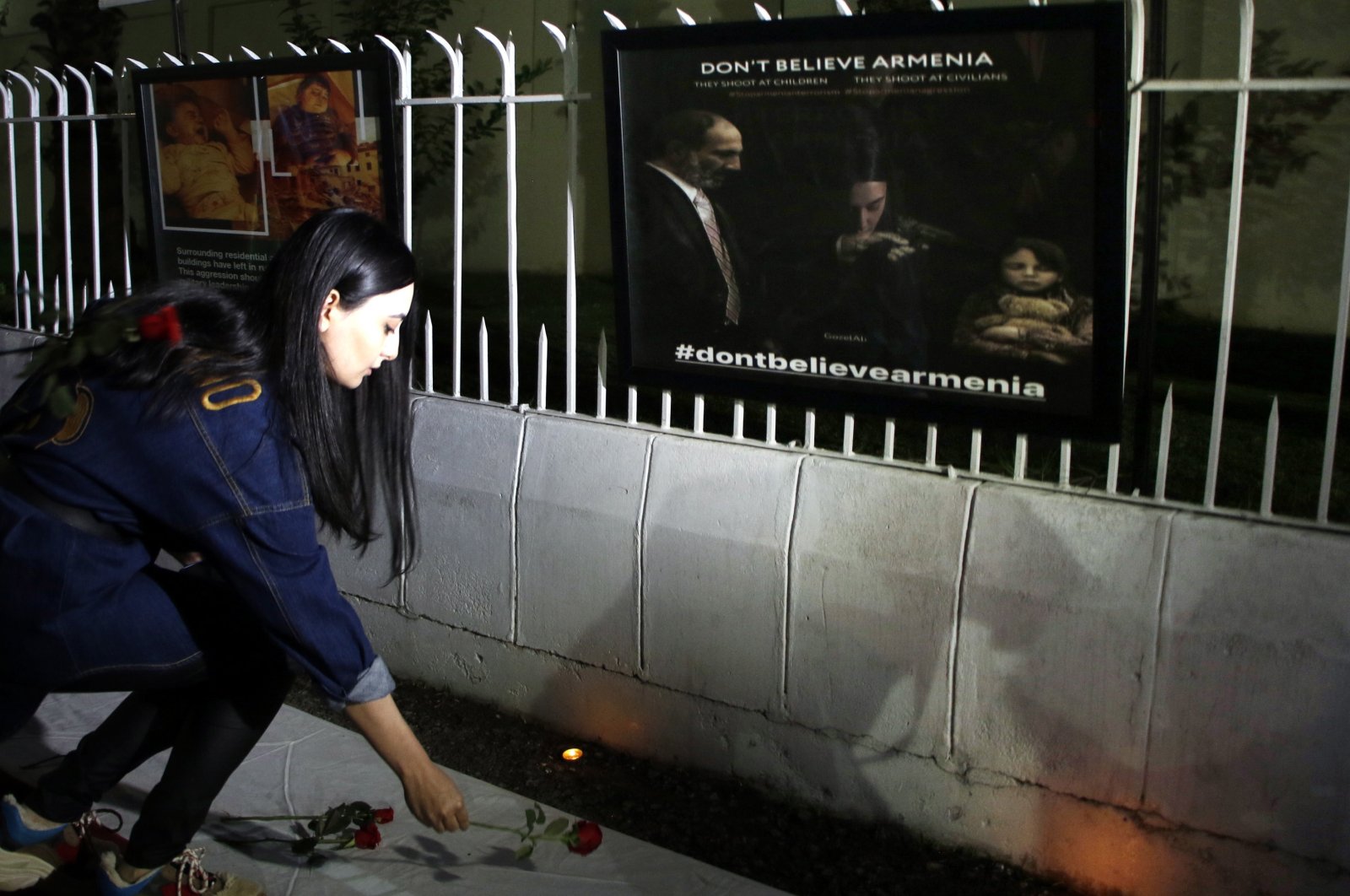 A person lays flowers as diplomats and staff of different foreign embassies gather outside the embassy of Azerbaijan during a memorial for the children killed by Armenian separatists, in Islamabad, Pakistan, Oct. 26, 2020. (EPA Photo)
by Anadolu Agency
Oct 26, 2020 8:13 pm

Though Azerbaijan agreed to a fresh humanitarian cease-fire to exchange prisoners and bodies, Armenian forces broke the truce only minutes after it was supposed to take effect, the Azerbaijani leader said Monday, marking the third such truce broken by Armenia in less than a month.

President Ilham Aliyev also stressed that those who are pressing for a humanitarian cease-fire are in fact sending weapons to Armenia.

"Why would anyone who wants a cease-fire send weapons?" he asked in an address to the nation.

On Armenia's supporters, Aliyev said, "If you want to save the Armenian state, tell them to leave our lands," referring to Nagorno-Karabakh which has been occupied by Armenia for nearly 30 years. "They will go out with a word of yours."

Armenia cannot stand without economic, financial and political support from other countries, he said.

He also underlined that since the current hostilities started on Sept. 27, the Azerbaijani Armed Forces, among others, have destroyed 252 Armenian tanks and seized another 53, as well as destroyed six S-300 anti-aircraft missile systems.

"Where do such expensive weapons come from in a country with such a bad economy? I'm asking, where's the money coming from for this?" he asked.

Aliyev said Armenia "bowed down" before Azerbaijan on the battlefield, adding that Yerevan planned to use the truce to "mobilize its forces and again take up arms."

"Unfortunately, huge amounts of various types of weapons have been sent to Armenia over the past month. We have all the lists," he said.

"Do not provide (them) weapons, and this issue will be over. On the one hand, they call for a cease-fire, on the other, weapons are being sent to them. What does this mean? We will not be silent on this."

Aliyev also announced the names of 17 villages liberated from Armenia's occupation a day earlier, along with the city of Gubadli.

He emphasized that the Nagorno-Karabakh area was an "eternal Azerbaijani land," adding that the Azerbaijani people have lived there for centuries, while the Armenians were later placed in that territory.

The Azerbaijani president accused the Armenian lobby of creating a "false perception" by spreading distorted information on the history of the region and the conflict. Meanwhile, thanks to the efforts of Azerbaijani diplomacy, objective reports have been provided to the world, he said.

Villages in the Aghdam region, as well as the city of Tartar and its surrounding villages, were subject to heavy shelling, Azerbaijan's Defense Ministry said in a statement.

It added that Armenian forces also opened fire on the Tovuz, Gadabay and Dashkesan regions of Azerbaijan from the Berd, Chambarak and Vardenis regions of Armenia.

A new U.S.-brokered temporary humanitarian truce between Azerbaijan and Armenia was announced Sunday and came into effect as of 8 a.m. local time (0400GMT) on Monday morning.

The first armistice, reached on Oct. 10, was violated within 24 hours as Armenian missile attacks on the Azerbaijani city of Ganja claimed civilian lives.

A second truce on Oct. 17 was again violated by Armenia.

Since the clashes erupted on Sept. 27, Armenia has repeatedly attacked Azerbaijani civilians and forces.

To date, at least 65 Azerbaijani civilians have died and 297 others injured, while 2,243 houses and 90 multi-apartment residential buildings were destroyed. Also, 402 civil facilities were damaged in Armenian attacks, according to Azerbaijani officials.

Commenting upon Turkish F-16 jets stationed in Azerbaijan, Aliyev said: "They always ask me: 'What are Turkish F-16s doing on your territory?' I'm tired of responding. Everyone knows that the F-16s are waiting on the ground."

He reiterated that the warplanes came to Azerbaijan for joint exercises in Turkish-Azerbaijani military drills.

The drills – which included air combat exercises involving jets and helicopters – began in Azerbaijan on July 29 and ended on Aug.10.

"Our Turkish brothers kept them here to give us moral support. If there's an attack from the outside against us, then they (attackers) will see those F-16s," Aliyev warned.

"No pressure can discourage us. No threat can turn us away."

Ankara said many times that it supports Baku's "just stance" to liberate the occupied territories from the Armenian forces.

Aliyev stressed that the co-chairs of the Organization for Security and Co-operation in Europe (OSCE) Minsk Group "monopolized the matter" of resolving the Nagorno-Karabakh conflict, adding that it did not benefit Azerbaijan in any way, but favored Armenia.

The OSCE Minsk Group – co-chaired by France, Russia, and the U.S. – was formed in 1992 to find a peaceful solution to the conflict, but to no avail.

"Did the Minsk Group put pressure on the invader? No. Did they want to put pressure? No. I told them many times that if you want to reach a solution, impose sanctions on Armenia. You're permanent members of the U.N. Security Council (UNSC). You can solve whatever issue you want."

He pointed out that the interests of the three countries "matched" on the Nagorno-Karabakh issue.

"The frozen situation pleases everyone except us. It pleases Armenia before anyone else."

Aliyev added that "a new reality was created" when the Azerbaijani army started to liberate its lands. "These three countries had all the means to show the attacker their place. But they didn't want to."

"Now, everyone should accept our reality. They are now working to save Armenia. They say 'let the negotiations begin.' The negotiation process has been going on for 28 years. We're tired of these negotiations now. We're implementing the UNSC decisions alone. But this was the duty of the UNSC," he asserted.

During his speech, Aliyev also expressed his agreement with Turkish President Recep Tayyip Erdoğan in his statement that "the world is bigger than five" – a long-standing criticism of the five permanent members of the UNSC and a call for reform of the international institution.

World powers, including Russia, France, and the U.S., have called for a lasting cease-fire. Turkey, meanwhile, has supported Baku's right to self-defense and demanded the withdrawal of Armenia's occupying forces.