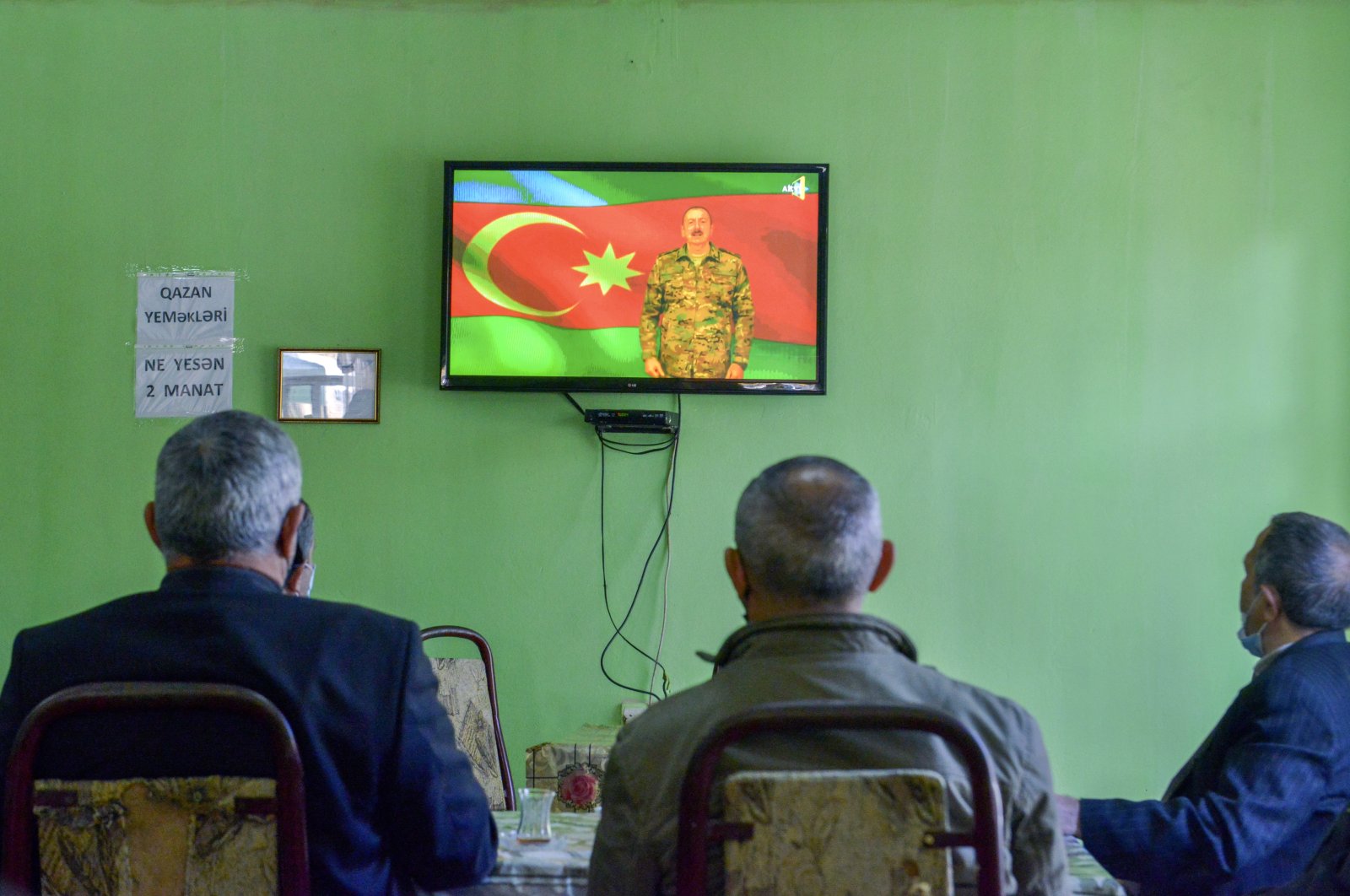 A ministry statement late Sunday said the Armenian army suffered "heavy losses" and fled their position on the front line.

"Heavy blows were inflicted on the enemy as a result of offensive operations carried out by the Azerbaijan army in the Khojavend region of the front. The damage was inflicted on enemy positions by shelling," it stated.

The ministry also shared footage of the clashes.

"During the day on Nov. 8 and the early morning of Nov. 9, several Armenian armed forces units fired at multiple Azerbaijani army positions and human settlements near the front using small arms, howitzers and mortars," it said in another tweet on Monday.

In another statement, President Ilham Aliyev on Monday announced that Azerbaijan had liberated 23 more villages from Armenian occupation.

Later in the day on Monday, Azerbaijan said it had liberated another town 48 villages and eight strategic heights from Armenian occupation.

Aliyev on Sunday announced the liberation of Shusha. It had been taken by Armenian forces on May 8, 1992, and is strategically important in liberating Nagorno-Karabakh. It is located on the road to Stepanakert (Khankendi), the region's largest city.

Conversely, Armenia said on Monday that the fight for Shusha continues.

"Intensive combat has been waged in the Shushi-Karintak sector," Armenian defense ministry spokesperson Shushan Stepanian said on Twitter, referring to a village at the base of cliffs on which the town sits. "The enemy has retreated, while friendly forces have occupied more favorable lines," she said.

As the Azerbaijani army's advance against Armenian forces continues in and around the Nagorno-Karabakh region, Azerbaijani soldiers on Sunday hoisted the country's flag in several towns surrounding the liberated city of Zangilan. Following official ceremonies, soldiers then started their outpost duties there.

Since fighting restarted on Sept. 27, at least 93 Azerbaijani civilians have been killed in Armenian attacks that target residential areas, leaving 407 others injured.

Some 3,064 houses and 100 multiunit residential buildings have been destroyed, while 504 civilian facilities have been damaged.

The defense ministry of the Armenian separatist forces said Monday that it had recorded another 44 casualties among its military, pushing its military death toll to 1,221 since fighting with Azerbaijan erupted in late September.

Over the past six weeks, the Azerbaijani army has liberated five cities, three towns, nearly 240 villages and some strategic heights from Armenian occupation.

About 20% of Azerbaijan's territory, including Nagorno-Karabakh and seven adjacent regions, has been under Armenian control for nearly three decades.

Azerbaijan on Monday also celebrated the 102nd anniversary of its national flag.

The tricolor design was adopted on Nov. 9, 1918, as the national flag of the Azerbaijan Democratic Republic (ADR) which existed for 23 months from 1918 to 1920.

Present-day Azerbaijan is considered the successor of the ADR, which claimed to be the first secular and democratic Muslim-majority country.

"The flag once raised will never fall!" became the motto of the country's independence struggle in the 20th century. They were the words of Mammad Amin Rasulzade, a statesman, prominent public figure and a founder of the ADR.

In 1991, when Azerbaijan regained its independence from the Soviet Union, the country's Supreme Council announced on Feb. 5 that the blue, red and green flag with an eight-pointed star and crescent would be the new republic's national flag.

On Nov. 17, 2009, President Aliyev signed a decree that declared Nov. 9 to be an official holiday known as National Flag Day.