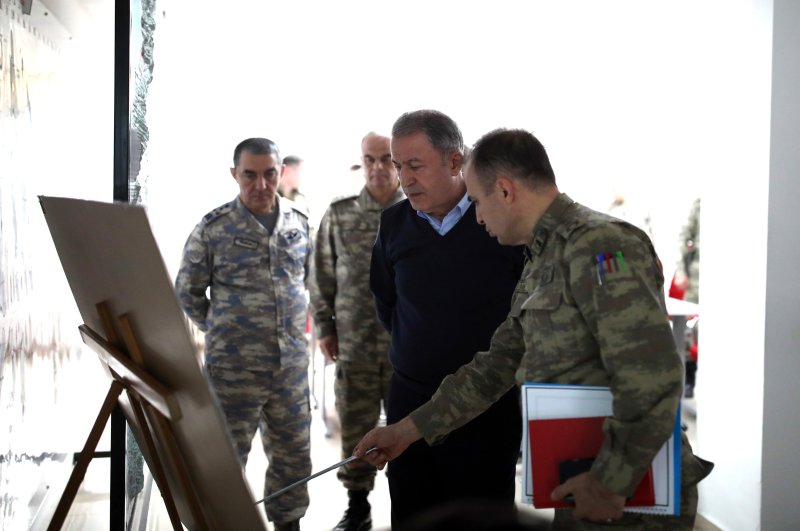 Defense Minister Hulusi Akar at the border with military personnel after the Assad regime's attack on Turkish soldiers, Feb. 27, 2020. (AA Photo)
by DAILY SABAH Feb 28, 2020 11:55 am
Edited By Sinan Öztürk

The attack was carried out despite the locations of Turkish troops having been previously coordinated with Russian authorities, Akar said, adding that no armed groups were near Turkish troops during the regime strike.

Moscow earlier said Turkish troops were "in the battle formations of terrorist groups."

Turkey early Friday carried out missile attacks on targets in Syria's central Hama, the northwestern towns of Nubl and Zahraa, and in the regime and Russian bastion Latakia in response to an Assad regime airstrike that killed 33 Turkish soldiers. With the attack, the growing alarm in Ankara over the recent escalation of tensions has reached a tipping point.

The minister stated that attacks on Turkish soldiers continued despite warnings after an initial strike, with even ambulances being hit.

Five helicopters, 23 tanks, 10 armored vehicles, 23 cannons and howitzers of various types, five ammunition trucks and unmanned aerial vehicles were hit by the Turkish army in response to the attacks.