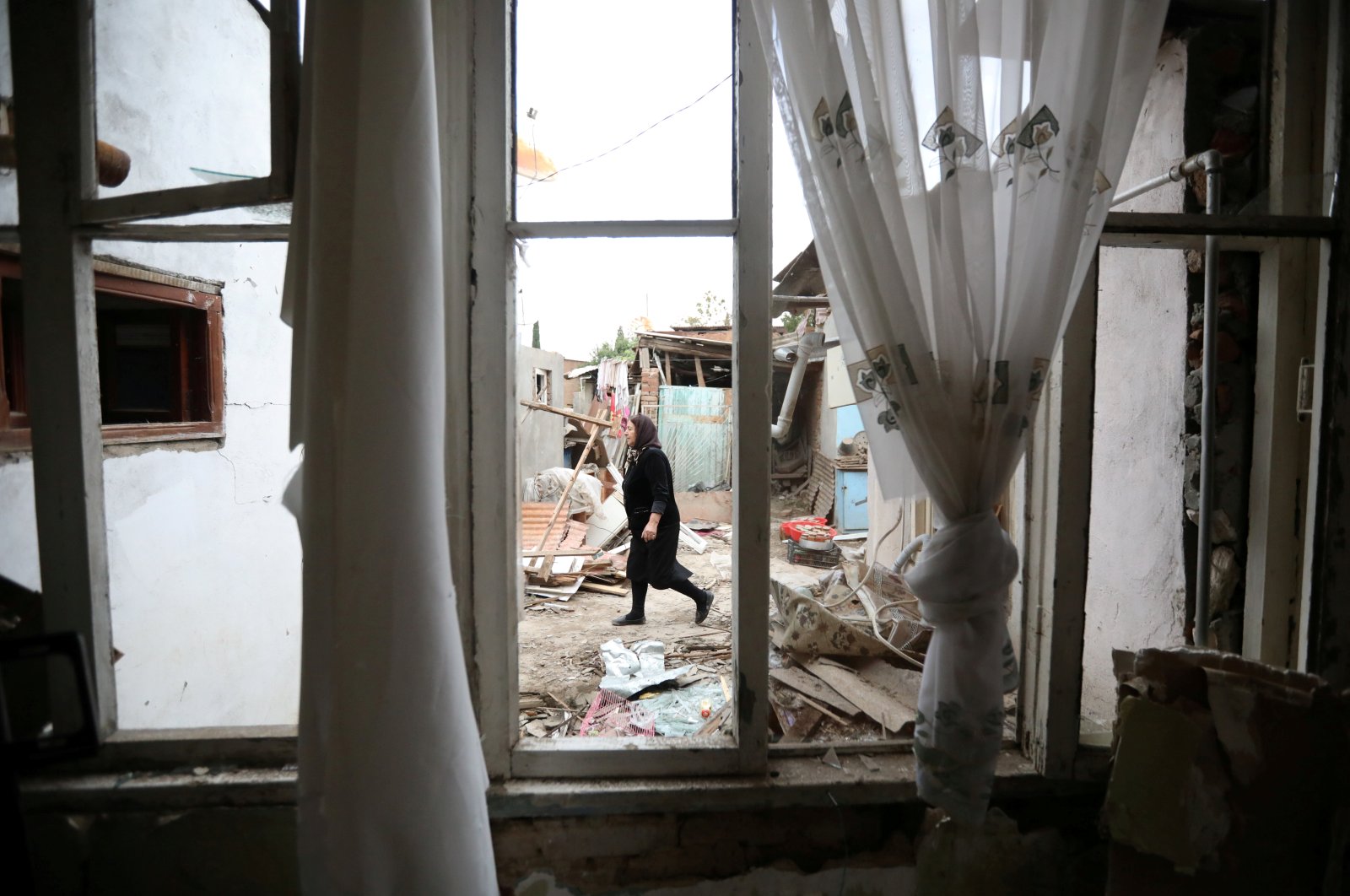 A woman walks past a house damaged by recent Armenian shelling during a military conflict over Nagorno-Karabakh, in the city of Ganja, Azerbaijan, Oct. 6, 2020. (Reuters Photo)
by ASSOCIATED PRESS Oct 10, 2020 9:05 am
RECOMMENDED

With Russia's mediation, Azerbaijan and Armenia agreed to a cease-fire in Nagorno-Karabakh that started at noon Saturday following two weeks of heavy fighting that marked the worst outbreak of hostilities in the Armenian-occupied region in a quarter-century.

The countries' foreign ministers said in a statement that the truce is intended to exchange prisoners and recover the dead, adding that specific details will be agreed on later.

The announcement followed 10 hours of talks in Moscow sponsored by Russian Foreign Minister Sergei Lavrov, who read the statement. It stipulated that the cease-fire should pave the way for talks on settling the conflict.

If the truce holds, it would mark a major diplomatic coup for Russia that has a security pact with Armenia but also cultivated warm ties with Azerbaijan.

The latest outburst of fighting between Azerbaijani and Armenian forces began Sept. 27 and left hundreds of people dead in the biggest escalation of the decades-old conflict over Nagorno-Karabakh since a separatist war there ended in 1994. The region belongs to Azerbaijan but has been under control of ethnic Armenian forces backed by Armenia.

The talks between the foreign ministers of Armenia and Azerbaijan were held on invitation from Russian President Vladimir Putin, who brokered the cease-fire in a series of calls with President Ilham Aliyev of Azerbaijan and Armenia's Prime Minister Nikol Pashinian.

Armenia said it was open to a cease-fire, while Azerbaijan previously had made a potential truce conditional on the Armenian forces’ withdrawal from Nagorno-Karabakh, arguing that the failure of international efforts to negotiate a political settlement left it no other choice but to resort to force.

Russia has co-sponsored peace talks on Nagorno-Karabakh together with the United States and France as co-chairs of the so-called Minsk Group, which is working under the auspices of the Organization for Security and Cooperation in Europe.

Speaking in an address to the nation Friday hours before the cease-fire deal was reached, the Azerbaijani president insisted on his country's right to reclaim its territory by force after nearly three decades of international talks that “haven’t yielded an inch of progress."

“Mediators and leaders of some international organizations have stated that there is no military solution to the conflict,” Aliyev said. “I have disagreed with the thesis, and I have been right. The conflict is now being settled by military means and political means will come next.”