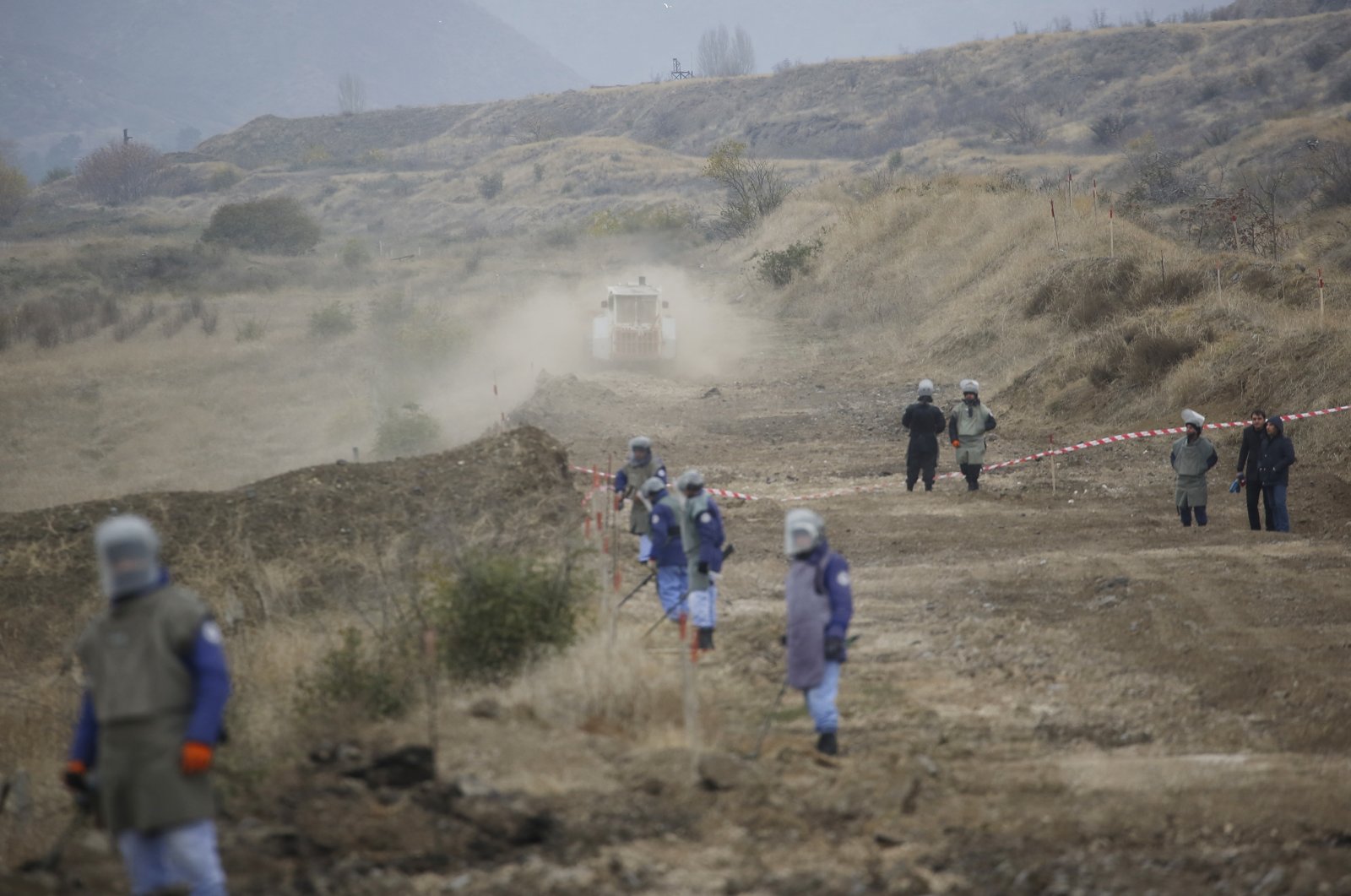 Azerbaijani experts conduct demining activities on the road between the towns of Tartar and Sugovushan, Azerbaijan, Nov. 29, 2020. (AA Photo)
by DAILY SABAH WITH AA Nov 30, 2020 10:24 am
RECOMMENDED

Since Sept. 27, at least 750 unexploded missiles and rockets, 4,500 anti-personnel mines and 2,000 anti-tank mines have been found and destroyed, according to Idris Ismayilov, who is heading the operation under the Azerbaijan National Agency for Mine Action (ANAMA).

Mine-clearing and destruction operations on the 10-kilometer (6.2 miles) road between the towns of Tartar and Sugovushan have continued for 10 days, he told reporters, adding that up to 8 kilometers have been completely cleared.

"We have neutralized 169 unexploded anti-tank and anti-personnel mines so far," he said, as quoted by the Anadolu Agency (AA), adding that the rest of the road will be cleared soon and then reopened to the public.

Demining is carried out manually, through demining machines and with the help of mine detection dogs, he added.

As many as 584 personnel, 30 mine detecting dogs and six machines are involved in the activities, according to ANAMA's website.

"It will take up to 10 years to completely demine the territory but people will be able to return to their ancestral lands in three to five years," he said.

On Saturday, four Azerbaijani civilians died after their car hit a land mine planted by retreating Armenian soldiers, in a newly liberated area of the region, Azerbaijan's prosecutor general said.

The explosion occurred when a vehicle carrying the civilians came in contact with the land mine in the village of Ashagi Seyidahmedli of Fuzuli province, a statement said.

"The mine was planted by the Armenian armed forces during their retreat," the statement said, adding that it was an anti-tank mine.

The statement called the incident a "new type of provocation" from Armenia.

Authorities have also asked the public not to enter the liberated areas without a special permit. The blast underlines the dangers Azerbaijanis face in trying to resettle in the territories.

Running along the border with Iran, Fuzuli was among the districts occupied by Armenian fighters in the 1990s war that saw separatists declare "independence" over the Nagorno-Karabakh region and several surrounding territories.

Azerbaijan recaptured Fuzuli in renewed clashes over Karabakh that started in late September and continued for six weeks.