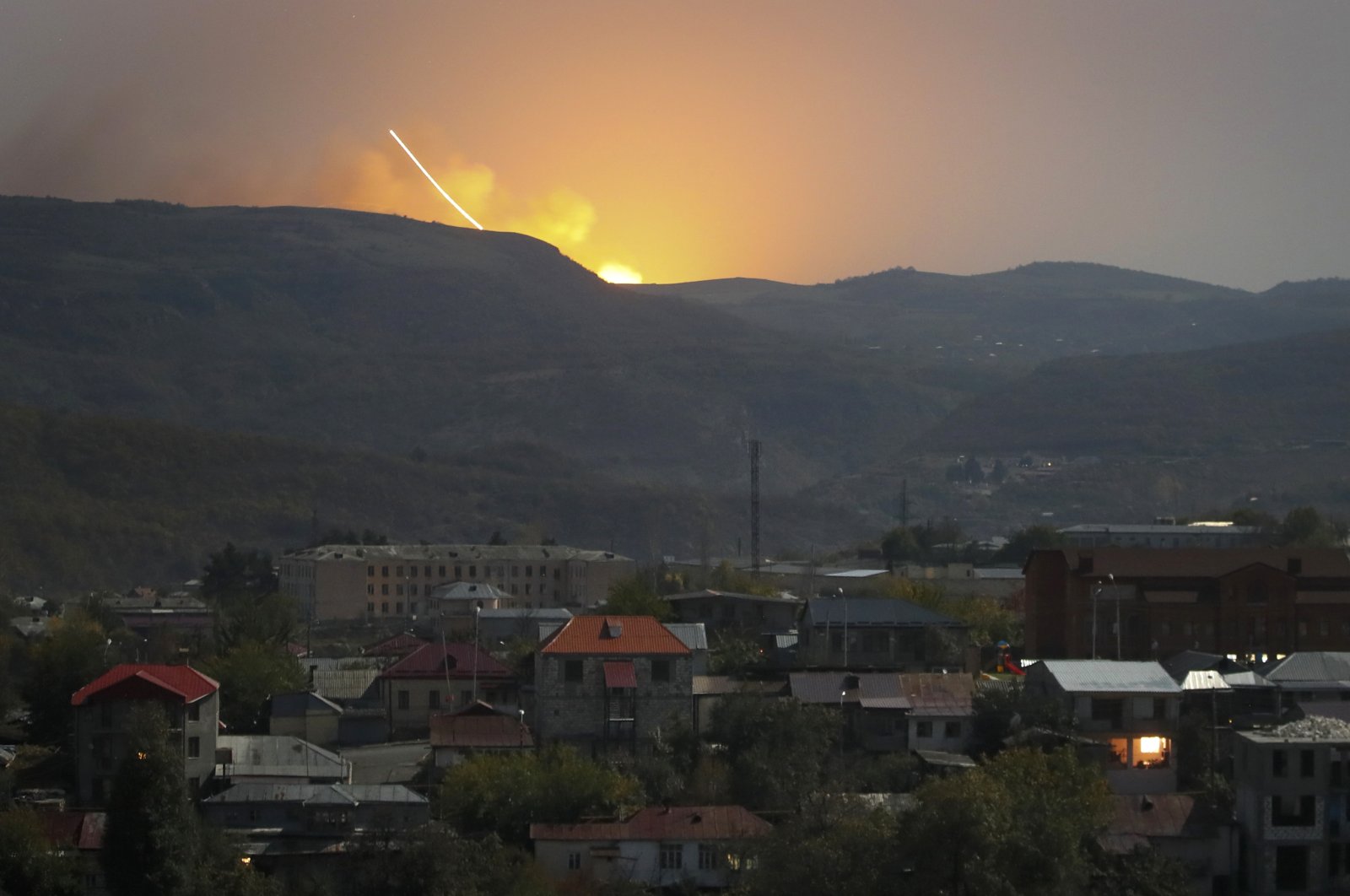 Explosions are seen behind the mountains during a military conflict outside Stepanakert (Khankendi) in the Armenian-occupied region of Nagorno-Karabakh, Oct. 30, 2020. (AP Photo)
by DAILY SABAH WITH AGENCIES Oct 30, 2020 11:06 am
RECOMMENDED

Azerbaijan announced Friday that it had countered night attacks by Armenia from various directions on the front while combat operations continued along the frontline, a month after clashes erupted between Armenia and Azerbaijan over the Armenian-occupied region of Nagorno-Karabakh.

In a statement, the Azerbaijani Ministry of Defense said the clashes took place mostly in the vicinity of Aghdara, Khojavand and Qubadli.

"The front is under the Azerbaijani army's control," it added.

In an earlier statement late Thursday, the ministry also said over the past 24 hours Armenian forces fired on the positions of units of the Azerbaijani army and civilian settlements with weapons, including artillery and missiles.

While the operations continued mainly in the Khojavend, Fuzuli and Qubadli directions of the front, attempts by the Armenian Armed Forces to attack were "resolutely prevented," said the statement, adding there were casualties among the Armenian troops due to Azerbaijan's retaliatory measures.

Armenian forces meanwhile subjected the territory of the Goranboy and Tartar regions of Azerbaijan to artillery fire in the morning hours, it said.

In another statement, the leader of Armenian separatist forces in Nagorno-Karabakh said Thursday that Azerbaijani forces were closing in on the historic town of Shusha, whose capture would mark a turning point after a month of fighting.

In a video recorded outside the town's famed cathedral, Arayik Harutyunyan warned that advancing enemy forces were "5 kilometers (3 miles) at the most" from the town.

"The enemy's main goal is to capture Shushi ... whoever controls Shushi controls Artsakh," he said, using the Armenian names for the town and Nagorno-Karabakh.

He called on Armenians to come to the defense of the strategically important town, the second-largest in Karabakh after the main city Stepanakert (Khankendi).

"In the next few days, we need to reverse this situation at the front and punish the enemy right at the gates of Shushi. Let's unite and fight together," he said.

Gaining control of Shusha would be a major victory for Azerbaijani forces, who have been making gains against Armenian forces since new fighting erupted over Nagorno-Karabakh a month ago.

The town is located on strategic heights over Stepanakert and on the road linking the city with Armenian territory.

To date, at least 90 civilians have lost their lives, including 11 children and infants, and 392 people – including at least 36 children – have been injured in attacks by Armenian forces. Some 2,406 homes and 92 multi-apartment residential buildings have been destroyed, and 423 civilian facilities have been damaged.

More than 1,200 people from both sides have been reported dead since the fighting began, including over 130 civilians, and thousands have been forced from their homes.

Azerbaijan has not released any figures on its military casualties, and the death toll is believed to be higher, with Russian President Vladimir Putin saying last week that close to 5,000 people had been killed.

Diplomatic efforts have continued, though planned talks involving the two countries' foreign ministers in Geneva on Thursday were postponed for at least a day.

Azerbaijan has claimed to be making significant gains since the fighting began by retaking areas it lost in the 1990s war, in particular in a buffer zone outside Karabakh seized by Armenians. Armenia has admitted to suffering losses and called on volunteers to join the fighting.

Azerbaijan said on Thursday it had handed to Armenia the bodies of 30 troops killed in the fighting.

"Armenia has failed to show goodwill in that matter," but thanks to Russian mediation has "agreed to open a humanitarian corridor" for the evacuation of Azerbaijani soldiers' bodies from battlefields, Azerbaijani President Aliyev's aide Hikmet Hajiyev told journalists.

Armenian Defense Ministry spokesperson Shushan Stepanyan confirmed the handover mediated by Russia and the Red Cross and added that the Armenian side was ready to return the bodies of slain Azerbaijani soldiers.

Aliyev also signed a document Thursday to establish temporary special administrations in regions liberated from the occupation of Armenia in Nagorno-Karabakh.

A temporary special administration organization will be established for each region and the Interior Ministry will appoint directors, according to the decision.

Organizations will carry out activities in coordination with the Defense Ministry and State Border Service. They will be responsible for the security of transportation and telecommunications infrastructure facilities, energy and water supply systems, water tanks and key facilities, including private facilities that pose a high danger to the environment.

They will also be in charge of collection, inventory and protection of detected military equipment, weapons, ammunition, poisonous and explosive materials and the protection of public order and security.

Together with relevant institutions, the organizations will conduct activities such as demining land, preventing acts such as terrorism, espionage and sabotage, and taking inventory of land and real estate, cultural assets, mines and natural resources.

Aliyev announced that more than 130 villages, four cities and several settlements, as well as strategic locations, have been liberated from Armenia's occupation.

The Minsk Group, which was set up in 1992 by the Organization for Security and Co-operation in Europe (OSCE) and co-chaired by France, Russia and the U.S. – was formed in 1992 to find a peaceful solution to the conflict, but to no avail. A cease-fire, however, was agreed to in 1994.

World powers including Russia, France and the U.S. have called for a sustainable cease-fire. Turkey, meanwhile, has supported Baku's right to self-defense and demanded the withdrawal of Armenia's occupying forces.

Meanwhile, a report released by the Stockholm International Peace Research Institute (SIPRI) revealed that Russia has supplied 94% of the military equipment Armenia has obtained over the past five years.

Russia delivered some of the equipment without demanding payment or as loans, the Stockholm International Peace Research Institute's (SIPRI) research showed.

Moscow sometimes issues credits to Armenia, which has a deteriorating economy.

In 2015, the two countries signed a treaty in which Russia agreed to issue a $200 million loan for military equipment delivered in 2018.

Russia has assumed the "neutral mediator" role while providing military equipment to occupying forces in the conflict as it co-chairs the Minsk Group.

Azerbaijan's president voiced suspicions about Russia, asking: "Why would someone who wants a cease-fire send weapons?"

Additionally, evidence indicates shipments of equipment to Nagorno-Karabakh from a Russian military base in Armenia.