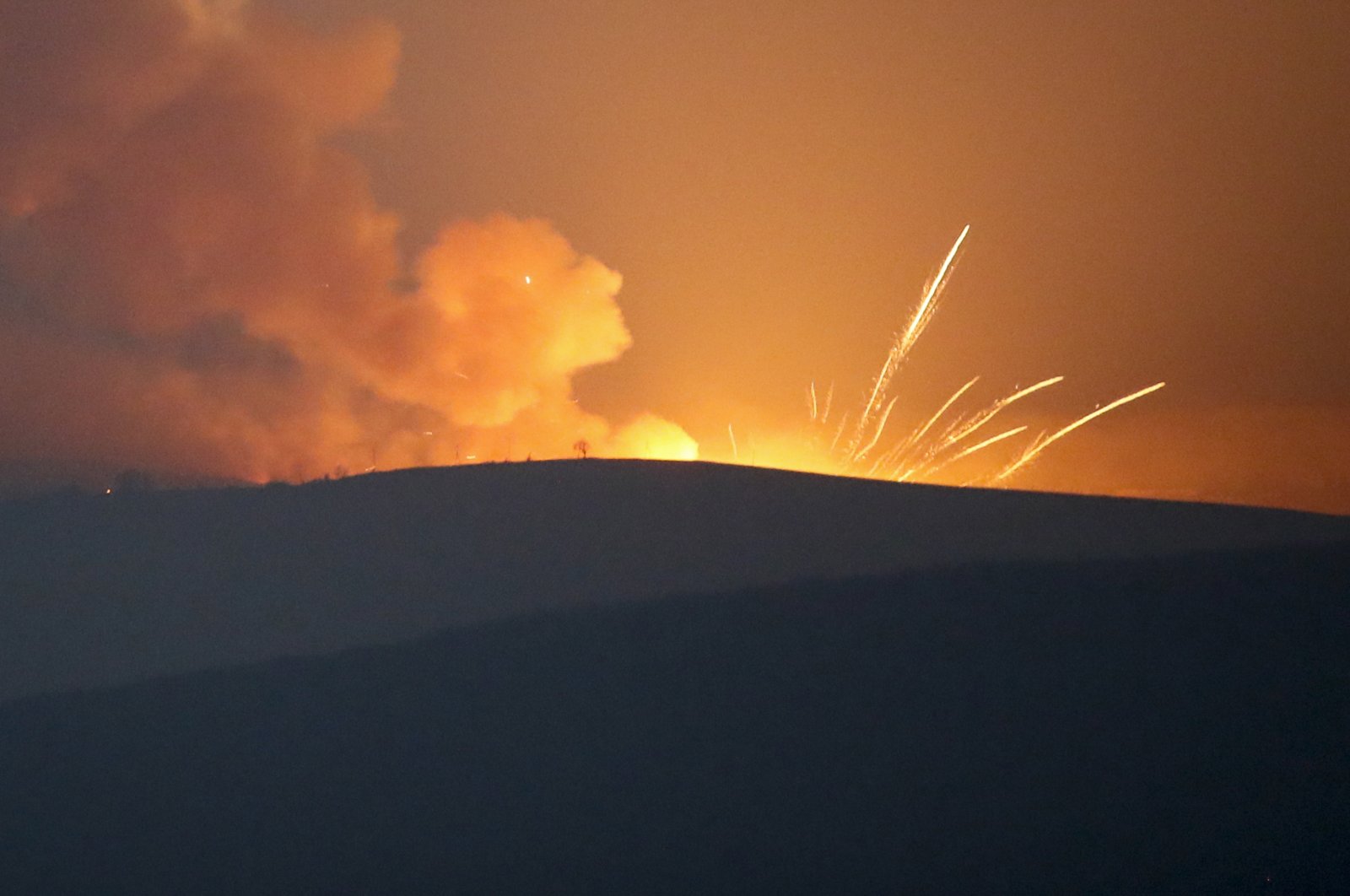 Explosions are seen in the mountains during fighting between Armenian and Azerbaijani forces outside Stepanakert in the occupied region of Nagorno-Karabakh, Azerbaijan, Nov. 1, 2020. (AP Photo)
by DAILY SABAH WITH AA Nov 02, 2020 8:19 am
RECOMMENDED

Azerbaijan's army on Sunday destroyed an Armenian military convoy during operations to liberate its occupied territories.

The Azerbaijani Defense Ministry said the convoy was detected as it was moving toward the town of Khojavend.

Azerbaijan hit the Armenian forces both with airstrikes and artillery, destroying some of the vehicles and neutralizing the military personnel, the ministry added.

The Azerbaijani Defense Ministry on Monday also stated that Armenia's armed forces at the front fired in different directions including toward the positions of its army units and toward civilian human settlements using a variety of weapons, including artillery and missiles.

"Defending enemy units were forced to retreat while losing personnel and military vehicles at the front. The enemy's weapons, ammunition and food supplies are running out. There is a lack of spare parts for trucks and other military vehicles" it added in a tweet, followed by, "During the day, a large number of enemy forces including 4 BM-21 Grad MLRS, 10 different types of howitzers, 3 trucks loaded with ammunition and 5 other vehicles were destroyed or wrecked along the front."

It also stated that starting from 6 a.m. on Nov. 2, Armenian armed forces began shelling the Aghdam village and the Aghjabedi region.

Later in the day, Azerbaijan's President Ilham Aliyev announced that the Azerbaijani army has liberated eight more villages from the Armenian occupation.

Since clashes erupted Sept. 27, Armenia has repeatedly attacked Azerbaijan's civilians and its armed forces, violating three humanitarian cease-fires since Oct. 10 in the process.

To date, at least 91 innocent people, including 11 children and 27 women, have been killed by Armenian attacks, according to Azerbaijan's Chief Prosecutor's Office.

About 400 civilians, including at least 14 infants, 36 children and 101 women, have also been injured in the violence.

At least 2,442 homes, 92 apartment buildings and 428 public buildings have been damaged and become unusable, the authority also said.

Yerevan and Baku once again accused each other of bombing residential areas on Saturday, in defiance of a pact to avoid the deliberate targeting of civilians in and around occupied Nagorno-Karabakh.

Shelling was reported by both sides within hours of the latest agreement to defuse the conflict was reached. A meeting in Geneva included the two countries' foreign ministers and envoys from France, Russia and the United States, which are the co-chairs of the Organization for Security and Co-operation in Europe's (OSCE) Minsk Group, which was formed in 1992 to find a peaceful solution to the conflict but to no avail.

Baku and Yerevan's top diplomats agreed on Friday not to target civilian populations or non-military objects, according to a statement from the Minsk Group after it had mediated hours of discussions.