Child refugees struggle to survive in Balkans, Europe fails to come up with solid stance 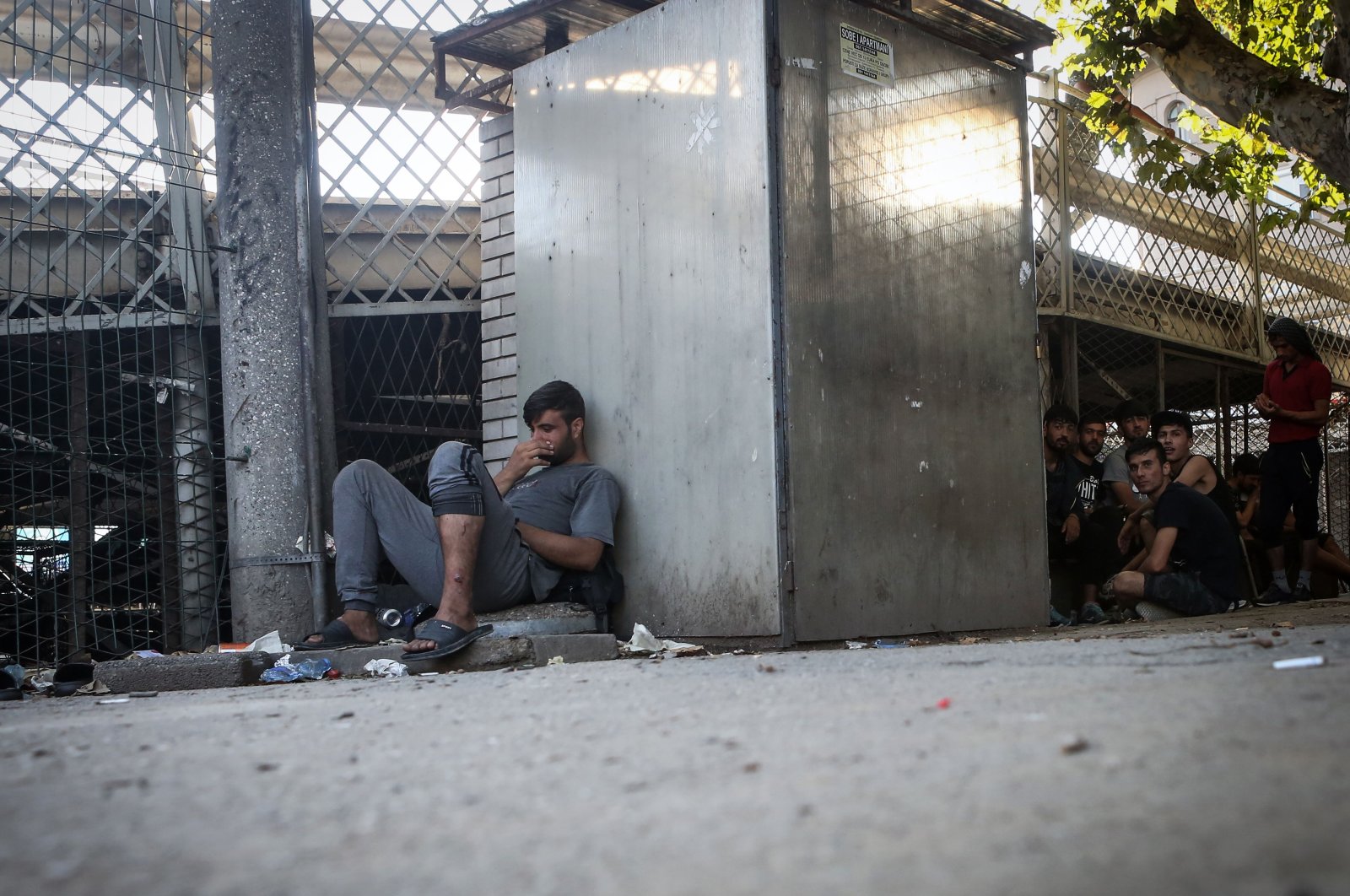 A group of boys sits on a sunny patch of grass in a park in downtown Belgrade, but they are not here for a picnic.

They are "unaccompanied minors" – the official name for the most vulnerable category of migrants who travel thousands of miles without adult supervision, and they have come to meet a smuggler to ferry them across the next border.

Although the so-called Balkan route was officially closed in the wake of Europe's migrant crisis five years ago, the region is seeing a fresh tide of travelers, even amid the coronavirus pandemic.

Europe's failure in coming up with a concrete stance toward caring for child refugees continues to end in the suffering of the minors, with many in the Balkans stuck in dire conditions.

The issue of unaccompanied children in Europe has especially become controversial as thousands of children seek asylum for a better and safer life. However, along the way, they may end up experiencing sexual exploitation, forced marriages and slavery or get caught in criminal networks of forced begging, drug trafficking and pickpocketing.

According to the European Commission, there are more than 50 million child migrants worldwide, 28 million who have been fleeing from violence. This number shows that one in every 200 children is a refugee.

Some 5.4 million of these children are in Europe, constituting about 7% of the overall migrant population in the continent. Back in 2015, the commission says, 31% of the refugees who arrived in the European Union by sea were children.

Some 30,000 refugees and migrants were registered in Serbia in the first half of 2020, almost three times the number for the same period last year, according to official data.

Among them, 1,200 are minors traveling alone, the youngest at just 7 years old.

In the Belgrade park, a green-eyed 14-year-old from Afghanistan describes leaving home in February after the Taliban took his father, two older brothers and two uncles to the mountains and killed them.

"My mother decided that I had to go," Ahmed, whose name was changed for this story, told Agence France-Presse (AFP).

Since then, he has traveled more than 4,000 kilometers (2,500 miles) across five borders, mostly on foot.

"When we crossed from Afghanistan to Iran, we took the mountain route. It was snowing, and 12 people from our group froze to death," the child recalled, with a trembling voice.

Youngsters like Ahmed face myriad dangers on the migrant trail, which involves linking up with smugglers, evading border police and finding places to sleep in foreign cities.

Almost a third of unaccompanied children passing through Serbia have experienced violence, either physical, psychological or sexual, according to data from Doctors Without Borders (MSF).

The majority of the children Toskic worked with had developed issues like anxiety, depression, substance abuse and behavioral problems such as self-harm.

"The percentage of those who developed PTSD is larger than the ones that didn't," she said.

Official refugee camps can be dangerous too.

After Serbia went into lockdown to battle the coronavirus earlier this year, it sealed migrant centers shut.

In June, a video emerged showing security guards slapping and beating minors with batons in Bogovadja camp, a site that has only one social worker for 330 children.

In March, six adult migrants were arrested in a center in Bosnia-Herzegovina on suspicion of raping several teenagers in the camp.

Linking the Middle East to Europe, the Balkans became a thoroughfare for migrants in 2015 when hundreds of thousands flowed through the region in hopes of reaching Western Europe.

The route was shuttered under a 2016 agreement between the European Union and Turkey, which agreed to house the refugees in return for 6 billion euros ($7.1 billion) in aid.

But traffickers continue to carve paths through the peninsula, crossing seas, rivers and mountains and often packing up to 20 migrants in a single vehicle.

Back in July, the Parliamentary Assembly of the Council of Europe (PACE) released a report, saying that there is no cohesive approach to address the issue of missing migrant children in Europe.

The inquiry analyzed the number of missing migrant and refugee children in the bloc, how they are registered and who is responsible for informing police when they go missing.

Thirty-two out of 37 parliaments or countries replied, which showed that there is no cohesive policy to address the matter, and each country has different criteria and practices, which makes it difficult to summarize the matter statistically.

As a hub for smugglers, Belgrade remains a major intersection from which trails branch out toward neighboring Croatia, Bosnia-Herzegovina and Hungary.

"They can only pay a small amount of the needed money to the traffickers," effectively leaving the youngsters "in a form of slavery."

All of the children AFP spoke to also described violent police pushbacks and forced expulsions without the chance to apply for asylum at borders, which Balkan countries deny or treat as one-off "incidents."

Most of the pushbacks have been carried out by Hungarian and Croatian police, according to testimonies gathered by the Border Violence Monitoring Network, a regional NGO.

In 2020 alone, there have already been 40 reported assaults on groups that had minors among them, including a 5-month-old baby, the NGO reports.

The problem in the Balkan countries toward refugee children is not unique to there, as all of Europe has been suffering from similar issues, the PACE report shows.

For instance, the report noted that in 2019 alone, there were some 393 children missing in Austria, while 1,021 went missing in Belgium in 2018. While some countries gave the stats for a single year, and others gave figures ranging from 2015 to 2019.

While in some countries such as Austria, Croatia, Georgia, Germany, Iceland, Italy, Spain and the U.K. there is no legal obligation to notify authorities when migrant children go missing, in countries like Bulgaria, Estonia, North Macedonia, Finland and Turkey, there is such an obligation.

Even the “authorities” that migrant children’s carers should notify vary from country to country, as in some countries like Germany, Belgium, Croatia and Latvia police are described as the official body, while in countries like Portugal, the Netherlands and Slovakia, relevant authorities include the police and other governmental bodies responsible for taking care of migrants.

The European Commission has proposed 10 principles for integrated child protection systems, which provide a framework for the protection of children in migration back in 2017.

These principles claim to "prioritize actions aimed at strengthening child protection systems along the migratory routes." They include supporting "partner countries in developing strong national child protection systems," applying "child-friendly and gender-sensitive approaches when collecting fingerprints and biometric data," ensuring that "a person responsible for child protection is present at an early stage of the identification and registration phase" and putting "in place the necessary procedures and protocols to systematically report and respond to all instances of unaccompanied children going missing."

Still, these principles seem to be inefficient, as minors' suffering in the continent continues.

Karox Pishtewan, a Kurdish refugee who came to Serbia three years ago as a "scared to death" 16-year-old, has taken a different route from most.

After years in a Serbian orphanage, he decided to stay and was one of the few to secure refugee status here.

Today the 19-year-old sports a trimmed beard and has an apartment of his own in Belgrade, plus a job as a translator for a human rights NGO.

"Here I don't have too much, but I have a life," he said in Serbian, adding that he often tries to persuade other youngsters from continuing onward.

When Pishtewan first entered Serbia, the Balkan country was receiving praise for its more humanitarian reception of migrants compared with neighbors who erected border fences and pushed xenophobic rhetoric.

But migrants have increasingly become a target of far-right groups, who accuse the government of a "secret plan" to settle hundreds of thousands in Serbia, a claim denied by the government.

Most children think only of getting to their desired destination.

"I know this is not something a 14-year-old is supposed to experience," said Ahmed, who said he wanted to reach France.

"But I didn't have a choice. There is death on the route, but death is also at home; it makes no difference."