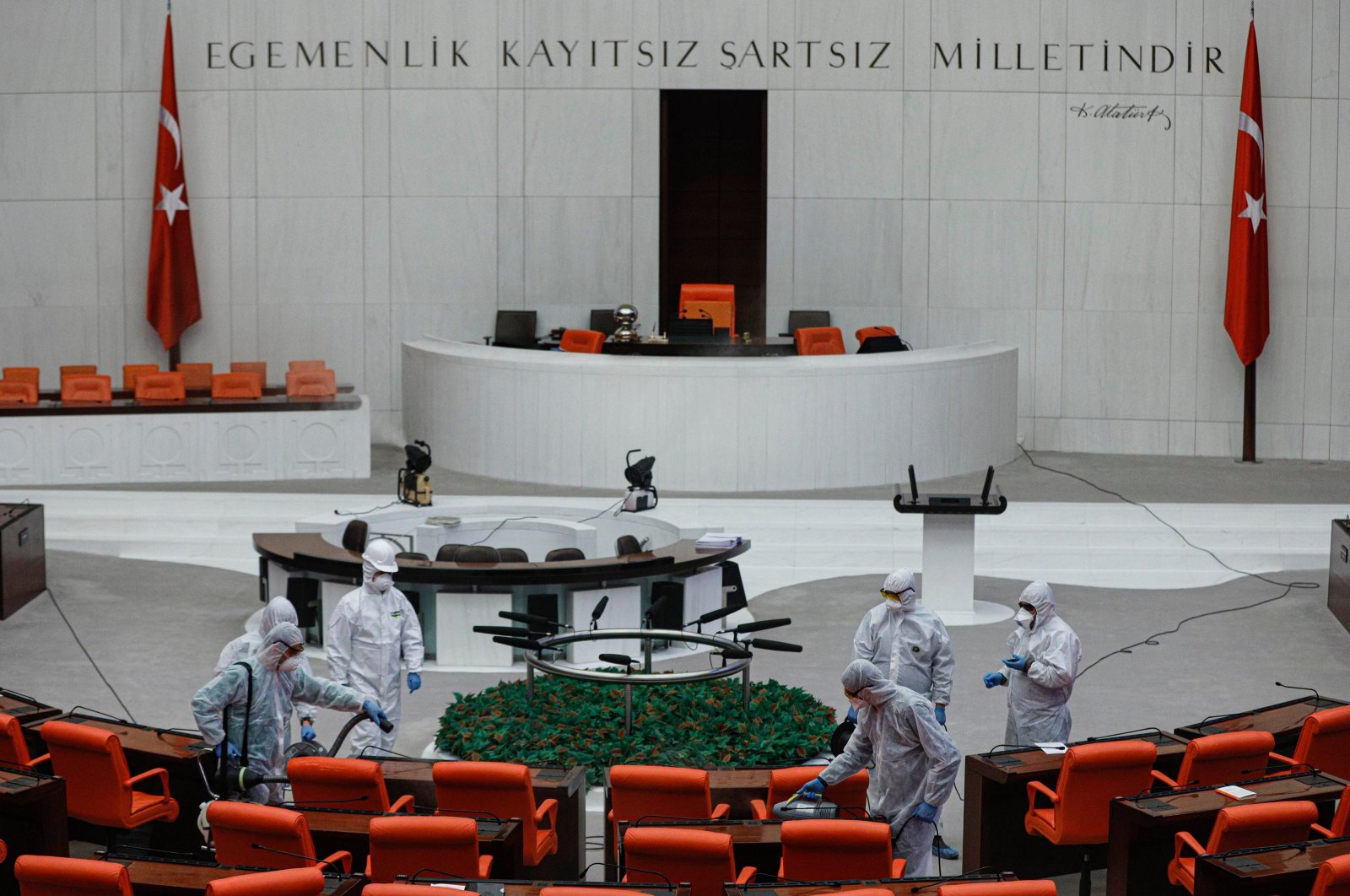 The ongoing coronavirus pandemic has taken its toll on many aspects of life in Turkey, including politics, sparing no party

As the coronavirus pandemic races on at full speed across the globe, Turkey has ramped up precautions in every aspect of life and in public places, including in politics and the Turkish Parliament. Turkey has seen a rise in cases in recent weeks, and authorities are urging citizens to abide by the rules of hygiene, mask-wearing and social distancing.

Despite these measures, nearly all prominent Turkish political parties have reported infections and many prominent political figures have contracted the virus.

In a recent statement, Parliament Speaker Mustafa Şentop said that the assembly has had 44 coronavirus cases so far.

“We have five deputies in self-isolation and four in hospitals,” he said.

On Tuesday, it was announced that a staff member working in the human resources department of the Turkish Parliament died due to COVID-19, only days after diagnosis. The 34-year-old's death marked the first COVID-19-related death in Parliament.

Because of the spread of the coronavirus, Parliament has been working under new norms including enhanced hygiene measures, the use of masks and social distancing.

When the outbreak first began in Turkey in early March, Parliament barred visitors from entering the building as a precaution against infection. Parliament does not accept any visitors for the weekly parliamentary group meetings, either.

Deputies were previously warned not to bring the elderly or children to group meetings, to avoid group photos at the end of the meetings and not to invite outside visitors to the restaurant in the Parliament building.

Consequently, the building has received far fewer visitors than usual, with multiple international commissions and meetings of foreign delegations canceled until further notice. The presidency of the assembly has also demanded all deputies cancel upcoming trips abroad.

Disinfectant dispensers have also been placed at 284 spots within the Parliament building, in addition to warning signs prepared by the Health Ministry, stating the importance of hand-washing. Almost all the meeting halls of the building have been disinfected.

The ruling Justice and Development Party (AK Party) has seen several of its deputies infected with the virus.

The AK Party has made public that five of its deputies have tested positive for COVID-19 so far.

"The necessary medical process has been initiated today after I tested positive in a routine coronavirus test," Muhammet Emin Akbaşoğlu, AK Party deputy parliamentary group chairman, said on Twitter in early July. He added that his general health was fine.

AK Party deputy Vedat Demiröz was also infected with the virus and discharged from the hospital in late July.

Two other AK Party deputies also announced in July that they had tested positive for COVID-19.

Ahmet Salih Dal, who is from the southern province of Kilis, said in a statement on social media that he had been taking necessary measures to keep his distance from others by self-quarantining since he tested positive. He also assured that his health condition was improving.

In a written statement, Hüseyin Şanverdi, an AK Party deputy from southern Hatay province, said he was receiving care in the state hospital for COVID-19. "Thank God, I do not feel the severe symptoms of the virus that will negatively affect my health," Şanverdi said.

The latest AK Party official to test positive was Izmir deputy and former Prime Minister Binali Yıldırım, who announced that he and his wife Semiha Yıldırım tested positive for COVID-19 last Thursday.

In a statement to Daily Sabah, Binali Yıldırım's aide Sinan Çetin said the former prime minister's health condition is good and he has no complications.

"We went to the Ankara City Hospital today due to fatigue," Yıldırım said in a tweet. "As a result, we both tested positive."

"Our condition is fine, there is no negative effect. Our physicians decided that we had better stay at home in quarantine," Yıldırım said. "We call upon our citizens to abide by the rules of social distancing, mask-wearing and hygiene."

"We are praying, and we also expect prayers," he added.

The Nationalist Movement Party (MHP) has also been touched by the pandemic, as one deputy and an aide to the party's deputy chairman Feti Yıldız tested positive for COVID-19.

After the aide tested positive for the virus in early April, Yıldız was hospitalized and put in self-isolation as a precaution. A statement from the MHP said that Yıldız later tested negative for the virus.

MHP’s Kayseri deputy Baki Ersoy tested positive for COVID-19 in early August upon arrival at Ercan International Airport in the capital of the Turkish Republic of Northern Cyprus (TRNC), Lefkoşa (Nicosia in Greek).

Turkish Cypriot news outlets reported that Ersoy consulted the Turkish embassy in Lefkoşa and requested an ambulance plane to return to Turkey for treatment. He returned to Turkey by ambulance plane and has since recovered.

The main opposition Republican People’s Party (CHP) has also seen cases among its deputies and personnel.

On Sunday, the deputy chair of the party said he had tested positive for COVID-19. Releasing a statement on Twitter, CHP Deputy Chair Onursal Adıgüzel said he was receiving treatment in the hospital but that his condition is good.

Adıgüzel added that he would self-isolate himself for a while and warned others to follow hygiene and social distancing measures.

CHP Trabzon deputy Ahmet Kaya and Osmaniye deputy Baha Ünlü both tested positive for the virus in August and placed themselves in self-isolation at home.

Ankara Mayor Mansur Yavaş of the CHP said Tuesday that many personnel in the Metropolitan Municipality have tested positive for the virus so far.

“The guard who greeted me this morning tested positive for COVID-19 just an hour later,” he said.

Chairwoman of the opposition Good Party (IP) Meral Akşener was also previously suspected of having contracted the virus.

Akşener placed herself in self-isolation in July after one of her guards tested positive for COVID-19. She had no symptoms and later tested negative for the virus.

Meanwhile, IP’s provincial organization in the central Anatolian province of Konya has faced several cases and one death.

Deputy chairman of the Meram district organization of IP, Ismail Ethem Taboru, lost the battle for his life after testing positive for the virus in early August. IP’s Meram district organization head Mehmet Avcı, his wife and his mother-in-law all tested positive and have since recovered. Deputy chairman of IP’s Konya provincial organization, Nevzat Kale, and his spouse Şeref Gül Kale also tested positive for the virus.

In June, the pro-PKK Peoples’ Democratic Party (HDP) announced that three deputies were infected with the coronavirus.

"It was discerned after initial tests that three of our lawmakers had been infected. The lawmakers are under the doctor's supervision and are improving," the party stated.

The names of the infected HDP lawmakers were later disclosed as Mensur Işık, Pero Dündar and Nuran Imir. Işık recently came into the spotlight for alleged domestic violence against his wife and now faces dismissal from the party.

The mayor of eastern Tunceli province, Communist Party of Turkey's (TKP) Mehmet Fatih Maçoğlu, also previously tested positive for the virus and was discharged from the hospital in late June.

Most recently, the chairman of the newly founded Democracy and Progress Party (DEVA) Ali Babacan tested positive for the virus at the end of August, along with members of his family.