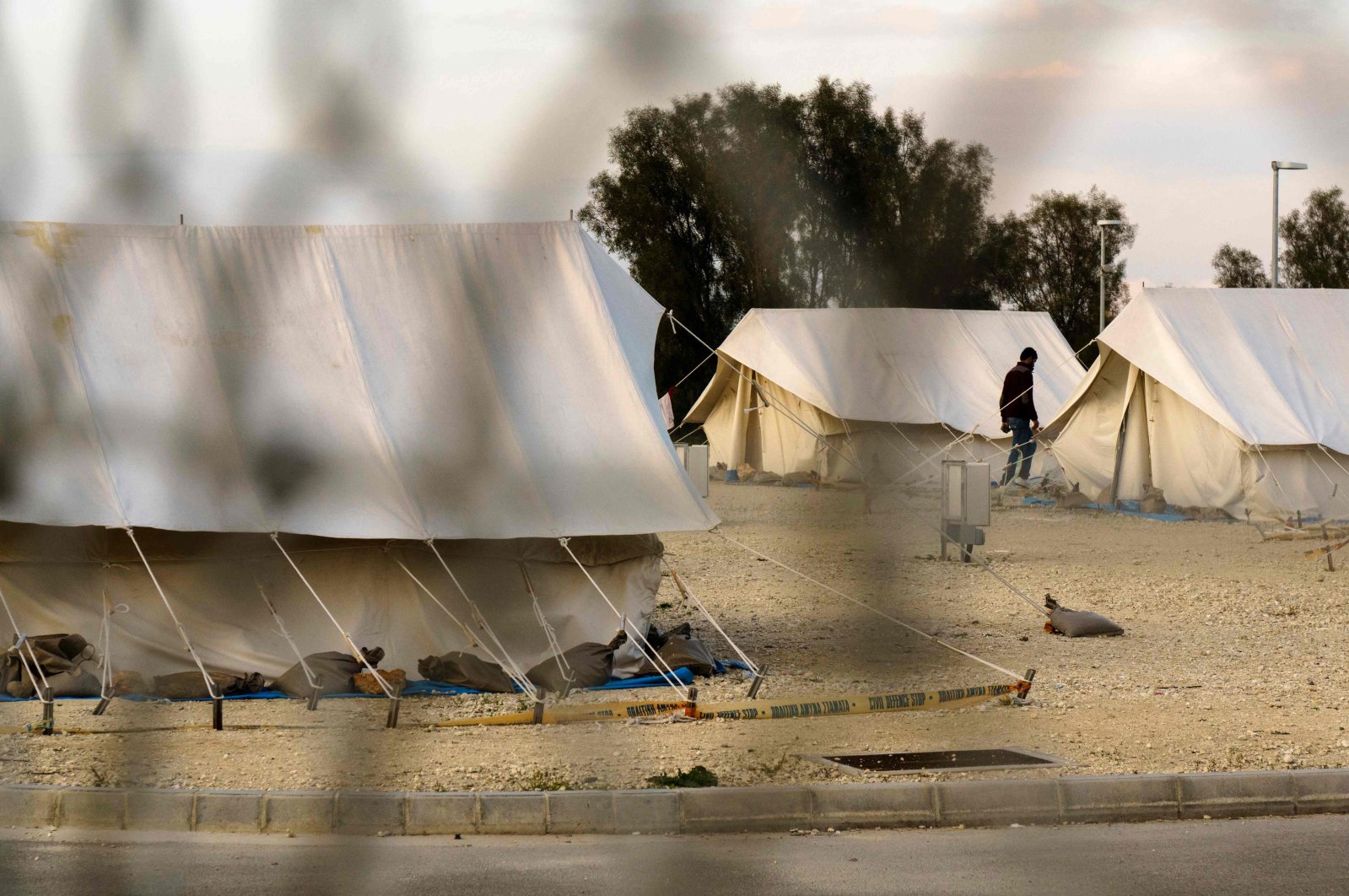 A Syrian refugee walks between tents at a reception center in Kokkinotrimithia on the outskirts Nicosia, Greek Cyprus, March 7, 2017. (AFP Photo)
by daily sabah with afp Jun 03, 2020 11:33 am
Edited By Nurbanu Tanrıkulu Kızıl
RECOMMENDED

In the thick of the coronavirus lockdown in the Greek Cypriot-administered part of Cyprus, authorities gave a group of asylum-seekers a stark choice: Move to an overcrowded camp or go home.

The Mediterranean island deemed it a necessary step to save money as they now have Europe's highest per capita rate of asylum applications.

For the migrants, it was tough, said one Nigerian, who now lives in a cluster of U.N. tents and prefabricated huts surrounded by razor wire, a facility built for 200 people that now houses some 800.

He was one of the dozens of asylum-seekers who had initially been housed at hotel apartments in the coastal resort of Ayia Napa, which was otherwise deserted because of the pandemic.

One day, he says, they were told: "Either you get on the bus or you sign a paper saying that you want to go back to your country."

"It was so fast, nobody had time to decide," he said. "Everything was in a rush, we didn't have time to read the paper."

The Nigerian man, who asked not to be named, is now among the hundreds living in the Pournara camp in Kokkinotrimithia near Nicosia, where a May heatwave saw temperatures soar to 43 degrees Celsius (109 Fahrenheit).

The move angered rights groups such as the Cyprus Refugee Council, which said migrants face "very difficult conditions" in the "closed, overcrowded and tented camp ... without clear information as to when they will be allowed to leave."

But Greek Cypriots say they can no longer afford the 19-million-euro ($21-million) annual bill to house migrants in hotels and are asking for European Union help as the influx shows no sign of abating.

Nouris wants to accelerate asylum procedures and repatriations, insisting that "we have a huge volume of migrants, and 75% are not refugees."

The EU says that in spring 2019, Cyprus was receiving three times as many asylum applications per month, adjusted for population, as Greece.

Since the migrant "Balkans route" from Turkey to central Europe was blocked in 2015, asylum applications in Greek Cyprus have soared – from 2,253 that year to 13,648 in 2019, the interior ministry says.

While many hail from countries rocked by conflict and ethnic strife – particularly Syria and Cameroon – the ministry says that Indian, Pakistani and Bangladeshi applicants far outnumbered those fleeing war zones so far this year.

Nouris insisted that "yes, we are very willing to host refugees. But we can no longer host in this country, in these numbers, all the economic migrants."

Since the Nigerian man was transferred to the camp on orders from Nouris' office, he has been unable to leave. Despite eased coronavirus restrictions, migrants remain detained there under a health ministry order citing a scabies outbreak in the camp.

Doros Polycarpou of migrants' rights group KISA said moving people to camps with no chance to appeal was "a serious violation" of existing rules.

"This is the way of giving the message: don't come to Cyprus any more," Polycarpou said.

Another Nigerian asylum-seeker, who also asked to remain anonymous, said that faced with the choice in early May, he had opted for repatriation.

"I was in the camp before, when I first arrived in Cyprus," he said. "I don't want to go back. Ever. It's a horrible place."

Nouris said improvements were underway and that once the scabies outbreak was dealt with, migrants would be allowed to come and go from Pournara, as with Kofinou, another migrant camp.

Nouris, appointed in December, is pushing to accelerate asylum procedures, hiring new staff and proposing legislation to slash the wait for a final decision.

He is also launching a multilingual SMS campaign to inform migrants that Greek Cyprus, which is outside Europe's open-borders Schengen area, is not a gateway to the EU.

Crucially, he called for more EU support, citing the challenges of integrating large numbers of refugees into a small population.

The Greek Cypriot administration, an EU member, says it is on the front line of the Mediterranean migration route with the highest number of first-time asylum seekers per capita. Several migrant boats carrying Syrians have reached Cyprus in recent months.

The island has not seen the massive inflows experienced by Turkey and Greece however.

Turkey allows asylum seekers to enter Europe by land, but not by sea, as the latter is too dangerous.

With an aim to save the migrants from the dangers of the illegal route, the Turkish Coast Guard Command has been working hard on the shores, rescuing migrant boats nearly every day.

With 3.7 million Syrian migrants in Turkey already, more than any other country in the world, Ankara says it cannot absorb another wave of refugees.