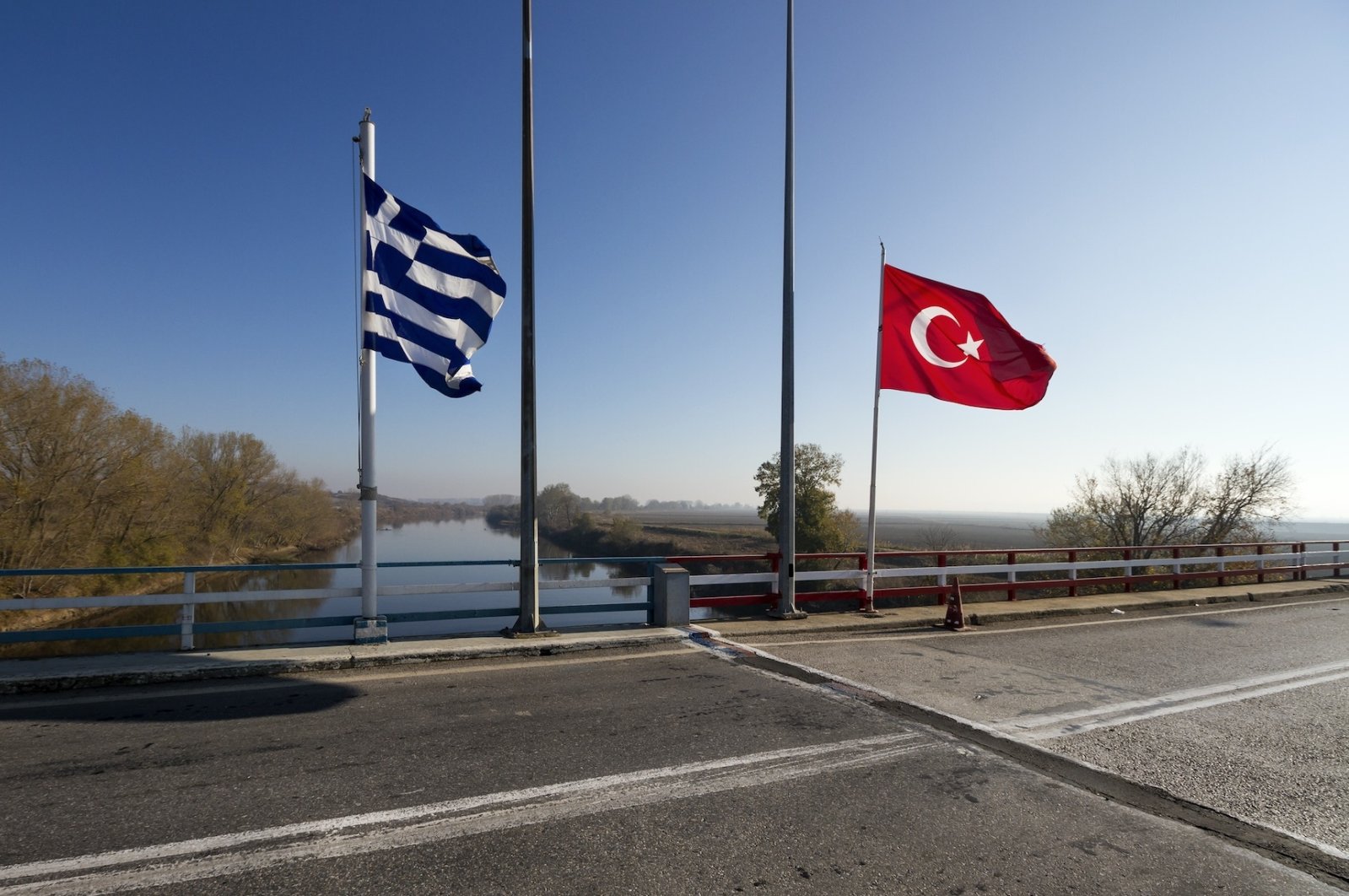 The Greek-Turkish border line right on the bridge over the Meriç river (Evros river in Greek), in Thrace region. The grey line on the road marks the exact point where the two countries meet. (Photo: yiannisscheidt / Shutterstock)
by Emre Başaran Aug 04, 2020 1:36 pm

Experts say that Hagia Sophia tensions will not pose permanent risks to bilateral relations between Turkey and Greece, and the maritime jurisdiction in the Mediterranean is the main challenge in ties

A series of regional developments have recently increased the tensions between Turkey and Greece, further extending the already-present differences and putting the larger regional stability at risk.

Confrontations between the two neighbors are nothing new and have been present, over various issues, since the earliest days of their bilateral relations. However, the fact that they have always managed to continue neighborly relations at the same time, gives hope for the future.

Experts have pointed at the lack of communication as the main reason behind the current feud. "The first and main problem in Greek-Turkish relations is the lack of dialogue,” said Vana Stellou, an Istanbul-based Greek journalist.

According to Stellou, whose main area of interest is Turkish-Greek diplomacy, the two countries’ deep historical ties enable both to understand each other and empathize, making communication the key factor in bilateral relations.

"There must be constant open channels of communication and diplomatic channels between the two countries in order to discuss and solve any problem that may arise," she said.

The recent interventions by Germany and other European countries that believe in the good Greek-Turkish relations and dialogue are moving in the same direction.

Turkey and Greece’s diplomatic relations began to improve in the late 1920s, after the collapse of the Ottoman Empire and the end of decadeslong war between the two. With the re-establishment of both states as republics at the turn of the century, the then leaders of Turkey and Greece, Mustafa Kemal Atatürk and Eleftherios Venizelos, respectively, decided to begin a normalization period in bilateral relations, opening embassies at each others’ territory shortly after. The ties between the two has since witnessed a rocky journey, with an ongoing risk of a possible collapse in dialogue at each new crisis, especially with the highly disputed Cyprus issue.

Turkey and Greece also have several disputes in the Aegean Sea, including the extent of territorial waters, airspace and continental shelf.

The Foreign Ministry previously accused Greece of attempting to abuse international organizations, including NATO, and draw them into Aegean disputes to justify its national positions, particularly by militarizing its islands in the Eastern Aegean.

The ministry also released statements reminding Greece that the Eastern Aegean islands were put under demilitarized status by virtue of several international agreements, including the Treaty of Lausanne of 1923 and the Treaty of Paris of 1947.

The recent developments regarding the Hagia Sophia Grand Mosque and drilling activities in the Eastern Mediterranean among others caused yet more tension in ties, with both sides expressing discontent over each others’ actions.

Hagia Sophia’s reversion to a mosque last month came under the global spotlight, in particular, with the harshest reactions coming from Greece, even to the point of burning Turkish flags.

Referring to the reversion as a "complex issue," Stellou said despite serious reactions from Greece, the decision was actually nothing but Turkey’s sovereign right, making all the negative responses null and void in the face of the law.

"We must make it clear that the Turkish government has acted within the ambit of the law. Indeed, it is Turkey's sovereign right to change the status of Hagia Sophia and as an internal affair of Turkey, no one else has the right to intervene. Turkish-Greek relations may have been burdened by Hagia Sophia's reversion testing the sensitivities of the Greeks, however, this should not fuel religious fanaticism and intolerance especially while being in a critical juncture of the Turkish-Greek relations," Stellou underlined.

On July 10, Turkey’s Council of State annulled a 1934 Cabinet decree that transformed the Hagia Sophia into a museum, paving the way for its use as a mosque. Two weeks after the court’s ruling, the first prayer at Hagia Sophia was held with the attendance of some 350,000 people, along with top political figures in Turkey, including President Recep Tayyip Erdoğan.

Following the incident, Greek Prime Minister Kyriakos Mitsotakis called Turkey a "troublemaker" and the reversion of the site an "affront to the civilization of the 21st century."

No matter how harsh the reactions were, experts highlighted that these crises should not be regarded as something permanent, in fact, they are all temporary.

"Turkish-Greek relations get better from time to time and get worse sometimes," said İhsan Aktaş, chairman of GENAR Research Company, on the tensions over Hagia Sophia's reversion.

"Greece’s reactions have been romantic, reactionary and emotional. If such reactions were shown 40 years ago, it might have been a diplomatic crisis but in today’s world, these can be countered even only by polite responses," he added.

"The Hagia Sophia issue has caused some reactions among the Greeks, that is why the government is so sensitive about the issue," he stated, adding that some factions and the Orthodox Church pay a lot of attention to the issue over the Megali Idea.

The Megali Idea was an irredentist concept that aimed to revive the Byzantine Empire by establishing a Greek state, which would include the large Greek populations that were still under Ottoman rule after the end of the Greek War of Independence between the years of 1821 and 1828, and all the regions that were previously ruled by the Greeks, such as parts of the Southern Balkans, Asia Minor and Cyprus.

"The main topic of discussion in Greece is always Turkey. That is because of the fact that they are a relatively much smaller country than Turkey, both in terms of area and population. But Greece comes to the spotlight in Turkey relatively rarely," Pirinççi concluded.

Turkey’s response to Greece’s reaction over Hagia Sophia has also been quite firm with Erdoğan highlighting "Istanbul belongs to the Turkish nation and Muslims," while Turkish Foreign Ministry condemned hostile statements made by members of the Greek government and Parliament as "provoking the public opinion."

Turkish authorities also highlighted the fact that the Greek oppression against the Muslim Turkish minority in the country has been registered by the rulings of the European Court of Human Rights, pointing at the country’s hypocritical stance.

"In Athens today, hundreds of mosques exist unofficially in the basements, courtyards and rooftops of houses. Back in 2006, the Greek parliament decided to build the first mosque in Athens, which has not been done so far," Stellou said, adding that the delay is mostly the result of the "strong resistance" of the Orthodox Church, extremist nationalist organizations and parties. As a result, Athens remains the only European capital that does not have a mosque.

In contrast to Greece, Turkey has a substantial Orthodox community, especially in Istanbul. In fact, the Patriarchate in Istanbul is considered the heart of the Orthodox world and dates back to the Byzantine Empire, which collapsed when the Ottomans conquered the city in 1453.

"In the area where I live, there are three churches as well as Aya Ekaterini's Αyazma, which are open to the public. In fact, in the same square where my house is located, different cultures and religions coexist harmoniously: Jews, Christians, Muslims, as well as foreign students and workers based in Istanbul," Stellou said about her own experience on the multicultural environment in Istanbul, adding that Turkey is not well-recognized by the western world in this respect, causing many prejudices toward the country to take hold.

While the discussion over Hagia Sophia and the situation of the religious minorities in both countries have made the headlines recently, developments in the Eastern Mediterranean and Libya have become yet two more points of disagreement.

On Nov. 27, Turkey and Libya's Tripoli-based Government of National Accord (GNA) signed a bilateral memorandum, enabling Turkey to secure its rights in the Mediterranean while preventing any fait accompli maneuvers by other regional states.

Fellow regional actor, Greece, did not welcome the deal and even regarded it as a violation of its own rights, though international law deems otherwise.

"The reason for the reactions against Turkey-Libya deal is mainly due to the use of natural resources, as the region is suspected of having hydrocarbon and oil underneath, Turkey’s moves in the Eastern Mediterranean are compliant with international law," said Deniz Baran, a faculty member at Istanbul University's International Law Department.

"There are some issues in international maritime law, which can vary in interpretation, such as the calculation of maritime jurisdiction," he added.

Baran said that in such a complex issue, there is the clash of arguments.

"The arguments of many countries in the region, like Turkey, Greece and Egypt, are in contradiction. We cannot say that these countries’ relatively arguments are against the international maritime law," he said, underlining that the contradictions arise from different interpretation of the law.

On May 2019, Turkish drillships began offshore drilling operations in areas off the coast of Cyprus. The areas fall entirely within the Turkish continental shelf registered with the U.N. and in permit licenses that the Turkish government in previous years had granted to Turkish Petroleum, the country's national oil company.

Turkey has stressed it wants to see energy as an incentive for political resolution on the island and peace in the wider Mediterranean basin, not a catalyst for further tensions.

The decades since have seen several attempts to resolve the Cyprus dispute, all ending in failure. The latest, held with the participation of the guarantor countries – Turkey, Greece, and the U.K. – came to an end without any progress in 2017 in Switzerland.

"When we look at Turkey’s arguments, we can see that they are pretty solid. Our claims follow the modern maritime laws," he added.

Regarding the issues around maritime jurisdiction, Baran added that Greece’s demand to be perceived as an archipelagic state has no basis and is arbitrary.

"Nevertheless, prominent Greek islands like Crete lead to limiting of Turkey’s jurisdiction. These cannot be called arbitrary," he added.

For many pundits, the dispute in the Eastern Mediterranean is highly intertwined with the development in Libya, which has been suffering from a civil war since 2011.

“By trying to establish a military presence in the North African country, Turkey is shifting its balance in Libya and is further expanding its regional power, becoming a strong player among other regions in the Eastern Mediterranean and the Balkans," Stellou said, explaining why Turkey’s moves in the war-torn country are regarded as concerning by the other regional countries, including Greece.

Since the ouster of late ruler Moammar Gadhafi in 2011, two seats of power have emerged in Libya: one in eastern Libya supported mainly by Egypt, France, and the United Arab Emirates (UAE), and the other in Tripoli, which enjoys U.N. and international recognition.

Putschist Gen. Haftar's eastern-based forces aim to capture the capital, Tripoli, through the backing of Egypt, the UAE, Russian mercenaries and some African troops.

Although Greece does not have direct involvement in the Libyan war, Turkey’s close ties with the Libyan government indirectly affects Greece as it tests the country's regional interests.