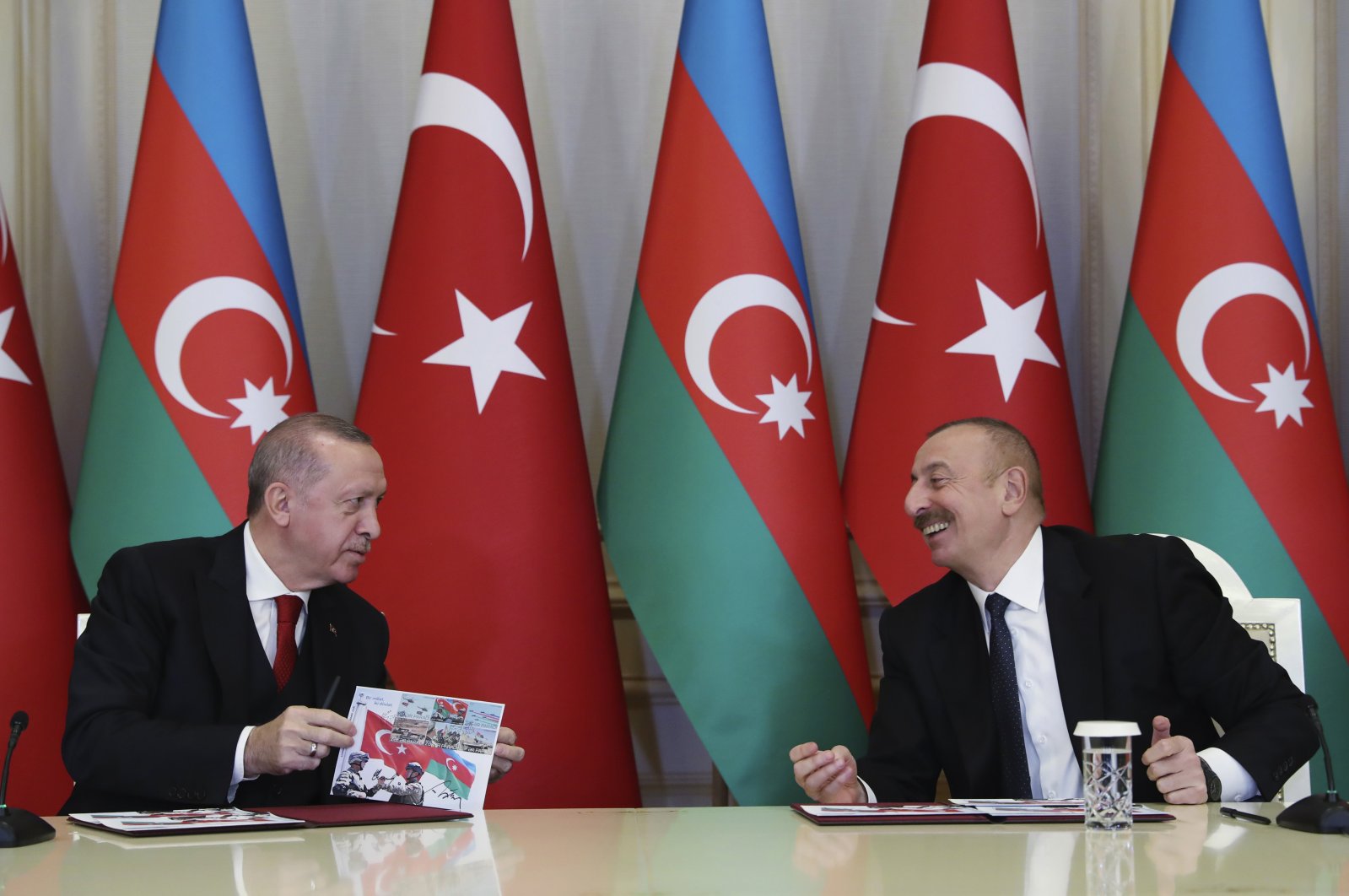 A six-country regional cooperation platform would be a win-win initiative for all regional actors in the Caucasus, President Recep Tayyip Erdoğan said Friday.

Speaking to members of the Turkish press accompanying him as he attended victory celebrations in the Azerbaijani capital Baku, Erdoğan described his recent visit to Azerbaijan as historical and said the victory in Karabakh was a turning point for Turkey-Azerbaijan relations.

“The principle of ‘one nation, two states’ is the main philosophy of our solidarity with Azerbaijan. This unity and solidarity have been crowned with the liberation of Karabakh. During the 44-day process that brought the Karabakh victory, we have sided with Azerbaijan with every moment,” he said.

The president also said that the Karabakh victory has opened a new page in the history of the Caucasus region and the region’s history will be shaped in a new direction after that.

Commenting on his proposal of forming a six-country regional cooperation platform, Erdoğan said that is an initiative that can provide win-win opportunities for all parties.

“If Armenia joins this process and takes positive steps, a new page in the Turkey-Armenia relations can be opened. If new opportunities arise, it is obvious that Armenia will also have a serious advantage. Armenia will be the side gaining most from it.”

On Thursday, Erdoğan elaborated the idea of the six-country regional cooperation platform including Russia, Turkey, Azerbaijan, Iran, Georgia and Armenia during his visit to Azerbaijan where he attended the ceremony of the Victory Parade in the capital Baku upon invitation of Aliyev.

The president restated that the borders between Turkey and Armenia can be opened if Yerevan takes positive steps in the process and said that Turkey’s main aim is to provide support for regional peace between nations.

Commenting on Russia’s perspective on the initiative, Erdoğan said Russia’s President Vladimir Putin is positive about it. The two sides have agreed to further develop this effort, he added.

Erdoğan also reiterated his criticism of French President Emmanuel Macron and said that he did not make any contribution to the solution process in the Karabakh conflict despite France’s role as the term chair of the Organization for Security and Co-operation in Europe (OSCE) Minsk Group, which is co-chaired by France, Russia and the U.S. and was formed in 1992 to find a peaceful solution to the conflict.

Ankara has pledged its full support to Baku in its efforts to liberate its lands from Armenian occupation. About 20% of Azerbaijan's territory had been under illegal Armenian occupation for nearly three decades. In the most recent conflict that began on Sept. 27, Azerbaijan took back much of the land in and around the Nagorno-Karabakh enclave that it lost in a 1991-1994 war that killed an estimated 30,000 people and forced many more from their homes. Aliyev had expressed multiple times during the most recent conflict that if there was to be peace, Baku wanted to see Ankara at the negotiating table as well.

Following the Nov. 10 signing of a Russia-brokered agreement to end the fighting and work toward a comprehensive resolution, Turkey agreed with Russia that its troops would also monitor the cease-fire. Last month, Ankara and Moscow signed an agreement to establish a joint observation center in Nagorno-Karabakh as soon as possible.

He said that the two countries will continue to improve their relations in all areas and Turkey will play a crucial role in the reconstruction of the Karabakh region.

According to one of these protocols, Turkish and Azerbaijani citizens will be able to travel to both countries by presenting solely their ID cards, the Turkish Foreign Ministry said Friday.

"This new regulation, which will enhance contact between our peoples, is at the same time highly meaningful in displaying the level our relations with dear Azerbaijan has reached," the ministry said in a written statement.

The president also reminded that Turkey has an agreement on military training with Azerbaijan, which was approved in Parliament and stated: “The agreement on education together with this cooperation will carry our solidarity to a different platform.”

“In this regard, we have strengthened our ties with Russia in solidarity,” he said.

Erdoğan stated that Turkey can provide this training to the Azerbaijani military on Azerbaijani soil while Baku's soldiers are also welcome to come and receive their training in Ankara.

Saying that both countries already cooperate in various fields including intelligence, Erdoğan stated that cooperation will continue in political, military, economic, cultural, diplomatic as well as other fields. “Cooperation will not only be made at the level of leaders but rather will continue with all ministers and other units in a selfless manner.”

Within the scope of cooperation, both countries have recently entered a media cooperation agreement.

Indicating that this is not the first international media cooperation agreement for Turkey, Erdoğan noted that Ankara has similar collaborations with Pakistan and Malaysia. The president added that both Azerbaijan and the region need such works and that other countries may join the agreement.

A memorandum of understanding (MoU) was signed on Thursday by Turkey’s Presidential Communications Director Fahrettin Altun and Azerbaijani Presidential aide Hikmet Hajiyev under the supervision of Erdoğan and Aliyev.

According to the Communications Directorate, within the scope of the Joint Media Platform, information, experience and resources will be shared to establish a healthy media relations network infrastructure while the official media institutions of both countries will carry out joint works.

The platform, which will work toward fighting misinformation in the international arena and informing the international public opinion correctly, will establish a bridge between the two countries’ opinion leaders and representatives of various media outlets, while vocational training and exchange programs will also be created.