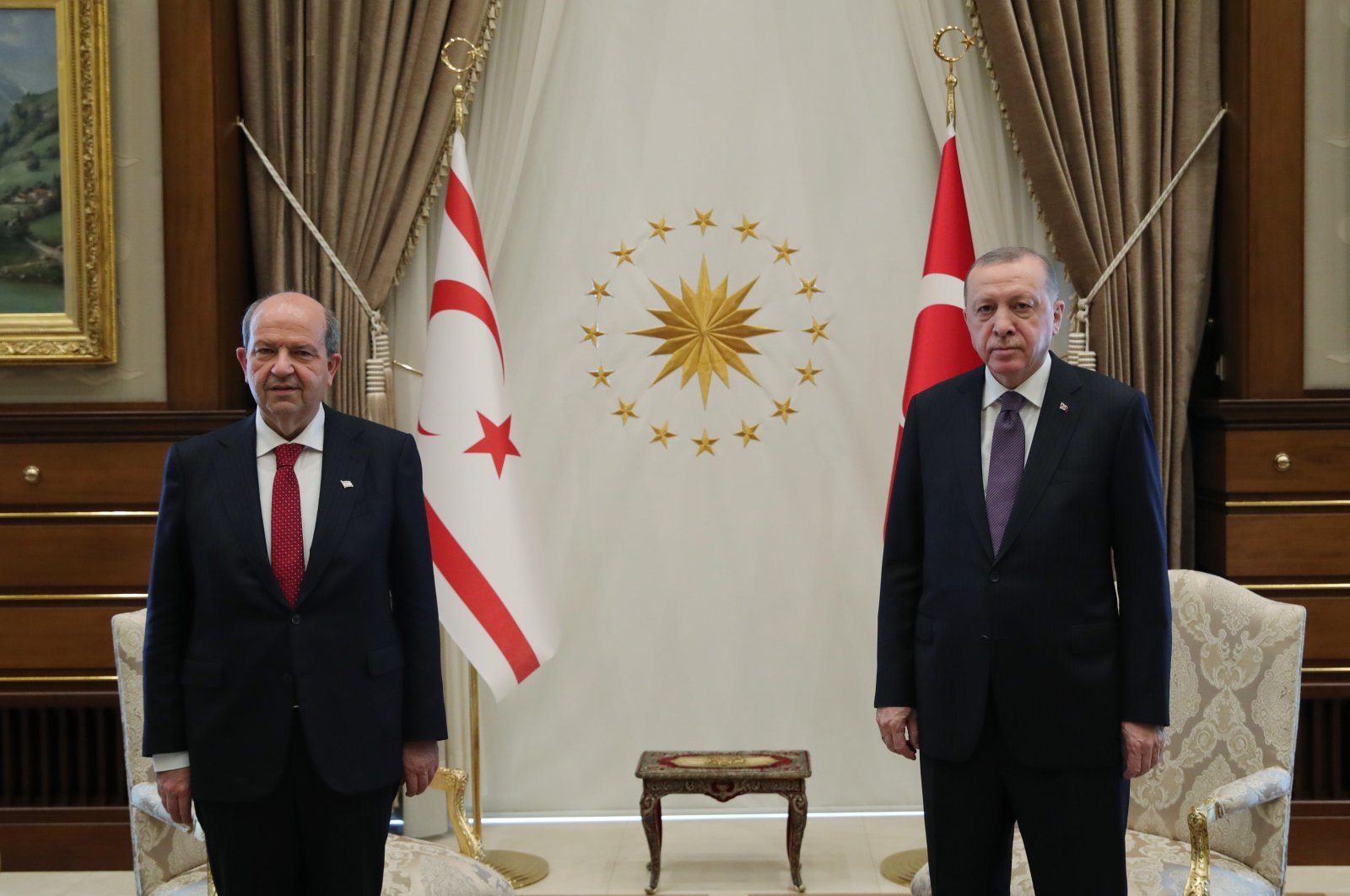 Turkish Republic of Northern Cyprus (TRNC) President Ersin Tatar visited Turkey on Monday upon an invitation from President Recep Tayyip Erdoğan, where the two leaders discussed a two-state proposal ahead of Tuesday’s Cyprus conference led by the United Nations.

According to a statement from Turkey's Communications Directorate earlier Sunday, bilateral ties would also be on their agenda.

The Turkish and Greek Cypriot leaders, along with the three guarantor countries – Turkey, Greece, and the United Kingdom – will come together at a U.N.-led three-day Cyprus conference in Geneva Tuesday. They will seek common ground to negotiate a lasting solution to the decades-old conflict on the island.

U.N. Secretary-General Antonio Guterres will participate in the meetings to determine a "common ground" on which the parties can negotiate in order to find a permanent solution to the Cyprus issue in the near future.

The Turkish Cypriot side will be defending the new vision of two states, based on sovereign equality and cooperation, in the meeting.

"The Greek Cypriot side takes steps and signs agreements on its own. They claim that it is unnecessary to ask the Turkish Cypriots. We cannot accept this," Tatar said Sunday in an interview with the Greek daily, Kathimerini.

Underlining that Turkish Cypriots are as sovereign as the Greeks on the island, Tatar said neither side can spread its sovereignty on the other side as both peoples have their own free, self-government.

"We will never accept the thesis of a federation that will go to a unitary structure," he added.

In another interview with the British Sunday Express, Tatar said the U.K. can assist a "historic opportunity" to end a decadeslong stalemate in Cyprus by recognizing the TRNC as a sovereign state.

“After Brexit freed Britain from the EU, it can now fulfill its role as a neutral guarantor for the eastern Mediterranean island, ensuring that both Greek Cypriots and Turkish Cypriots are treated in a balanced way," he added.

Citing sources in the British government, the daily said U.K. ministers are considering officially recognizing the TRNC as an "independent country."

Resolving the longstanding dispute on the island would help around 300,000 Turkish Cypriots, who live in the U.K., seek direct flights to their country, the daily added.

"With the developments in the Eastern Mediterranean, the island has become even more valuable," Tatar told the daily.

Tatar added that a two-state plan is now the only way forward and one which has the full backing of the Turkish government.

"It is the facts on the ground. What we have at the moment is peaceful coexistence with two neighboring states," he noted.

The issue has seen an on-and-off peace process in recent years. The latest talks, which began on June 28, 2017, and were monitored by Guterres' special adviser on Cyprus, Espen Barth Eide, failed after 10 days of intense discussions. The Greek Cypriot side leaked files, which the U.N. had classified as confidential, to the Greek media before sending them to the U.N. and the Turkish side, and while the Greeks never strayed from their discourse of "zero troops, zero guarantees," they also did not take any constructive steps toward offers and suggestions.

Prior to that, in 2003, the TRNC government eased the crossing restrictions for Turkish Cypriot citizens and allowed crossings to be made with identity cards and passports without prior notice, while also easing restrictions for those traveling from Greek Cyprus to Turkish Cyprus. The move was a gesture of normalization and goodwill. The following year, the Greek Cypriot administration joined the EU, despite the division of the island.