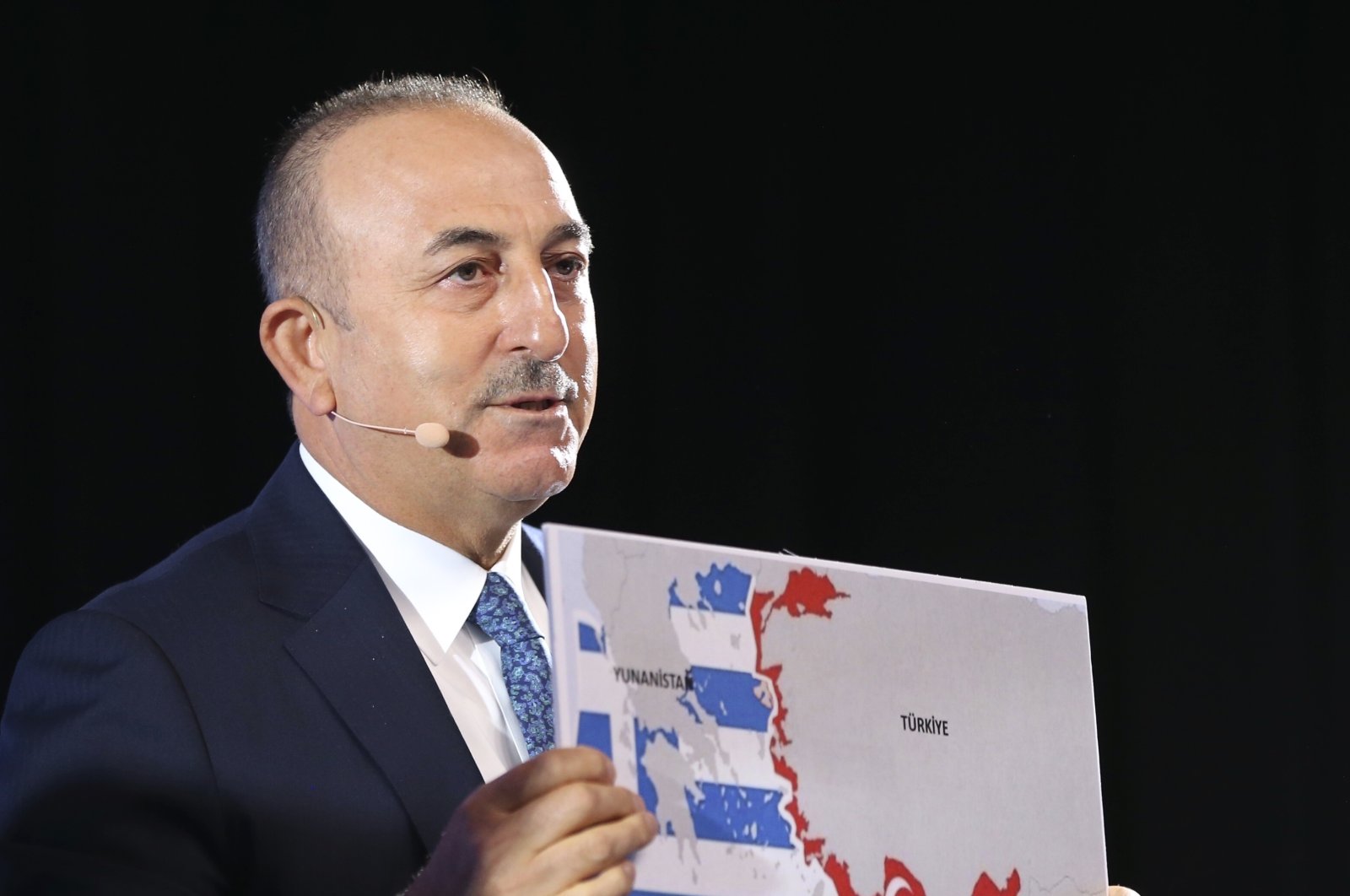 Foreign Minister Mevlüt Çavuşoğlu shows the Seville Map, which represents Greece and the Greek Cypriot administration's maximalist claims in the Eastern Mediterranean, as he speaks during a conference in Bratislava, Slovakia, Oct. 8, 2020. (AP Photo)
by DAILY SABAH Oct 13, 2020 9:04 pm
RECOMMENDED

The statement by Ankara noted that the U.S. had rejected the Seville Map, which represents Greece and the Greek Cypriot administration's maximalist claims in the Eastern Mediterranean. Despite its rejection of the Seville Map, criticizing Turkey’s survey activities within its continental shelves is a serious inconsistency, the statement said.

“This inconsistency is also observed in statements by some EU members,” it added.

The statement also said that Greece and Greek Cyprus are the sides who escalate the tensions in the region, not Turkey.

Earlier in the day, the U.S. described Turkey's survey activity in the Eastern Mediterranean as a "provocation" and urged Ankara to stop searching and begin immediate exploratory talks with Greece.

Ortagus claimed that Turkey's announcement "unilaterally raises tensions" in the region and "deliberately complicates" the resumption of crucial exploratory talks between NATO allies Greece and Turkey.

"Coercion, threats, intimidation and military activity will not resolve tensions in the Eastern Mediterranean. We urge Turkey to end this calculated provocation and immediately begin exploratory talks with Greece," she said. "Unilateral actions cannot build trust and will not produce enduring solutions."

Renewed efforts of the Oruç Reis in the Eastern Mediterranean will be within the Turkish continental shelf hundreds of kilometers away from the Greek mainland, Turkey's Foreign Ministry said Monday.

It urged Greece to withdraw its maximalist demands, end military drills that escalate regional tensions and establish a sincere dialogue through exploratory talks.

The Turkish vessel's return comes a day after Turkey's Foreign Ministry issued a statement accusing Greece of “insincerity” for what it said was Athens' continued actions to raise tension while declaring itself to be ready for dialogue. Among other things, the Turkish Foreign Ministry accused Greece of declaring military exercises in the Aegean Sea to coincide with Turkey's Oct. 29 national day celebrations. Turkey retaliated by declaring exercises on Oct. 28, the statement said.

In August, Turkey had also resumed energy exploration in the Eastern Mediterranean after Greece and Egypt signed a controversial maritime delimitation deal, spurning Turkey's goodwill gesture in halting its search.

Declaring the Greek-Egyptian deal "null and void," Turkey had authorized the Oruç Reis to continue activities in an area within Turkey's continental shelf.

The talks had been stalled since 2016, and the expectation was for their resumption in Istanbul but no exact date was given.

The Turkish and Greek foreign ministers also met last week on the sidelines of a security forum in Slovakia's capital Bratislava in the highest-level talks since tensions began. The ministers had agreed that a date should be set for the start of exploratory talks.

Turkey has demanded that the disagreements it has with Greece be handled as a whole. These include territorial waters in the Eastern Mediterranean, the continental shelf, demilitarization of the islands, the legal status of geographical formations, the width of national air space and search and rescue operations.

Turkey has consistently opposed Greece's efforts to declare an EEZ based on small islands near Turkish shores, violating the interests of Turkey, the country with the longest coastline in the Eastern Mediterranean.

Ankara has also said energy resources near the island of Cyprus must be shared fairly between the Turkish Republic of Northern Cyprus (TRNC) and the Greek Cypriot administration of southern Cyprus.