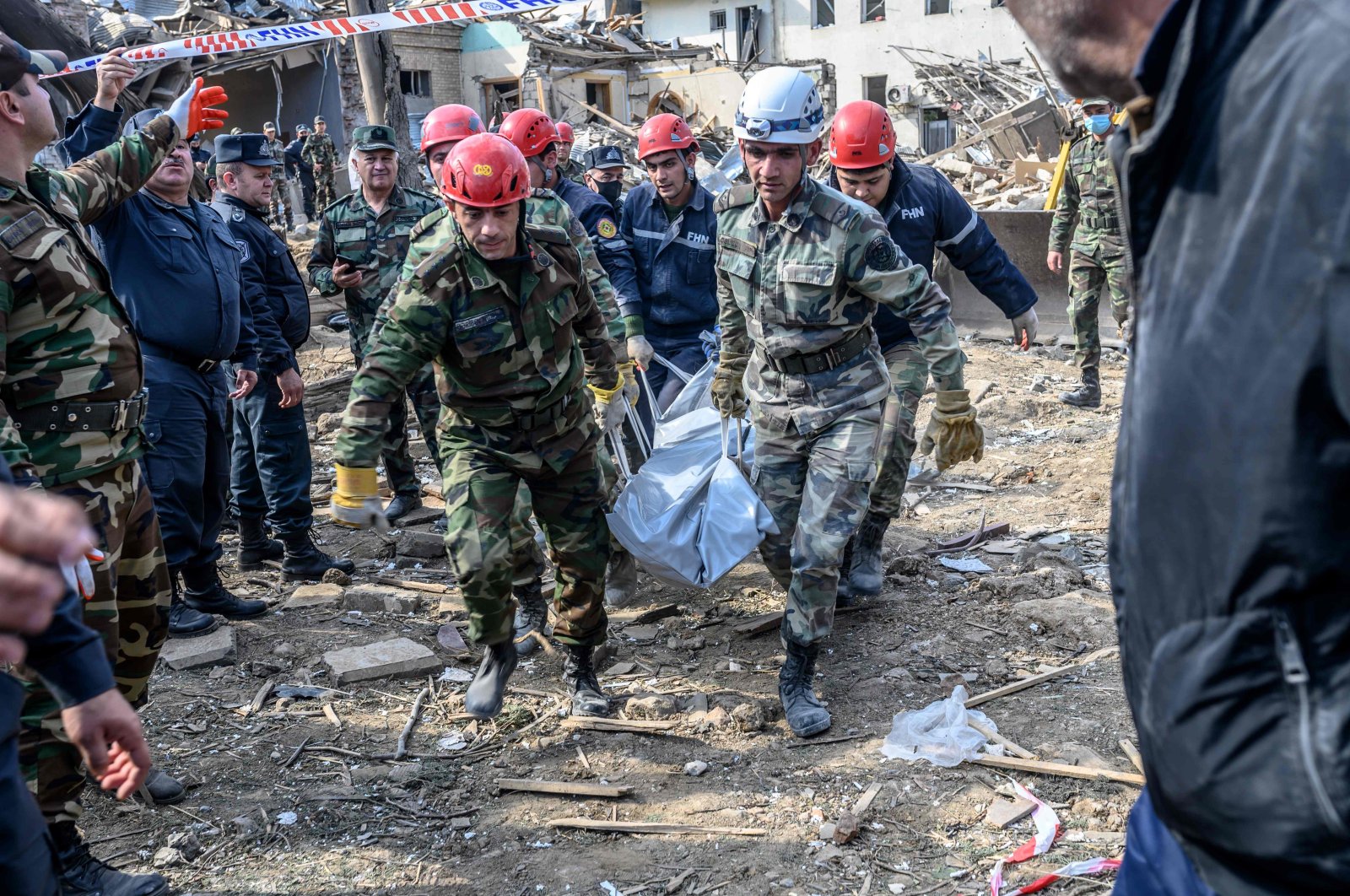 New hopes for peace have already been dashed in occupied Nagorno-Karabakh as Armenia has breached the cease-fire in effect, targeting civilians in Azerbaijan's Ganja city and causing thousands to suffer

The cease-fire between Azerbaijan and Armenia could not survive even for a full day, as Yerevan launched an attack on Azerbaijan's second-largest city, Ganja, killing nine while injuring 34 others.

Taking place in less than 24 hours from the inking of the declared cease-fire, Armenian missiles hit civilian settlements in Ganja, where the search and rescue work continues among the wreckage.

According to a statement from the Azerbaijani office of the chief prosecutor, four of those killed included civilians – a woman, as well as the 16 injured, six of which were children.

Although Yerevan immediately denied the attack, footage from the area confirmed Azerbaijani statements, with a Reuters photographer in Ganja witnessing rescue workers carrying one dead person from the ruins of a large apartment building on Sunday morning. The structure was almost leveled, the photographer confirmed, as excavators cleared the debris.

Buildings and cars in the immediate vicinity had also been severely damaged, the photographer further explained.

Baku accuses Yerevan of also launching an unsuccessful rocket attack on an Azerbaijani hydro-electric power station in Mingachevir, which was also denied by Yerevan.

Azerbaijan states that other attacks also have taken place in the cities of Tartar and Agdam, while one health worker was killed in Suqovuşan as an Azerbaijani ambulance was hit by Armenian forces.

The Azerbaijani prosecutor's office confirms that with all assaults combined, Armenian forces have killed a total of 41 Azerbaijani civilians since the beginning of the conflict, injuring 205.

The number of damaged homes has reached 1,165, while 57 buildings and 146 public buildings have also become unusable amid the Armenian attacks.

One witness said they were woken by a huge blast that leveled an entire square block of one and two-floor houses in the early hours of the morning.

“Everything I’ve worked for my entire life has been destroyed,” said resident Zagit Aliyev, 68.

A cease-fire between the warring parties was agreed to start at noon Oct.10 and was announced following 10 hours of talks in Moscow.

The talks between the foreign ministers of Armenia and Azerbaijan were held upon the invitation of Russian President Vladimir Putin, who brokered the cease-fire in a series of calls with President Ilham Aliyev of Azerbaijan and Armenia's Prime Minister Nikol Pashinian. Armenia said it was open to a cease-fire, while Azerbaijan previously made a potential truce conditional on the Armenian forces’ withdrawal from Nagorno-Karabakh, arguing that the failure of international efforts to negotiate a political settlement left it no choice but to resort to force.

Fighting began on Sept. 27, when Armenian forces targeted civilian Azerbaijani settlements and military positions in the region, leading to casualties. Relations between the two former Soviet republics have been tense since 1991 when the Armenian military occupied Nagorno-Karabakh, an internationally recognized territory of Azerbaijan. Some 20% of Azerbaijan's territory has remained under illegal Armenian occupation for some three decades. Four U.N. Security Council (UNSC) and two U.N. General Assembly (UNGA) resolutions, as well as many international organizations, demand the withdrawal of the occupying forces.

As a response to the attacks, Aliyev said on Sunday that the Armenian administration is responsible for “all these crimes,” adding that Azerbaijan has no reservations reiterating the statement for all.

“The attacks are a disrespect to the negotiations mediated by Russia and yet another reflection of the Armenian fascism,” the president continued and highlighted that the attacks will not break the will power of the Azerbaijani people.

"Ganja, a symbol of resistance to Armenia's state terrorism and vandalism," also said Hikmet Hacıyev, assistant of the president of the Republic of Azerbaijan and head of the Foreign Policy Affairs Department of the Presidential Administration.

Comparing the situation in Ganja to the 1992's Khojaly massacre, during which an Armenian offensive killed 613 Azerbaijani citizens in two hours, Hacıyev on Sunday called on the world to "See the gap between the civilized world and Armenia."

"Attacking civilians with destructive missiles out of the theatre of military operations is a war and military crime. It is a manifestation of the immoral behavior of Armenia's political-military leadership," he said on his Twitter account.

A similar call also came from Ankara, as the Turkish Defense Ministry said Sunday that international public opinion should "speak up" against Armenia.

"Committing war crimes and crimes against humanity, Armenia now violates the cease-fire," the Defense Ministry said on its Twitter account, adding: "Even in a cease-fire, Armenia continues to assault civilian settlements."

Turkish foreign ministry also condemned the attack on Sunday, saying that the move proves that Armenia does not see any problem in violating international humanitarian law in order to pursue its occupation.

Many world powers, including France, Russia and the United States, have urged an immediate cease-fire since the beginning of the conflict. Turkey, meanwhile, has supported Baku's right to self-defense and demanded the withdrawal of Armenia's occupying forces.

The Turkic Council, consisting of six Turkic countries, also condemned the Armenian attacks. In a statement released n the council's Twitter account on Sunday, it is said that the attacks should stop immediately and the occupiers should leave the Armenian soil as soon as possible.

Diplomatic efforts to resolve the Nagorno-Karabakh conflict for nearly the last three decades have been ineffective, a senior Azerbaijani official also said on Saturday, pointing at the complexity of the issue.

Addressing reporters in Istanbul, the official, who spoke on condition of anonymity, said: “We have always appreciated diplomatic and political efforts to resolve the conflict, but we have a right to say that these efforts over the last 28 years have not strong been enough, not affirmative enough and not effective enough."

He added that Azerbaijan is not against the Organization for Security and Co-operation in Europe (OSCE) Minsk Group's efforts but noted that it has yet to yield results.

The OSCE Minsk Group, co-chaired by France, Russia, and the United States, was formed in 1992 to find a peaceful solution to the conflict but to no avail. A cease-fire, however, was agreed to in 1994, which was also not lasting.

The official also said that Turkey is a regional power with legitimate interests and should be involved in regional matters, just like Russia.

Therefore, he said, Turkey must be involved in the conflict resolution of the region. He underlined that he appreciated Turkey’s efforts to support Azerbaijan, saying that Turkey has provided all kinds of support since Azerbaijan gained its independence.

The official also highlighted messages of support for Azerbaijan that have been coming from across from Turkey, claiming that the biggest difference between the two countries was that Azerbaijan as an independent nation can make its own decisions, whereas Armenia must double-check on what to do, implicating larger powers at play.