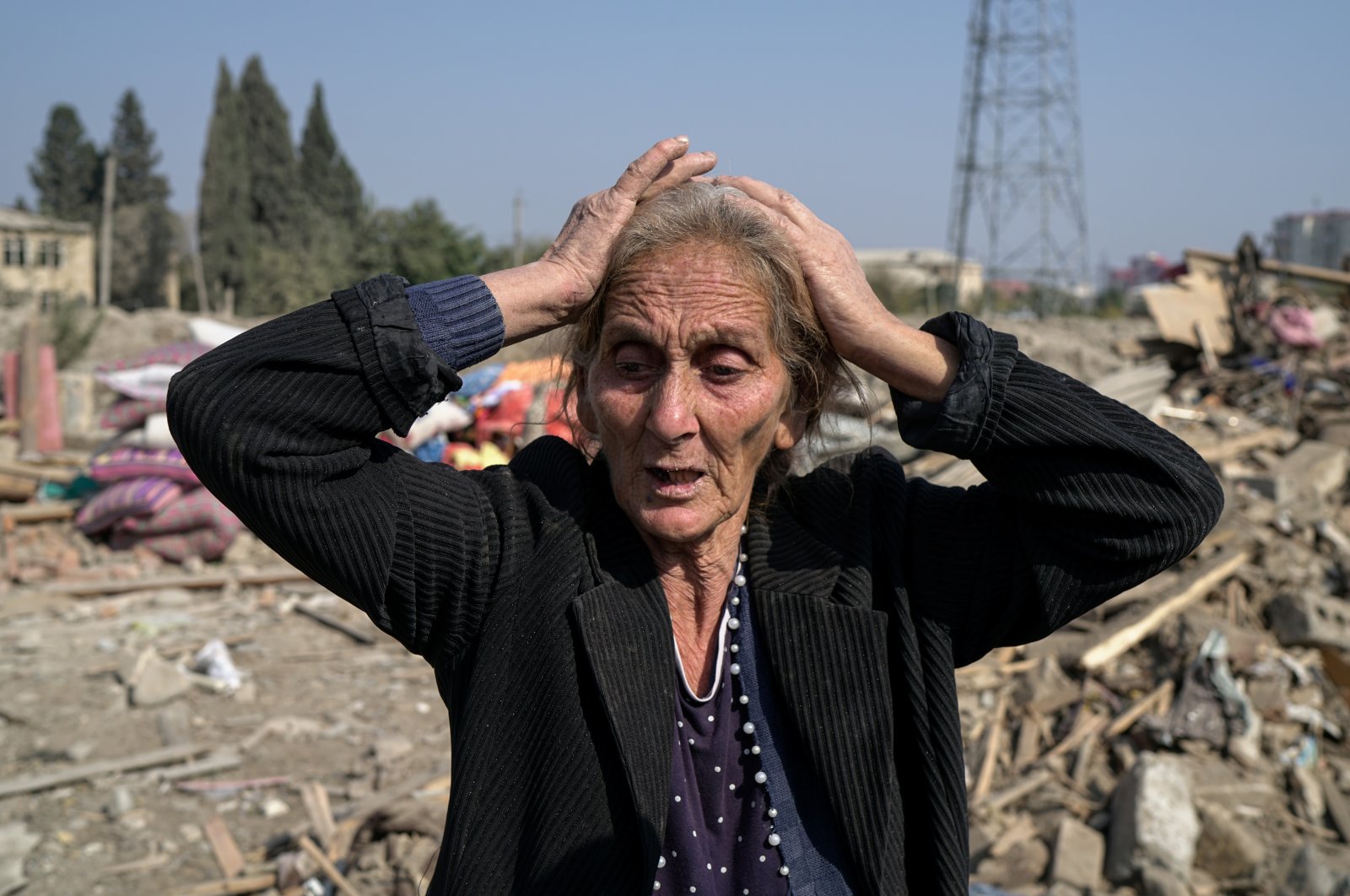 According to the statement, the missile attack did not claim any lives, but there were material losses in an amount that has not yet been announced.

Plans for U.S. Secretary of State Mike Pompeo to meet the foreign ministers of Azerbaijan and Armenia on Friday raised hopes this week that the two former Soviet republics would agree to end their deadliest fighting since the mid-1990s.

But those hopes have been dented by the continued heavy fighting in and around the occupied Nagorno-Karabakh region.

In two missile attacks on Ganja, a major Azerbaijani city far from the front line, Armenia killed some two dozen civilians, including children, and injured scores more. Last Thursday, Armenia also targeted civilians at a cemetery in the western city of Tartar, killing four and injuring four others.

The residents of Ganja are taking shelter at the local state university's dormitory after the Armenian Army shelled the residential areas in the city.

Hundreds of Ganja residents have been living in Azerbaijan Agriculture State University's dormitory for the past four days.

Speaking to Anadolu Agency (AA), Ibrahim Caferov, the university head, said the dormitory was closed due to the coronavirus pandemic and that they began to host the Ganja victims shortly after the Oct. 17 assaults.

"Thirty-five families, consisting of 110 people, have been staying (in the dorm) for about four days. We are serving (the victims) three meals a day," Caferov said.

The university will do its best to continue hosting the victims, he said, adding: "Families can stay here for two more months with the current facilities available."

Leyla Ekberova, a mother of two, said she was living with her family of 15 at their house shelled by Armenian missiles in their neighborhood in Ganja.

"Our house was severely damaged. ... The officials told us that we should not stay there and that the house could collapse at any moment," Ekberova told AA.

World powers, including Russia, France and the United States, have called for a new cease-fire. Turkey, meanwhile, has supported Baku's right to self-defense and demanded the withdrawal of Armenia's occupying forces.

Russian Foreign Minister Sergey Lavrov held two separate meetings with his Armenian and Azerbaijani counterparts in Moscow on Wednesday to discuss the implementation of a cease-fire.

"During the talks, urgent issues related to the implementation of previously reached agreements on a cease-fire in the Nagorno-Karabakh conflict zone and the creation of conditions for its sustainable settlement were discussed," the Russian foreign ministry said in a statement, following Lavrov's meeting with Armenian Foreign Minister Zohrab Mnatsakanyan and Azerbaijani Foreign Minister Jeyhun Bayramov.

However, hours after Lavrov's meeting, Armenian Prime Minister Nikol Pashinian urged citizens to sign up as military volunteers to protect their country and claimed that "Azerbaijan's aggressive stance" in the clash over Nagorno-Karabakh leaves no room for diplomacy.

In a live video address on Facebook, Pashinian said all Armenians must "take up arms and defend the motherland" and urged local mayors to organize volunteer units. He charged that Azerbaijan's "uncompromising posture" has shattered hopes for a political settlement.

"There is no way now to settle the Nagorno-Karabakh issue through diplomacy," Pashinian said.

"In this situation, we may consider all hopes, proposals and ideas about the need to find a diplomatic settlement effectively terminated," he added.

Hajiyev said the statement reflects Armenia's lack of interest in a diplomatic solution and disrespect for the efforts of international mediators.

As Yerevan's aggressive stance resumes, the Azerbaijan army continues to defend itself while gradually liberating the areas occupied by Armenia for almost 30 years.

"During the day of Oct. 21 and on the night of Oct. 22, combat operations in the Aghdara-Aghdam, Fizuli-Jabrayil, and Zangilan-Gubadli sections continued with varying intensity," the Azerbaijani defense ministry said in a statement.

It added that the defending units of the Armenian Army were forced to withdraw from important high ground and several positions, losing personnel and military vehicles.

"The D-20 battery of the 155th artillery regiment of the Armenian armed forces, located in the section of Khojavend, has a large number of wounded personnel," it said, adding that there was a lack of vehicles for their evacuation and the roads were closed.

Underlining that the Armenian volunteers fled the northern part of the Hadrut settlement, it said they suffered heavy casualties, including the deaths and injuries of personnel, as a result of artillery strikes on the fifth mountain rifle regiment in the Aghdere section.

It also said the commander of the regiment's third battalion went missing and the battalion's chief of staff was killed.

The destruction of the underground shelter wreaked major losses among Armenian military personnel, it said.

Noting casualties among Armenian units in the 543rd regiment, the ministry said that the regiment commander was wounded and that his deputy, battalion commander and his deputies and commanders of a mortar battery and a company were killed.

With fighting continuing across the entire front, Azerbaijani troops control the operational situation, it added.

Meanwhile, Azerbaijan also launched the mass production of the new type of "Kamikaze" drones, the defense ministry announced in a separate statement, adding that the drones, which are ready to use, are being delivered to the Azerbaijani army. The drones are named as "Iti qovan," meaning "dog repeller."

In general, Baku sources the majority of its defense equipment, including the "Kamikaze" drones, also known as "Harop," from Israel.

Other drones that are used by the Azerbaijani army are Turkey's Bayraktar TB2 Armed unmanned aerial vehicles (UAVs).

The drones are referred to by many pundits as real game-changers for Azerbaijan, strengthening the country's power against Armenia remarkably.