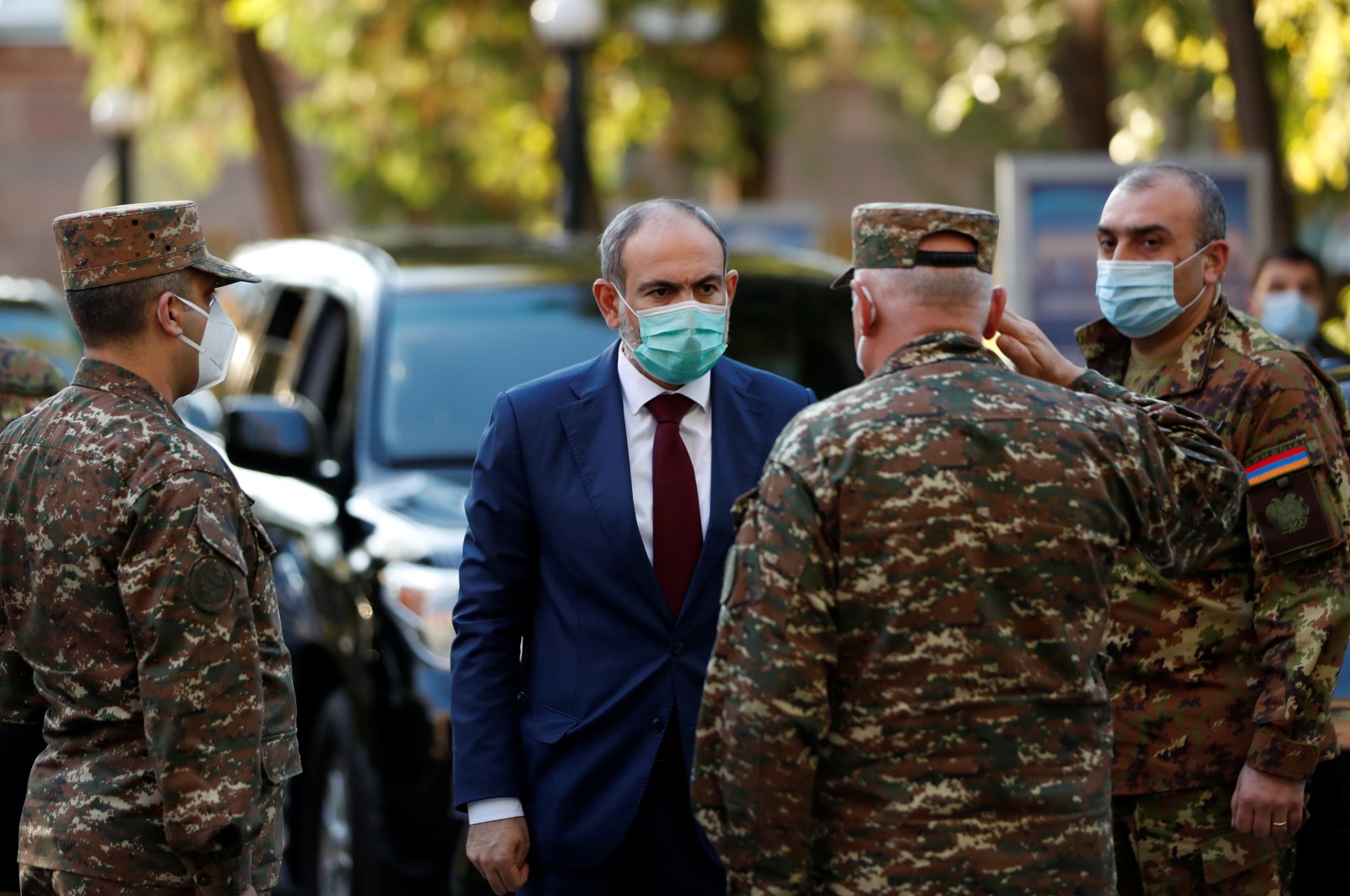 Armenian Prime Minister Pashinian 'painfully' signed a Russian-brokered deal after suffering heavy military losses in the occupied Nagorno-Karabakh, while Azerbaijan's President Aliyev hailed the agreement as a victory for his nation and Azerbaijanis celebrated in the streets

Azerbaijan and Armenia have reached a historic peace deal to end the decadeslong conflict in the occupied Nagorno-Karabakh, in a move seen as a victory for Baku and a defeat for Yerevan, as celebrations and protests followed the announcement of the deal in the respective countries.

Armenia, Azerbaijan and Russia said in the early hours of Tuesday they had signed a deal to end the military conflict over the region after more than a month of clashes.

Russian President Vladimir Putin said that the cease-fire has started and that Azerbaijani and Armenian militaries will remain in the positions they control.

The Moscow-brokered agreement, which saw a cease-fire take effect at 1 a.m. local time (9 p.m. GMT), came after a string of Azerbaijani victories in its fight to retake its occupied territories.

The deal sparked celebrations in Azerbaijan but fury in Armenia, where protesters took to the streets to denounce the country's leadership for losses.

VIDEO — Azerbaijanis celebrate the signing of a Baku-Yerevan peace deal that ended the longstanding conflict over the Nagorno-Karabakh region, which was illegally occupied by Armenia for almost 30 yearshttps://t.co/B7ocGpqWVX pic.twitter.com/Xd6FCuWWOf

Azerbaijani President Ilham Aliyev addressed the nation later Tuesday. Hailing the deal as a victory, Aliyev added that Armenian Prime Minister Nikol Pashinian was obliged to sign it after Azerbaijan liberated its occupied territories, especially the key town of Shusha, dealing a significant blow to Armenian forces in the area.

Aliyev said Pashinian signed the agreement thanks to Baku's "iron fist," not Yerevan's own will, and that the Armenian prime minister was too ashamed to attend the signing ceremony and will sign it like a "coward" later on.

He said Azerbaijan's liberation of around 300 settlements since Sept. 27 has weakened the Armenian forces.

Aliyev said the Agdam District will be delivered to Baku as of Nov. 20, while Kalbajar will be returned by Nov. 15 and Lachin by Dec. 1.

Calling the deal "historic," Aliyev said it ends the decadeslong Armenian occupation in the Azerbaijani territory and is a "glorious victory" for the Azerbaijani people.

The Azerbaijani president also said that a peacekeeping center would be created with "Russian and Turkish soldiers on duty" and Turkey would play a role in monitoring the cease-fire.

However, soon after, a statement came from the Kremlin, denying the reports of Turkish peacekeeping forces' deployment to the area.

Russia has already started sending its peacekeepers to the region.

Pashinian announced on Facebook early Tuesday that he had "painfully" signed an agreement with the leaders of Azerbaijan and Russia.

"I have signed a statement with the presidents of Russia and Azerbaijan on the termination of the Karabakh war," Pashinian said, calling the move "unspeakably painful for me personally and for our people." He said he had no other choice but to sign the deal.

Meanwhile, Armenian President Armen Sarkissian said he was not involved in the process of signing the peace deal, as he argued that the decision should have been made after a period of consultation and debate, as the issue is extremely important for the country.

The Kremlin released a statement shortly after Pashinian’s remarks, saying the parties have signed a deal on the "complete stoppage" of combat in Nagorno-Karabakh.

Pashinian added that he would address the nation "in upcoming days."

"I made that decision as a result of a deep analysis of the military situation," he said.

"We need to analyze our years of independence to plan our future and not repeat the mistakes of the past," Pashinian added.

The recent capture of Shusha was a major victory for Azerbaijani forces, who had been making gains against Armenian separatist fighters since new fighting erupted over Nagorno-Karabakh a month ago.

The town has significant military value because of its strategic location of about 10 kilometers (6 miles) south of the region's capital near Khankendi (Stepanakert) and on the road linking the city with Armenian territory.

The Armenian Army suffered "heavy losses" and fled its position on the front line.

Since fighting restarted on Sept. 27, at least 93 Azerbaijani civilians have been killed and 407 others injured in Armenian attacks that target residential areas.

Some 3,064 houses and 100 multi-unit residential buildings have been destroyed, while 504 civilian facilities have been partially damaged.

The Armenian Defense Ministry said Monday it had recorded another 44 casualties among its military, pushing the death toll among its troops to 1,221 since fighting with Azerbaijan erupted in late September.

Over the past six weeks, the Azerbaijani army has liberated five cities, three towns, nearly 240 villages and some strategic heights from Armenian occupation.

About 20% of Azerbaijan's territory, including Nagorno-Karabakh and seven adjacent regions, has been under Armenian control for nearly three decades.