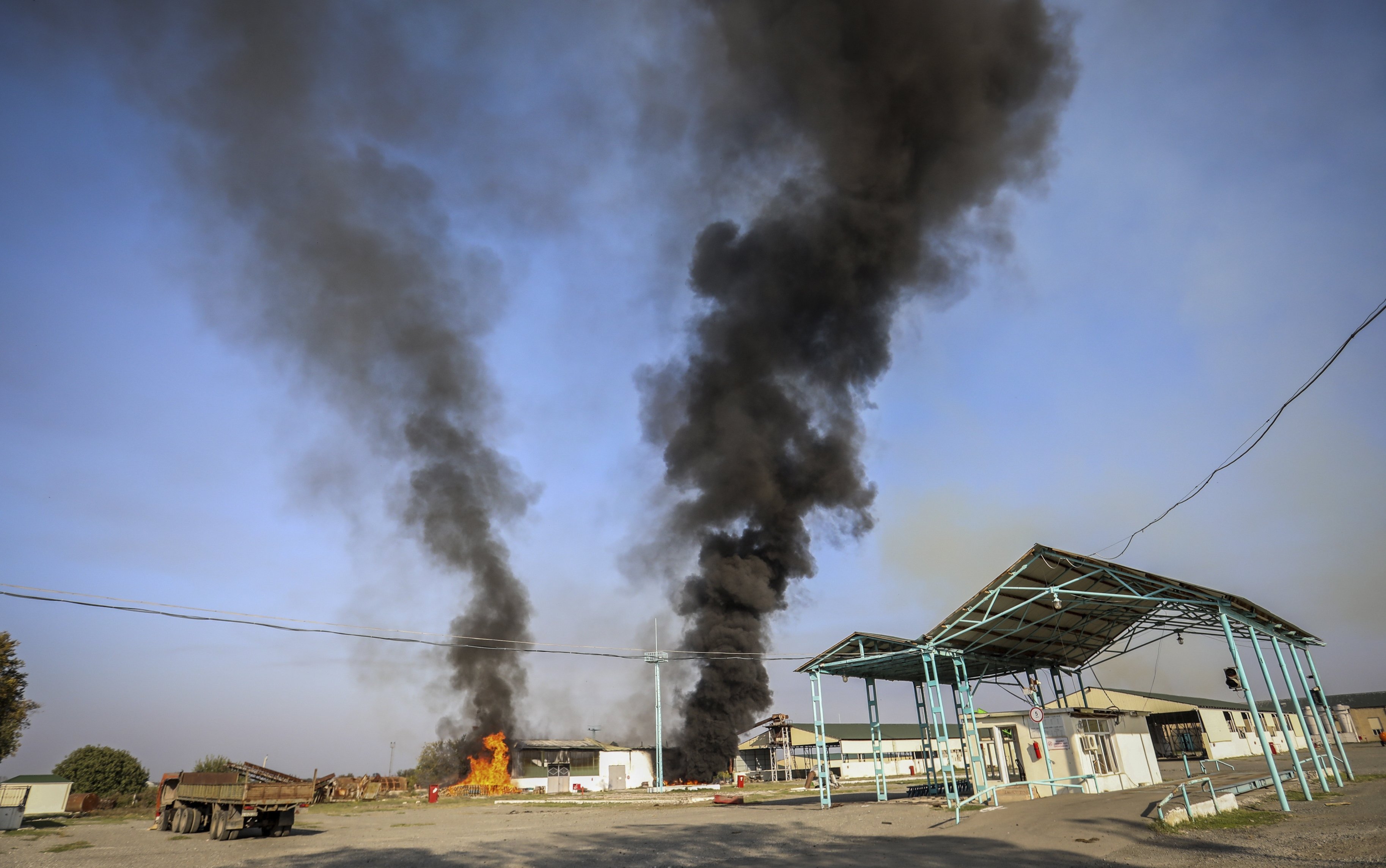 A view of a fire in the territory of local factory following recent shelling during fighting over the occupied region of Nagorno-Karabakh, in Tartar, Azerbaijan, Oct. 19, 2020. (AP)
by DAILY SABAH WITH AGENCIES Oct 25, 2020 1:55 pm
RECOMMENDED

Azerbaijan accused Armenia of using child soldiers in the battle over the occupied Nagorno-Karabakh on Sunday, with pictures and footage proving the war crime.

"Video shows that #Armenia employs #childsoldiers. Needs to be investigated. Recruiting and using children under the age of 15 as soldiers is prohibited under international humanitarian law – treaty and custom – and is defined as a #warcrime by ICC," said Azerbaijani President Ilham Aliyev's foreign policy adviser, Hikmat Hajiyev, while sharing a video on his Twitter account.

Hajiyev also attached the accounts of the United Nations and International Committee of Red Cross (ICRC) to his tweet in order to alert them of the issue.

The 1949 Geneva Convention on the Protection of Civilian Persons in Time of War prohibits the use of children under the age of 15 as soldiers.

Back in 2005, Yerevan also declared that under Armenian law, citizens under 18 cannot be called on for military service, even if it is voluntary, which, as the footage shows, is not properly executed.

Since the recent eruption of violence, it's been claimed multiple times that Armenia is receiving support from YPG/PKK terrorists, a group known for its intense youth recruitment activities. The YPG's use of child soldiers in its ranks has repeatedly been documented and criticized by international human rights organizations, including Amnesty International and Human Rights Watch.

Armenia is also using civilian airplanes, Hajiyev expressed at the meeting. He said this is "against the rules of the International Civil Aviation Organization. They have attached missile systems to civilian airplanes. In addition, weapons and missiles are being sent in the name of 'humanitarian aid.'" Hajiyev also noted that Armenia was carrying arms on its official airplane as on a formal visit. "They kill Azerbaijani civilians with them. This also needs to be examined by the international media," he said.

Nagorno-Karabakh lies within Azerbaijan but has been under the control of Armenian separatists, backed by Yerevan, since the war ended in 1994. The current fighting that started on Sept. 27 marks the biggest escalation in the conflict since then. Last week, Armenian Prime Minister Nikol Pashinian urged citizens to sign up as military volunteers to protect their country and claimed that "Azerbaijan's aggressive stance" in the clash over Nagorno-Karabakh leaves no room for diplomacy.

In a live video address on Facebook, Pashinian said all Armenians must "take up arms and defend the motherland" and urged local mayors to organize volunteer units. He charged that Azerbaijan's "uncompromising posture" has shattered hopes for a political settlement.

"There is no way now to settle the Nagorno-Karabakh issue through diplomacy," Pashinian said. "In this situation, we may consider all hopes, proposals and ideas about the need to find a diplomatic settlement effectively terminated," he added.

Hajiyev immediately slammed Pashinian's call to arms, saying the statement reflects Armenia's lack of interest in a diplomatic solution and disrespects the efforts of international mediators.

As Armenia's illegal activities start to gradually be revealed, clashes continued over the weekend despite the cease-fire efforts, with Armenia targeting civilian settlements in the Aghdam, Tartar and Agjabedi regions.

Azerbaijan's military, on the other hand, advised on Saturday that the civilian populations living in settlements close to combat operations zone should to stay away from military installations in order to avoid any potential harm.

In a statement, the Azerbaijani Defense Ministry said that Armenian soldiers and volunteers were deceived by Yerevan's leadership, asking them to lay down their arms and surrender.

"All the rights of prisoners of war and civilians will be protected in accordance with International Humanitarian Law, and through international organizations, the necessary conditions will be created for persons wishing to move to third countries," the statement added.

In a separate release, the Defense Ministry said the Azerbaijani military repulsed an attack by Armenian forces on the Syunik-Zangilan road.

"The enemy faced fierce resistance from our units was forced to retreat. There are prisoners captured from enemy forces," it added.

In a combat operation conducted on Saturday, Azerbaijani Air Forces destroyed three tanks, two shelters and four strongholds of the Armenian militia in the Aghdara and Aghdam directions of the front, the Defense Ministry said.

A similar statement, also released on Sunday, expressed that the Azerbaijani army has continued its military operations to liberate the occupied territories for nearly 30 years.

In the notice, the ministry said the country's forces carried out offensives of varying intensity in the regions of Aghdara, Khojavend, Fuzuli, Hadrut, Qubadli and Lachin throughout the night.

Armenian forces opened fire with tanks, artillery and mortars, while the Azerbaijani army continued activities in the main directions in accordance with its operational plans, expanding the areas under their control, the statement added.

The Armenian troops in Qubadli withdrew with manpower and equipment losses. Many of the soldiers sent from the Tsaghkadzor region in Armenia to Nagorno-Karabakh were killed, it said.

According to the statement, the Azerbaijani army destroyed two tanks, two armored vehicles, four D-30 howitzers, one 2A36 Giatsint-B gun and seven cars belonging to the Armenian forces in different locations on the front.

The weekend's clashes in and around Nagorno-Karabakh came after U.S. Secretary of State Mike Pompeo hosted the foreign ministers of both countries in a new peace push on Friday.

The collapse of two Russia-brokered cease-fires by the subsequent Armenian attacks on civilian settlements had already dimmed the prospect of a quick end to the fighting.

Still, in an attempt to boost hopes for yet another cease-fire, Pompeo met separately Friday with his counterparts from Armenia and Azerbaijan, urging them to "end the violence and protect civilians."

The United States has said it is neutral but Pompeo has criticized Turkey and in a recent interview described Armenia's actions as defensive. This biased stance of the country has led the meeting to go nowhere and as the cease-fire hopes were removed from the table once again.

World powers, including Russia, France and the U.S., have called for a new cease-fire multiple times. Turkey, meanwhile, has supported Baku's right to self-defense and demanded the withdrawal of Armenia's occupying forces.