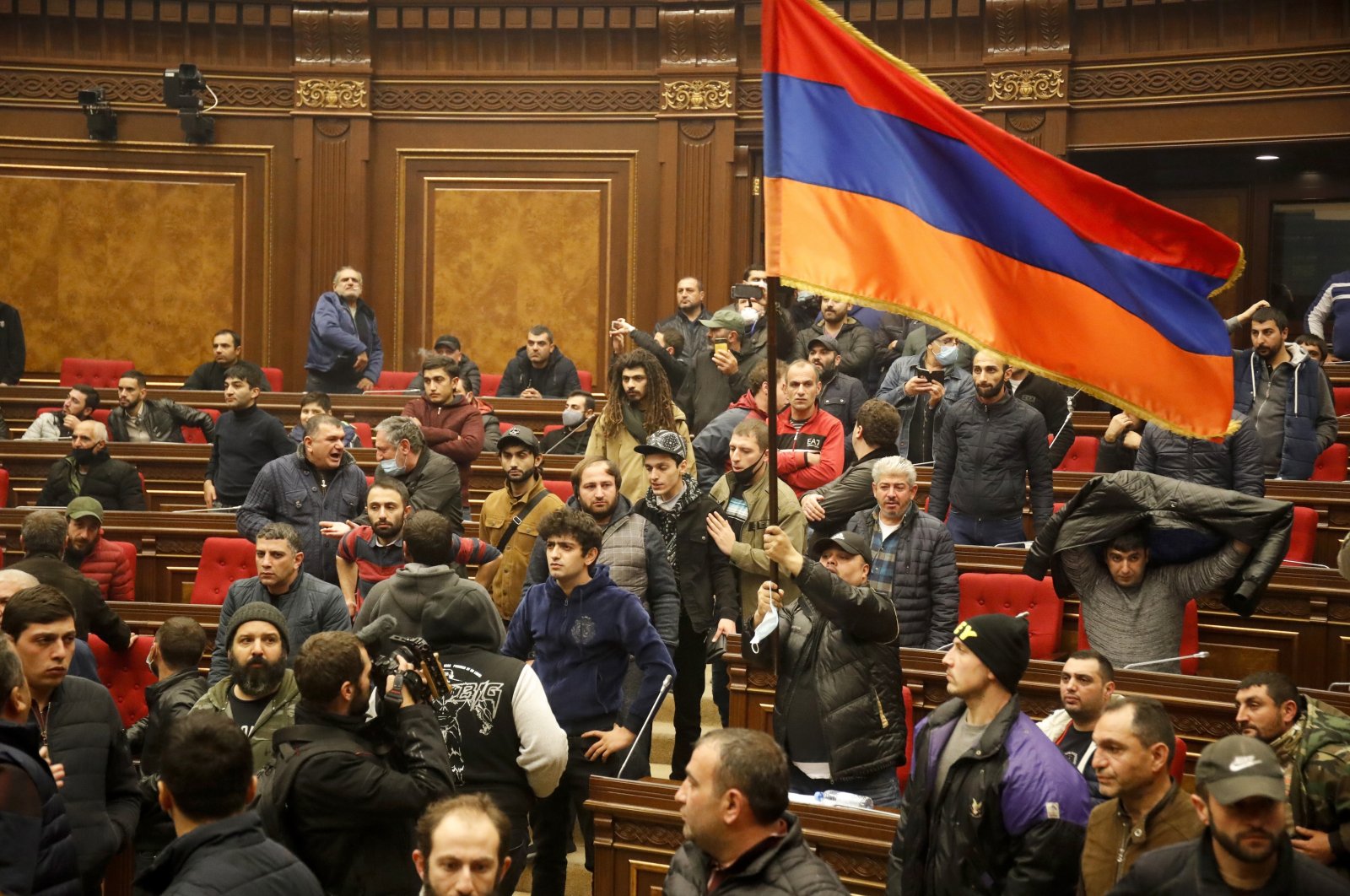 Demonstrators wave an Armenian flag in protest against a peace deal over the Nagorno-Karabakh region, at the national parliament building in Yerevan, Armenia, Tuesday, Nov. 10, 2020. (AP Photo)
by Daily Sabah with Agencies Nov 10, 2020 11:53 am
RECOMMENDED

Armenian President Armen Sarkissian said he was not involved in the process of signing a peace deal between Armenia and Azerbaijan that ended the decadeslong Nagorno-Karabakh crisis.

Sarkissian said he learned about the deal over the news and that he had not been consulted before Prime Minister Nikol Pashinian "painfully" agreed to sign the deal.

The Armenian president said the decision should have been made after a period of consultation and debate, as the issue is extremely important for the country.

Pashinian in a statement posted on his Facebook page on Tuesday said, "I have signed a statement with the presidents of Russia and Azerbaijan on the termination of the Karabakh war." He said the move was "unspeakably painful for me personally and for our people."

The agreement sparked outrage in Armenia, with angry protesters storming government buildings in the capital Yerevan where they ransacked offices and broke windows.

Crowds entered parliament and demanded the resignation of Pashinian, while they assaulted the parliament speaker.

The recent capture of Shusha was a major victory for the Azerbaijani forces, who have been making steady gains against Armenian separatist fighters since new fighting erupted over Nagorno-Karabakh a month ago.

The town has significant military importance because of its strategic location of about 10 kilometers (6 miles) south of the region's capital near Khankendi (Stepanakert) and on the road linking the city with Armenian territory.

A ministry statement late Sunday said the Armenian army suffered "heavy losses" and fled their position on the front line.

Since fighting restarted on Sept. 27, at least 93 Azerbaijani civilians have been killed in Armenian attacks that target residential areas, leaving 407 others injured.

Some 3,064 houses and 100 multiunit residential buildings have been destroyed, while 504 civilian facilities have been partially damaged.