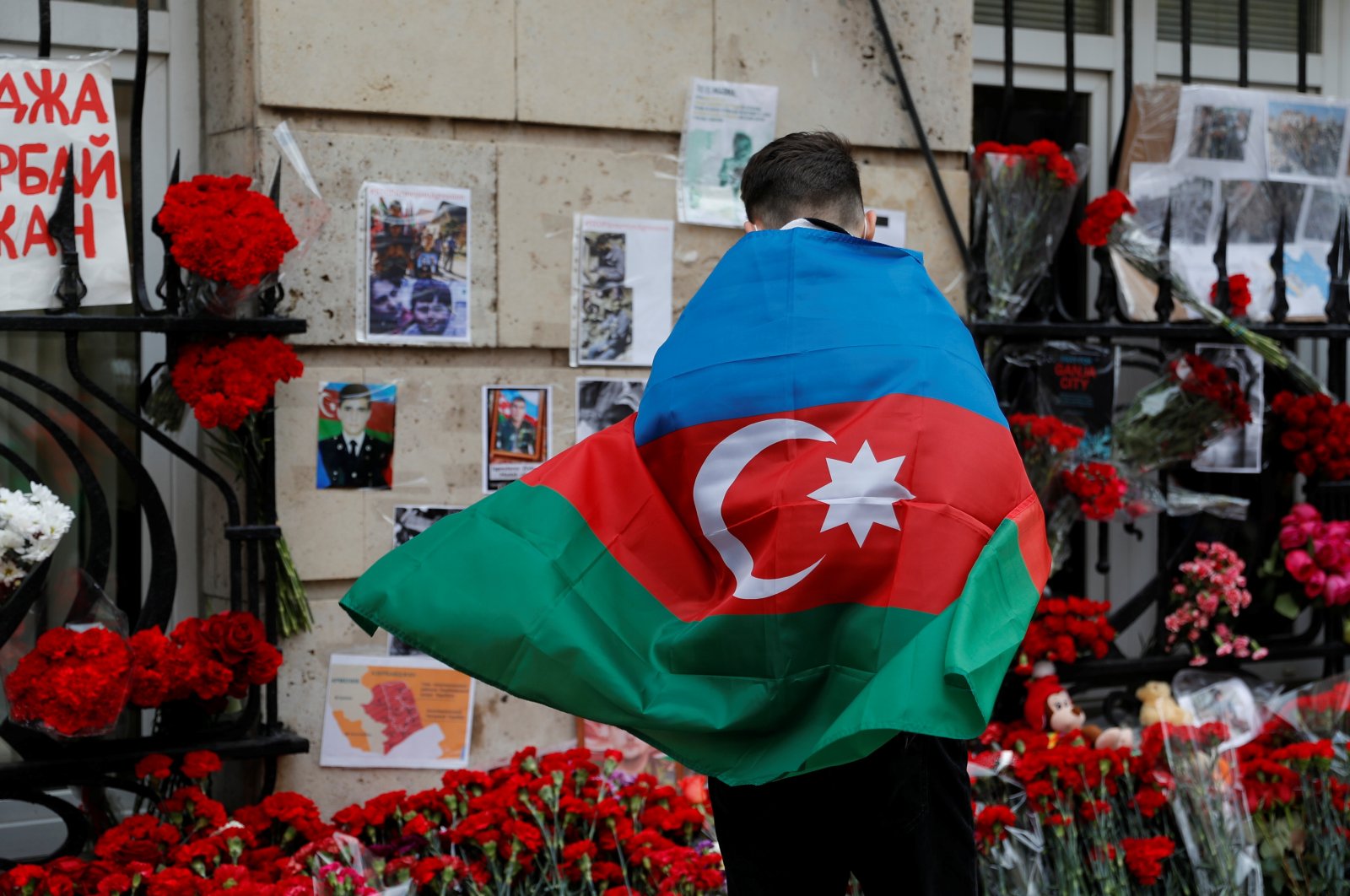 A man holding the national flag of Azerbaijan stands next to a makeshift memorial for people killed in the country during the military conflict over the occupied region of Nagorno-Karabakh, outside the Embassy of Azerbaijan in Moscow, Oct. 19, 2020. (Reuters Photo)
by DAILY SABAH WITH AGENCIES
Oct 21, 2020 11:07 am

As the conflict enters its 25th day, the death toll of Azerbaijani civilians reached 63 as Armenian attacks continue to target civilian settlements both near the frontline in occupied Nagorno-Karabakh and elsewhere in the country.

While injuring 292 others, the attacks also caused heavy material damage in the region as 1,981 houses, 90 buildings and 386 public buildings have become unusable.

The Armenian attacks have not been left unresponded to as Azerbaijan has also caused heavy blows to the Armenian Army. On Tuesday, an Armenian battalion of 400 soldiers was nearly wiped out, the Azerbaijani defense ministry announced.

"On October 21, from 12:55 to 13:30 [0855-0930GMT], Azerbaijan Air Defense Units determined and destroyed three more tactical unmanned aerial vehicles (UAVs) of the Armenian armed forces," the ministry said in a statement.

"The two UAVs were destroyed in the Fizuli direction, and one in the Terter [Tartar] direction of the front," it added.

In an earlier statement, the ministry said: "On October 21, at about 12:00 [0800GMT], Azerbaijan Air Defense Units destroyed another UAV of the Armenian armed forces in the Horadiz direction."

The forces had also destroyed two Armenian drones on Tuesday, which were taken down in two different locations, according to the ministry.

The first UAV was destroyed in the direction of Ganja city, while the second was downed over the village of Tapgaragoyunlu in the Goranboy region, the ministry said in two separate statements.

Armenia and Azerbaijan agreed to a new cease-fire, which was supposed to have taken effect last week. However, it again failed to hold for even 24 hours as Yerevan engaged in renewed violations.

Over the past 10 days, Armenia has violated two humanitarian cease-fires in Nagorno-Karabakh.

Meanwhile, as the clashes resume, Armenian President Armen Sarkissian left for Brussels to discuss the conflict with NATO and European Union officials, his office said on Wednesday.

Armenia expects NATO and EU leaders to do "everything possible" to stop the fighting and to "bring to life" a cease-fire deal, it said.

Four resolutions from the U.N. Security Council (UNSC) and two from the U.N. General Assembly (UNGA), as well as international organizations, demand the “immediate complete and unconditional withdrawal of the occupying forces” from occupied Azerbaijani territory.

World powers, including Russia, France and the U.S., have called for a new cease-fire. Turkey, meanwhile, has supported Baku's right to self-defense and demanded the withdrawal of Armenia's occupying forces.

Russian President Vladimir Putin and French counterpart Emmanuel Macron discussed the situation in Nagorno-Karabakh during a phone call, their offices said in statements on Tuesday.

The two leaders said they agreed that the two South Caucasian countries should relaunch “substantial negotiations,” the Elysee said.

Following the statements from Putin and Macron, on Wednesday, Russian Foreign Minister Sergey Lavrov held two separate meetings with his Armenian and Azerbaijani counterparts in Moscow to discuss the implementation of a cease-fire.

"During the talks, urgent issues related to the implementation of previously reached agreements on a cease-fire in the Nagorno-Karabakh conflict zone and the creation of conditions for its sustainable settlement were discussed," the Rssian foreign ministry said in a statement, following Lavrov's meeting with Zohrab Mnatsakanyan and Jeyhun Bayramov.

Armenia and Azerbaijan also said Tuesday their foreign ministers would meet U.S. Secretary of State Mike Pompeo in Washington on Friday in efforts to end the fighting.