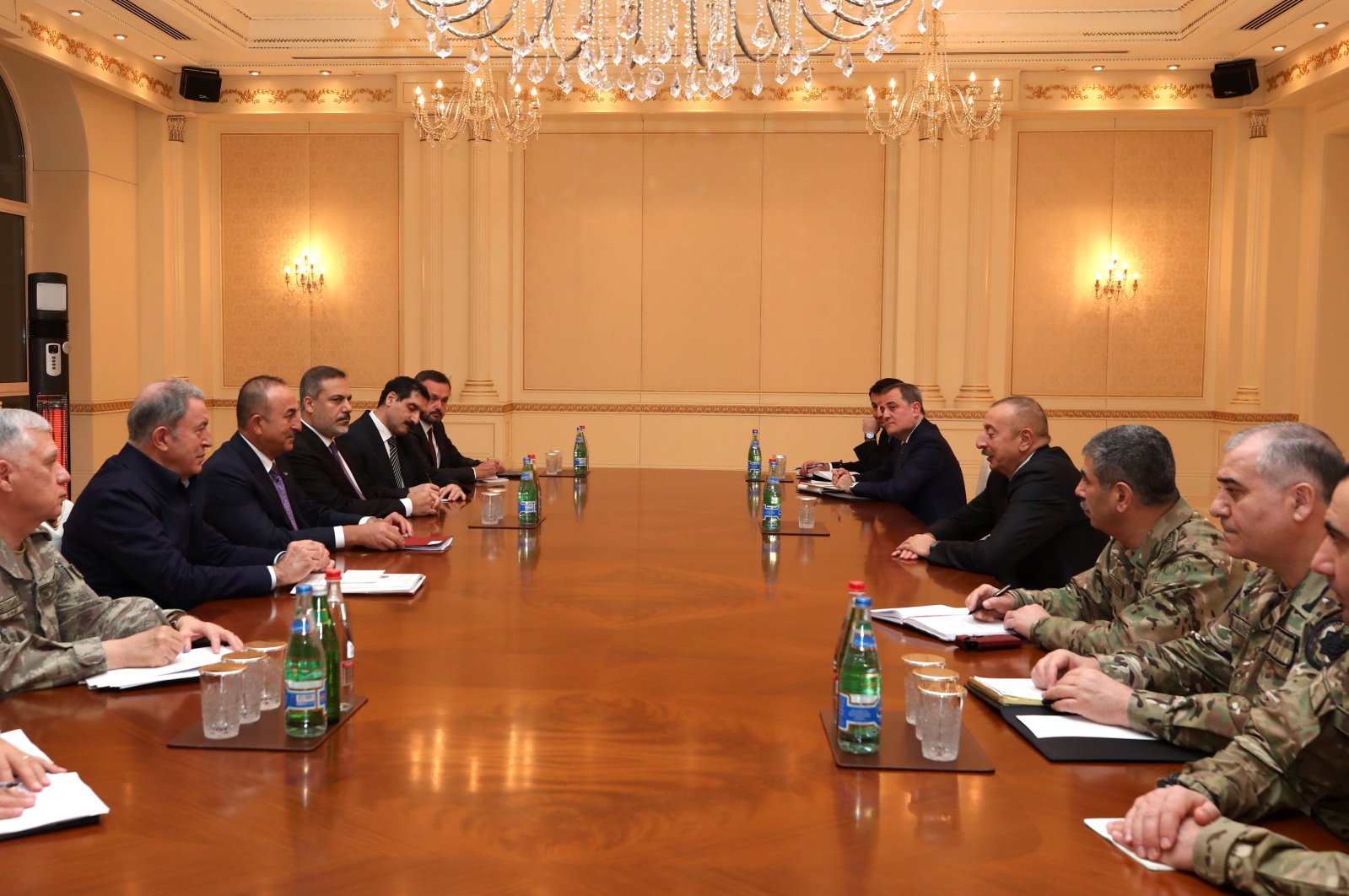 Azerbaijan had always emphasized Turkey’s equal role as a mediator in the Nagorno-Karabakh conflict and has successfully achieved this goal, Azerbaijani President Ilham Aliyev said during a meeting with top Turkish officials Tuesday.

Noting that the meeting was the first after Azerbaijan's victory in Nagorno-Karabakh, Aliyev thanked Turkey for its support.

"For all these 44 days (of operations), we have always felt the support of brotherly Turkey – all the people of Azerbaijan have. The broadcasts of Turkish television channels after the statement was signed yesterday were very heartwarming. Our Turkish brothers rejoiced in this victory as in their own victory," he said.

Noting the matter of a joint cease-fire monitoring center that will be manned by Turkey and Russia was discussed in a phone call between him and President Recep Tayyip Erdoğan, Aliyev said they have always wanted Turkey and Russia to play an equal role in the dispute and this goal was eventually achieved.

Speaking at the reception, Çavuşoğlu congratulated Aliyev on behalf of Erdoğan, himself and the Turkish nation.

"Your victory is our victory. The Azerbaijani armed forces under your command demonstrated to both friends and foes what it is capable of," he said.

Çavuşoğlu said future steps including the formation of the joint monitoring center will be discussed and evaluated between the Turkish delegation and its Azerbaijani counterpart.

Akar visited Azerbaijan's Defense Ministry in the capital Baku and hailed the liberation of territories from the Armenian occupation.

Welcomed by his Azerbaijani counterpart Gen. Zakir Hasanov, Akar attended a ceremony held for the Azerbaijani army's successes against Armenian occupying forces in Nagorno-Karabakh, an internationally recognized territory of Azerbaijan.

"The present situation is very pleasing for us. This operation is an awakening ... Azerbaijani army has shown its power to the whole world," Akar said.

He said the relationship between Turkey and Azerbaijan will last forever as "two states, one nation." Both Azerbaijan and Turkey are Turkic nations and share deep political, historical and cultural relations.

The heroism and courage Azerbaijani forces showed during the 44 days of the operation is worth being told for 44 years, the defense minister said.

Russian President Vladimir Putin announced early Tuesday that the two former Soviet republics of Azerbaijan and Armenia had signed a deal to end the conflict in Nagorno-Karabakh.

Aliyev hailed the agreement as a victory for his country, saying Baku's military success has enabled it to gain an upper hand to end the three-decade occupation of its territory.

Relations between Azerbaijan and Armenia over Nagorno-Karabakh have remained tense since 1991, but fresh clashes broke out on Sept. 27.

The agreement sparked outrage in Armenia, with angry protesters storming government buildings in the capital Yerevan where they ransacked offices and broke windows.

Crowds entered parliament and demanded the resignation of Armenian Prime Minister Nikol Pashinian, while they assaulted the parliament speaker.

The recent capture of Shusha was a major victory for Azerbaijani forces, who have been making steady gains against Armenian separatist fighters since new fighting erupted over Nagorno-Karabakh a month ago.

The town has significant military importance because of its strategic location of about 10 kilometers (6 miles) south of the region's capital near Khankendi (Stepanakert) and on the road linking the city with Armenian territory.