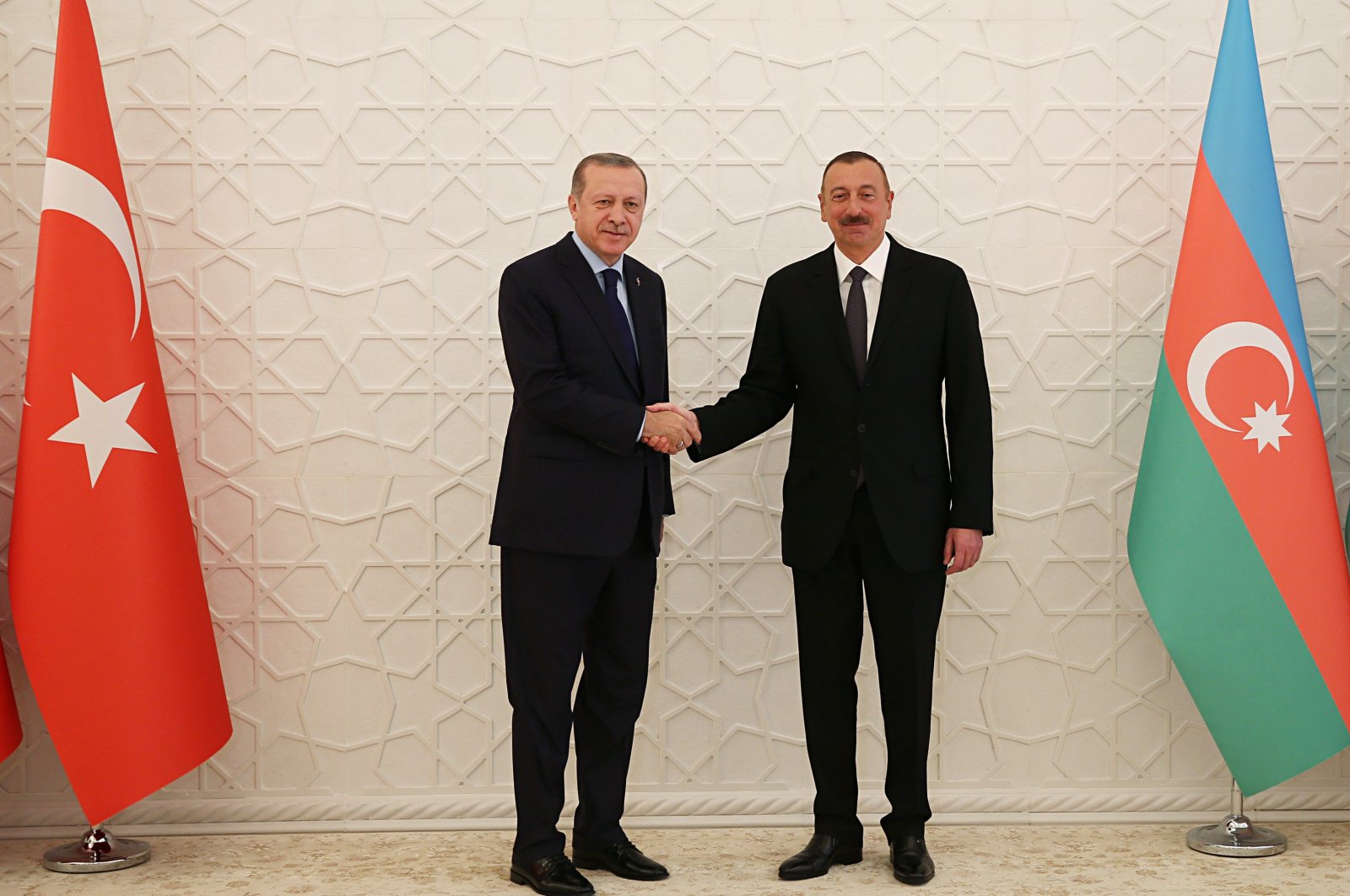 The "brotherhood and friendship" between Azerbaijan and Turkey is an example for the entire world, Azerbaijani President Ilham Aliyev said Tuesday.

In a letter to President Recep Tayyip Erdoğan, Aliyev marked the 102nd anniversary of the capital Baku's liberation from Armenian and Bolshevik occupation and hailed the role of the Caucasian Islamic Army under the leadership of Nuri Pasha (Killigil), who, along with the Azerbaijani National Army and volunteer forces, liberated the city, according to a written statement from the Azerbaijani presidency.

"Despite the difficulties of that period, brotherly Turkey did not spare its help from Azerbaijan," Aliyev said, adding that the nation would always remember those who lost their lives in these battles.

Noting that Sept.15 is "a very significant day" for the people of Azerbaijan, Aliyev said the "historic victory" was met with great enthusiasm by the people of Baku in 1918.

"Two years ago, that enthusiasm and love were revived in the streets of Baku," he said, referring to a joint military parade held with the participation of Azerbaijani and Turkish troops marking the 100th anniversary of the city's liberation.

Aliyev also thanked Erdoğan for Ankara's support for Baku amid escalated tensions on the Armenian-Azerbaijani frontier in July, adding that Azerbaijan had also always stood by Turkey and demonstrated its unwavering support in all matters.

The Armenian army violated a cease-fire on July 12 and attacked Azerbaijani border positions in the northwestern Tovuz district with artillery fire but later withdrew after suffering heavy losses following retaliation from the Azerbaijani army.

At least 12 Azerbaijani soldiers, including high-ranking officers, were killed and four troops were wounded in cross-border attacks by the Armenian forces.

"The Azerbaijan-Turkey strategic alliance and partnership is an important factor in ensuring peace and security in the region and contributing to the development of cooperation," he said.

Later in the day, the two leaders also held a phone conversation. Erdoğan congratulated the people of Azerbaijan and Aliyev on the occasion, underlining unity, solidarity and cooperation between Turkey and Azerbaijan.

The friendly political, legal, commercial and military relations between Azerbaijan and Turkey were documented shortly after the foundation of the Azerbaijani Democratic Republic on May 28, 1918, with the Treaty of Batumi, signed between the newly established country and then-Ottoman Empire on June 4, 1918. With the treaty, the empire recognized the independence of Azerbaijan, which could, in turn, request the empire's military help in case of any threat.

After the republic proclaimed independence in Georgia, Fatali Khan Khoyski, Azerbaijan's first prime minister, formed the government in Ganja, now northwestern Azerbaijan, in June as he was not able to travel directly to Azerbaijan's current capital Baku as the city was then controlled by Armenian militants and Bolsheviks.

On Sept. 15, 1918, an elite Ottoman force called the Caucasian Islamic Army under the leadership of the 29-year-old Killigil was sent by then-Minister of War Enver Pasha to what is today Azerbaijan in the closing months of World War I in response to a plea from the region's people.

The Caucasian Islamic Army, made up of Azerbaijani and Turkish soldiers, completed its mission in September, liberating Baku and thus laying the groundwork for the country's independence decades later in 1991. The liberation of Baku at the time paved the way for the transfer of the capital from Ganja and ensured the territorial integrity of Azerbaijan, providing the basis for its modern-day boundaries.

Meanwhile, an Azerbaijani political party Tuesday offered that a bloc similar to the European Union should be formed for Turkic countries.

In a meeting in the capital Baku, Sabir Rustamkhanli, a lawmaker and head of the Civic Solidarity Party (VHP), along with the leaders of other political parties, discussed the political situation in the region and the future of relations with Turkey.

Rustamkhanli said that a century ago, on the eve of the foundation of the Azerbaijani and Turkish republics, political realities did not allow the states to realize the "dream of ideological salvation," adding that today the opportunities are wider despite tougher global geopolitical conditions.

"Now it is necessary to learn from the past, to choose the right way of development to avoid new mistakes," he said.

He also stressed that a motto of "Turkic unity" should be implemented alongside Turkey and Azerbaijan's longstanding "one nation, two states" maxim.