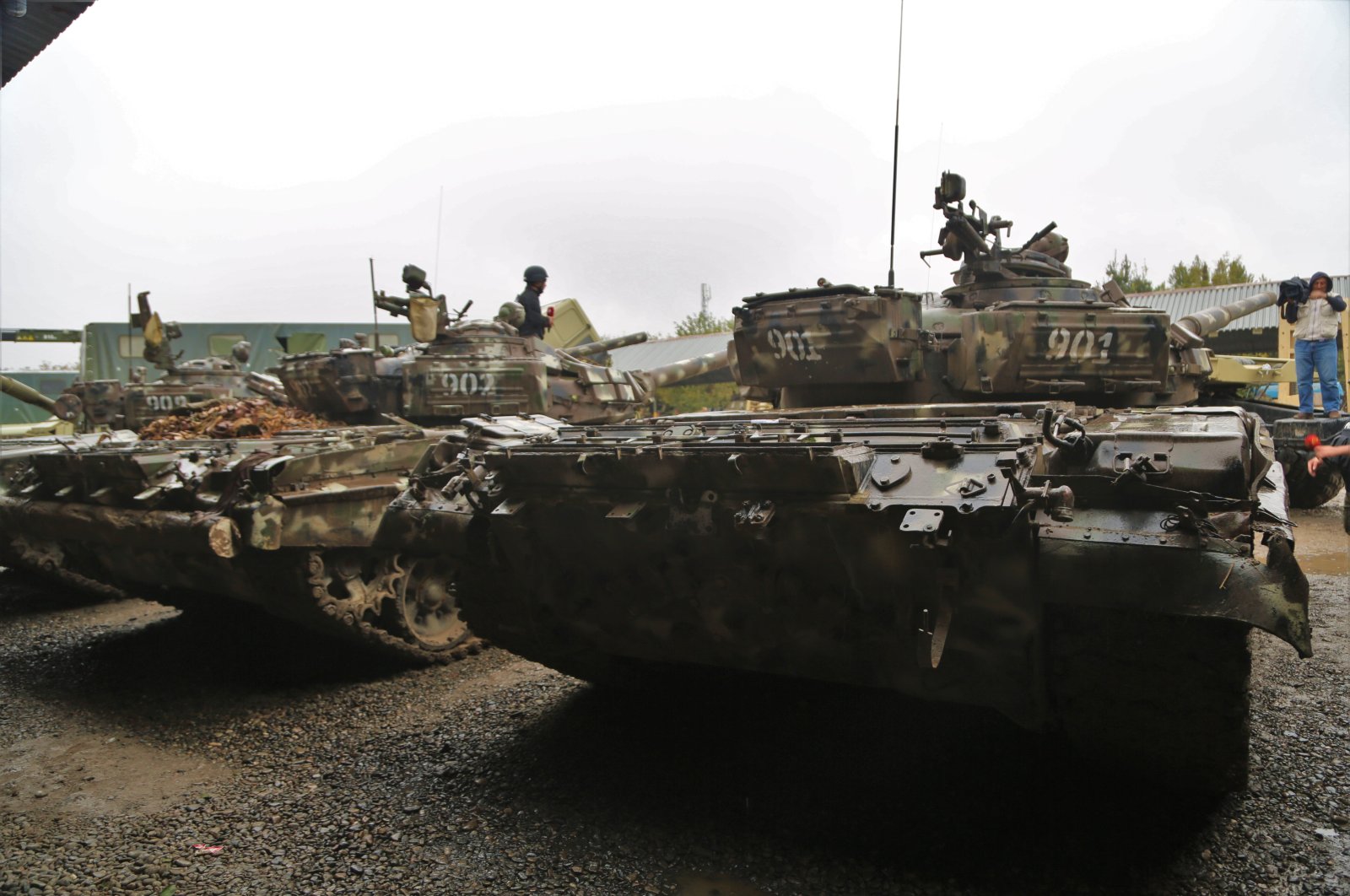 Azerbaijan's army seized T-72 tanks from the Armenian military during the clashes over the occupied Nagorno-Karabakh region, Oct. 6, 2020. (AA Photo)
by DAILY SABAH WITH AA Oct 07, 2020 11:16 am
RECOMMENDED

Azerbaijani troops continued to inflict heavy blows on the Armenian military amid ongoing border clashes between the two countries in the conflict over the Armenian-occupied Nagorno-Karabakh region.

It added that the Azerbaijani Armed Forces continued combat operations in various directions of the front to expand its achievements from the last few days.

The Armenian Army opened fire on the villages of Tartar, Barda, Aghdam, Agjabedi, Fuzuli and Jabrayil in the morning, and the Azerbaijani military gave the necessary response, according to another ministry statement.

Separatist Armenian groups in the region said Wednesday they had recorded another 40 casualties among its military, pushing the military death toll to 280 since fighting with Azerbaijani forces erupted on Sept. 27.

Azerbaijani prosecutors said Armenian forces carried out the attack, which was prevented by the Azerbaijani army, on the pipeline in Yevlah at around 9 p.m. local time (5 a.m. GMT).

"Armenia has fired a cluster rocket at the Baku-Tbilisi-Ceyhan (BTC) pipeline. In the vicinity of the Yevlakh region, a rocket landed 10 meters (11 yards) away from the pipeline," Azerbaijani President Ilham Aliyev's aide Hikmet Hajivev said in a tweet late Tuesday as local media reported that a resident of the Goranboy district had been killed due to the explosion of the internationally banned bomb.

"300+ cluster bomblets ejected around. No damage to the pipeline. ANAMA is in operation," Hajiyev said, referring to the Azerbaijan National Agency for Mine Action.

He described the attack as "desperate attempts of Armenia to attack energy infrastructure."

“We would like to note that these bombs were included in the class of prohibited ammunition in 2008 in line with the Convention on Cluster Ammunition (CCM),” ANAMA was quoted saying on the news site.

The BTC pipeline delivers Azerbaijani light crude oil through Georgia to Turkey's Mediterranean port of Ceyhan for export via tankers.

Azerbaijan described the attack as a "terrorist act" and highlighted the pipeline's important role in Europe's energy security.

The Organization for Security and Co-operation in Europe (OSCE) Minsk Group, co-chaired by France, Russia and the U.S., was formed in 1992 to find a peaceful solution to the conflict but to no avail. However, a cease-fire was reached in 1994.

Many world powers, including Russia, France and the U.S., have called for an immediate cease-fire. Turkey, meanwhile, has supported Baku's right to self-defense.

Most recently, Russian leader Vladimir Putin on Wednesday reiterated his call for the fighting to stop, calling the events a tragedy and expressing Moscow's concern.

Russia does not have an obligation to defend Armenia, as its conflict with Azerbaijan is not being waged in Armenian territory, Putin also said.

Russia's TASS news agency also said Azerbaijani President Aliyev had spoken with Putin over the phone to discuss the latest developments in the region.