Cease-fire on for 4th time in Idlib; what’s next? 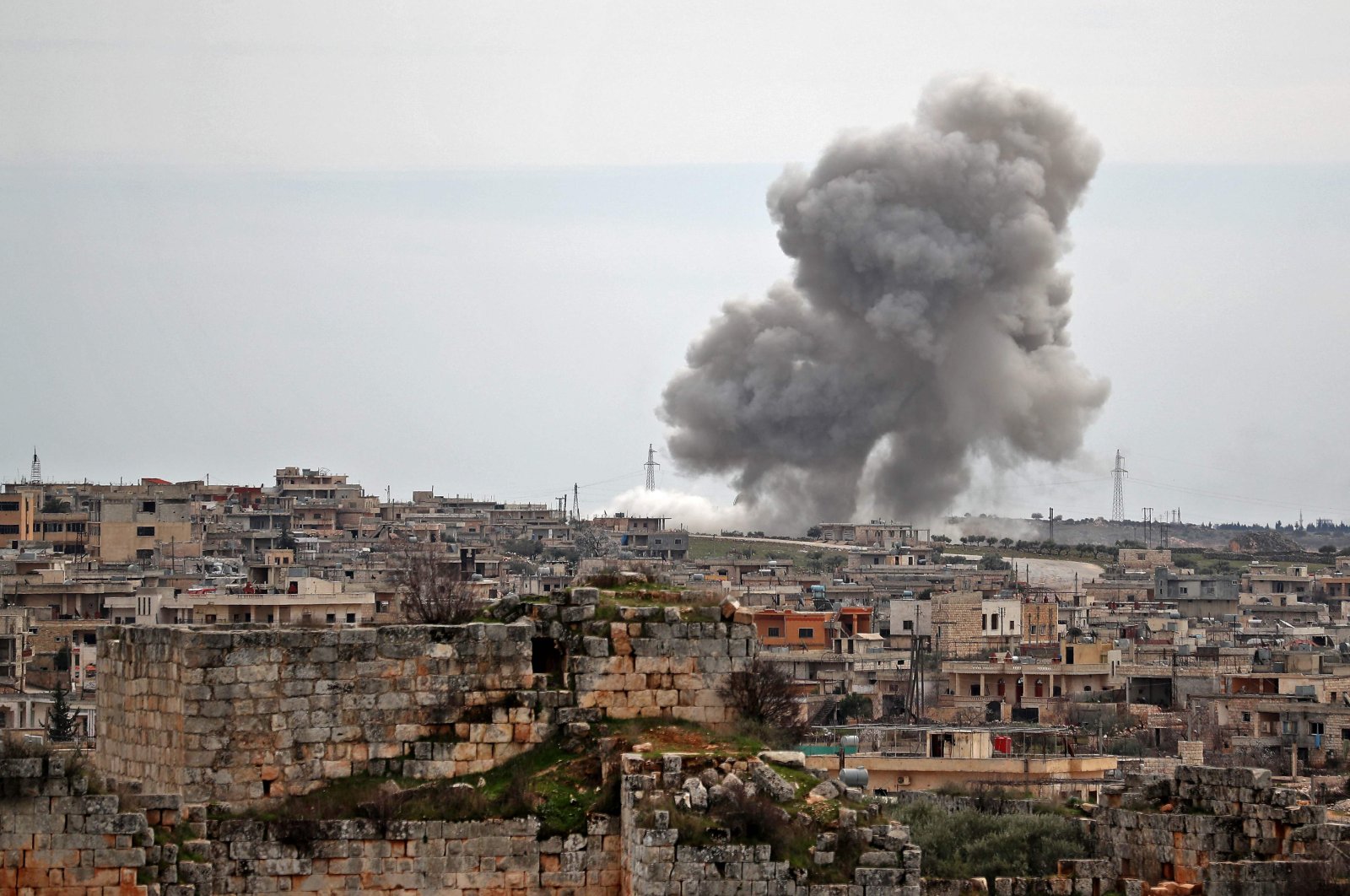 The deal signed between Turkey and Russia eased the tension in Idlib by declaring a cease-fire once again. Yet, despite the positive intentions of both parties, the unreliable nature of the Syrian regime raises cautiousness while increasing the responsibility on the shoulders of the Turkish and Russian sides as guarantor states

Turkey and Russia sat down for talks on Thursday, a scene that has gradually become routine for both sides over the course of the nine-year Syrian civil war. The topic of discussion was Syria yet again, particularly the escalation of tension by the Bashar Assad regime in northwestern Idlib province. The meeting concluded with an agreement, in accordance with the long-lasting cooperation between the two countries. This highlights that the leadership diplomacy between the two leaders, President Recep Tayyip Erdoğan and his Russian counterpart Vladimir Putin continues to work even in the face of the harshest conditions and biggest disagreements.

The outcome was also a familiar one for the war-torn province, in which a cease-fire has been declared for the fourth time. The previous ones collapsed due to the regime’s violations. According to experts, the premise of a cease-fire is promising. However, since the regime has proved itself to be an unreliable actor more than once, the two guarantor countries, Turkey and Russia, should stay vigilant from now on, with an aim to avoid possible after-effects that would put the bilateral ties at risk, as well as Syrian lives.

“Before the meeting, both sides had maximalist demands. They wanted to have everything in their interests; however, it was not possible. Therefore, they had to compromise; in the end, there are no sole victories for either side,” said Hüseyin Alptekin, a researcher at the Foundation for Political, Economic and Social Research (SETA), underlining that there is only one group that had the absolute victory in the end: the civilians of the region.

“Idlib is like a 'no man’s land;' there are many opposition groups in the region but no state to administrate it,” Alptekin said. “Now,” he added, “with this deal, Turkey and Russia are stepping into the region to take over the control.”

Erdoğan and Putin met in Moscow on Thursday and reached an agreement over a cease-fire in northern Syria. The meeting came amid growing tension in northern Syria’s Idlib province, where the Russia-backed Bashar Assad regime's offense has targeted civilians and Turkish soldiers, raising the prospect of a direct clash between Russian and Turkish forces.

The protocol call for parties to "cease all military actions along the line of contact in the Idlib de-escalation area starting from 00:01 of March 6, 2020."

A security corridor will be established 6 kilometers (3.7 miles) deep to the north and to the south from the M4 highway, according to the protocol.
"The specific parameters of the functioning of the security corridor will be agreed between the defense ministries of Turkey and Russia within seven days," it noted.
Joint Turkish-Russian patrols will begin on March 15 along the M4 highway from the settlement of Trumba – 2 kilometers (1.2 miles) to the west of Saraqib – to the settlement of Ain-Al-Havr, the protocol also said.

According to Eşref Yalınkılıçlı, a Eurasian expert based in Moscow, despite the deal, provocation in the region, especially by the Syrian regime and other militia groups, is likely to continue.

“Turkey’s initial intention while going to the meeting was to go back to the Sochi deal and reestablish its terms in the field,” Yalınkılıçlı said. ”However,” he indicated, “since the regime’s hand strengthened over the last year, such a demand could not have been possible.”

In Alptekin’s opinion, the Syrian regime has already proved itself as an unreliable actor.

“If the regime violates the deal once again, I believe Turkey’s actions will be harsher than ever. It would be a foolish move for the regime to break the cease-fire,” he said.

Speaking in a joint press conference after the meeting, Erdoğan said the Syrian regime and its aggressiveness are the main reasons behind civilian suffering in Idlib.

“Considering all the recent developments, a new status quo is inevitable in Idlib,” he added.

“We have deployed additional military units to Syria to ensure regional stability. Our priority is to enable de-escalation in Idlib. The cease-fire in Idlib will begin tonight a minute after midnight,” he also said.

Putin, on the other hand, said: “We have always solved our problems by working together. Today was no different.”

“In my opinion,” Yalınkılıçlı said, “the side that was demanding a cease-fire the most was Russia. Despite initially blaming Turkey for the rising escalation – as Turkey showed its determination in the region, Russia realized the seriousness of the situation and wanted to have a meeting with Turkey.”

Yalınkılıçlı added: “We are already engaged in the field. We have been losing our soldiers. We already host almost 4 million Syrian refugees. So, what worse can happen to Turkey? The one with things to lose was Russia.”

“Russia would not like to confront Turkey,” Alptekin said. “So far, no matter how much the tension in the region escalated, they did not interfere as Russian forces (did not want to stand) against the Turkish army, even when their equipment was being damaged. Because any war in Syria would be one with no winners. A lose-lose game.”

Still, according to Yalınkılıçlı, Turkey has two soft spots in Syria.

“The first one is the inability to conduct an aerial military operation since the air space has been shut down by Russia. The second one is our soldiers in Idlib and their safety. The conditions of the safe corridor would be determined within a week, which would clarify the situation of the Turkish soldiers in the region. Turkey cannot conduct any operation unless it ensures the safety of its soldiers,” he emphasized.

Alptekin, on the other hand, said that from now on, a military conflict is not needed in the region as there is a safe zone alongside the M4 highway. “In my opinion, attention to the humanitarian aspect of the war is much more crucial now,” he stated.

However, the incident that acted as a tipping point in regional tension was the killing of more than 34 Turkish soldiers in regime attacks last month. In response, Ankara launched Operation Spring Shield against regime targets in Idlib.

Currently, Turkish soldiers are stationed in the region to protect the local population and counterterrorism groups. Still, despite the military escalation, Ankara also has been putting forth efforts to keep diplomatic channels active with Russia in hope of a finding political solution.

When it comes to humanitarian aspects, however, there are mixed views among the experts, based on mistrust of the Syrian regime’s actions.

“The deal puts Turkey in a tricky position when it comes to protecting the civilians in the region,” said Assad Hanna, a Syrian activist based in Istanbul.

“What if the regime violates the deal and attacks the civilians again?” Hanna questioned, underlining that civilians in the region have no option other than Turkey’s guardianship.

“It is Turkey’s duty to take care of the refugees as an Astana guarantor,” he said, while calling on the international community to share the burden at the same time.

In Hanna’s opinion, Thursday’s deal does not bring anything new to the table.

“The same deal was signed in Astana earlier too. It failed. So, it is not expected for this one to be long-lasting either. Eventually, the regime will start its attacks again, even if it happens after a brief period of de-escalation,” he said.

Despite the ongoing skepticism, according to Alptekin, there is no doubt about Turkey is acting as a guarantor for the civilians.

“Turkey is still the protector of the civilians in the region. With this deal, it showed its determination to guard the civilians,” Alptekin said.

The Syrian regime's attempt to take Idlib has forced close to a million civilians to flee their homes and prompted Erdoğan to open Turkey's border with Greece to refugees and migrants.

Turkey hosts some 3.6 million Syrian refugees and says it cannot handle more. Erdoğan warned Europe on Wednesday that it must support Turkey's "political and humanitarian solutions in Syria" if it wants to avoid a repeat of the 2015 migration crisis.

Yalınkılıçlı stated that although the refugee topic tops Turkey’s agenda, in Russia, the situation is the exact opposite.

“The situation of the refugees is highly overlooked in Russian media. Since there are no refugees or terrorists in Russia, they have no agenda on such topics,” he stated.

Instead, in Yalınkılıçlı’s terms, there is a “cautious optimism” in Russia.

“The Russian media approached the meeting with the perspective that 'at least there has been a concrete outcome.' They say that when Putin and Erdoğan come together, an outcome is achieved. They think that for now; they have minimized the tension and brought the ties to a level that can be pursued,” he said.

In Alptekin’s point of view, the meeting truly reflects a trend in modern diplomacy in the world, which puts the leaders at the center of international relations.

“In the world in general, we see the direct effect of strong leaders meeting to develop diplomatic ties. First, leaders sit down and decide on the general terms and then delegations come to determine the details,” he said.

The relationship has been strained in recent days, with the two sides trading accusations of violating the Sochi deal, which created a buffer zone and allowed for the deployment of 12 Turkish observation posts.

Expressing that both Erdoğan and Putin have years of experience in leadership, Alptekin said they are also good at understanding the dynamics of politics, which makes it easier to reach solutions to problems.