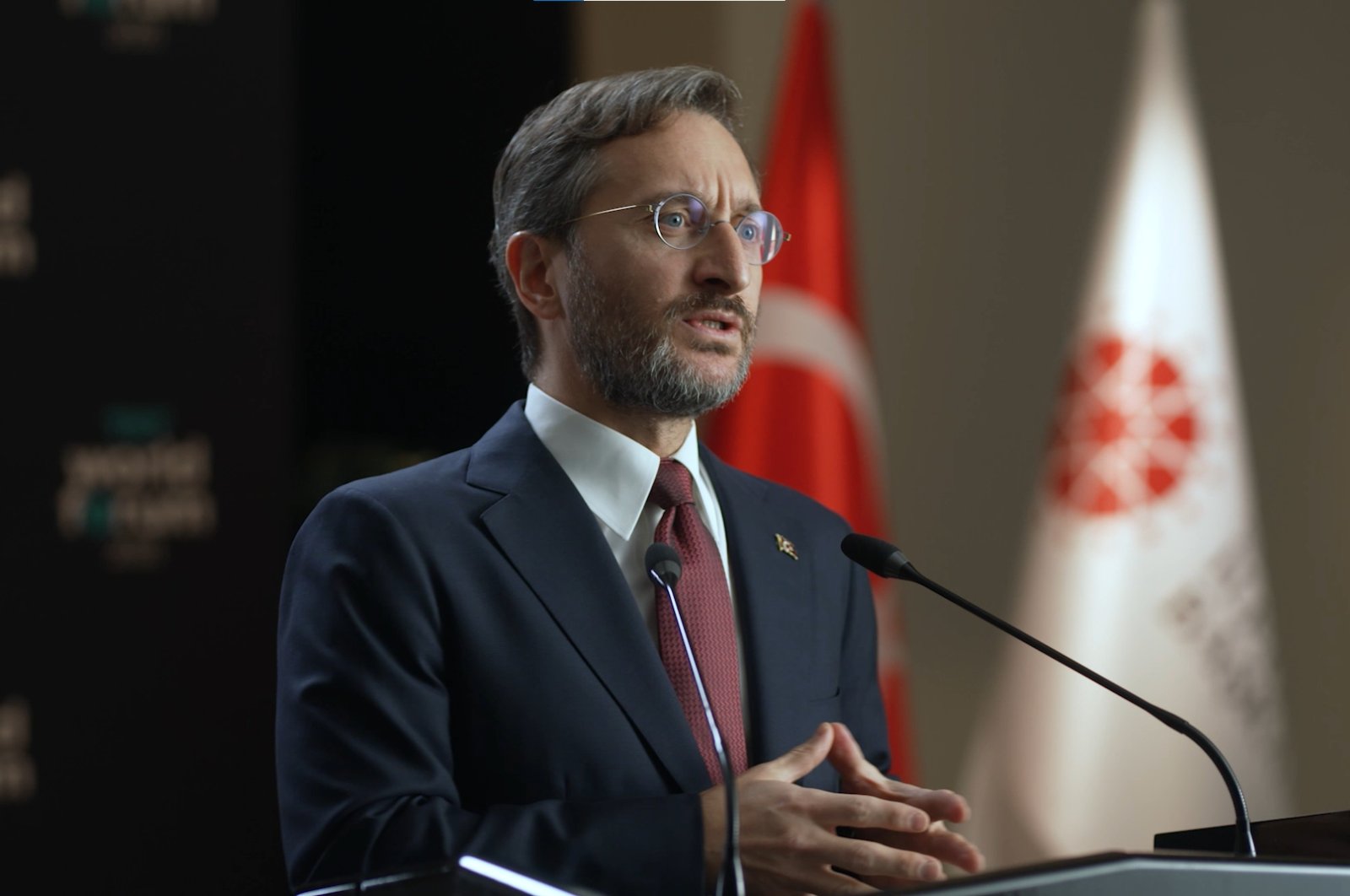 Presidential Communications Director Fahrettin Altun reached out to participants of the 5th TRT World Forum, being held with the theme “Power and Paradox: Understanding Grand Strategy in the 21st Century."

Altun stated in his speech that the COVID-19 crisis hit the world at the worst possible time since the end of the Cold War and in 2020, many international conflicts were left unresolved in different parts of the world.

Altun, underlining that this process makes it very difficult for nations to focus on forming long-term strategies and dealing with global threats, continued: “The lack of a reform process left international institutions weak and unprepared to handle major global crises. Not only the United Nations but also more specialized institutions including the World Health Organization proved to be unable to resolve a global crisis.”

Altun emphasized that the idea of international cooperation was at its lowest point when the pandemic struck, adding: “Every country preferred to act unilaterally, followed protectionism when it came to medical equipment and failed to develop a framework to respond collectively to the crisis. Furthermore, the COVID crisis also demonstrated that the existing inequalities in the world are a major threat not only to less-developed nations but all across the world. It was understood that without a fair distribution of resources and equipment, no one should expect to end the existing pandemic.”

Altun stated that the emergence of global crises in the last 20 years, from terrorism to humanitarian issues, from climate change to COVID-19, shows that all nations need a new approach in designing grand strategies.

Altun suggested that every nation may have different near-term and long-term objectives in their foreign policies; yet, the previous two decades demonstrate that nations should pay attention to regional and global crises more diligently while formulating their grand strategies and pointed out that long-lasting conflicts can create humanitarian challenges and economic and social problems for the region.

Underlining that organizations require urgent reform to deal with global issues from humanitarian disasters to global climate change in a more efficient manner, Altun explained that every country’s grand strategy necessitates a clause to help with reform and make these institutions more effective.

Altun highlighted that states must recognize that global problems require global solutions and the emergence of global crises demonstrates that without finding a global solution to these problems, it is impossible to attain the goal of stability and security.

Altun also said that Turkey has noted the challenges in the system and has taken steps to respond to these challenges.

“Under the leadership of our president, Recep Tayyip Erdogan, we have revised our foreign policy strategy to respond not only to our immediate security concerns but also to regional and global problems. We made the resolution of conflicts in our immediate neighborhood an important priority for our foreign policy. Turkish foreign policymakers have been involved in different initiatives to resolve the conflicts in Syria, Libya and Iraq. We have also invited affected parties to engage in dialogue and constructive diplomacy in other crisis areas, including the Eastern Mediterranean and the Azerbaijan-Armenia dispute. President Erdogan called on nations to form international conferences to negotiate and settle the disputes in these areas,” he said.

Saying that reform for the U.N. Security Council has long been called for, however, has yet to be achieved, Altun suggested: “In the last few years, we have seen that the failure of this council to take decisive action has led to significant regional problems. We support a reform process for the organization and think it would serve both the interests of Turkey and other nations across the world.”

Altun, pointing out that from the very beginning of the COVID-19 crisis Turkey has supported the idea that global problems necessitate global solutions, underlined that solidarity and cooperation among nations are key to resolving these problems.

Altun, who said, “Turkey took every step during the crisis to cooperate with and support other countries in this pandemic, and it will continue to do so,” expressed that without effective burden-sharing and cooperation, humanity only contributes to the prolongation of this crisis.

Altun, declaring that in the age of a global pandemic and great power competition it is important for nations to rethink their foreign policies and grand strategies, added:

“Priorities and objectives need to pay attention to what has been taking place in the world in the last two decades. Our foreign policies need to have visions to handle global problems. The competition among nations may allure countries to maintain the status quo. However, in those two decades, we have seen the failure of that approach. Although there is a period of superpower competition upon us, other nations should act more responsibly and allocate a place in their strategies to establish a form of coordination among nations to respond to the global crises.”

Altun reiterated that instead of waiting for superpowers to play the leadership role in times of crisis, other nations should join forces to reach those goals.

Declaring that states must face the reality of that in this interconnected world, Altun added: “Constructive and innovative diplomacy and international engagement will be key in the process of containing these challenges. Turkey is playing its role and is ready to work together with other nations. It aims to lead by example on how to achieve cooperation and dialogue among nations amid different crises and challenges. We very much welcome competition in this arena.”

Altun concluded that he hoped the conversations and debates in the TRT World Forum will help achieve these goals.