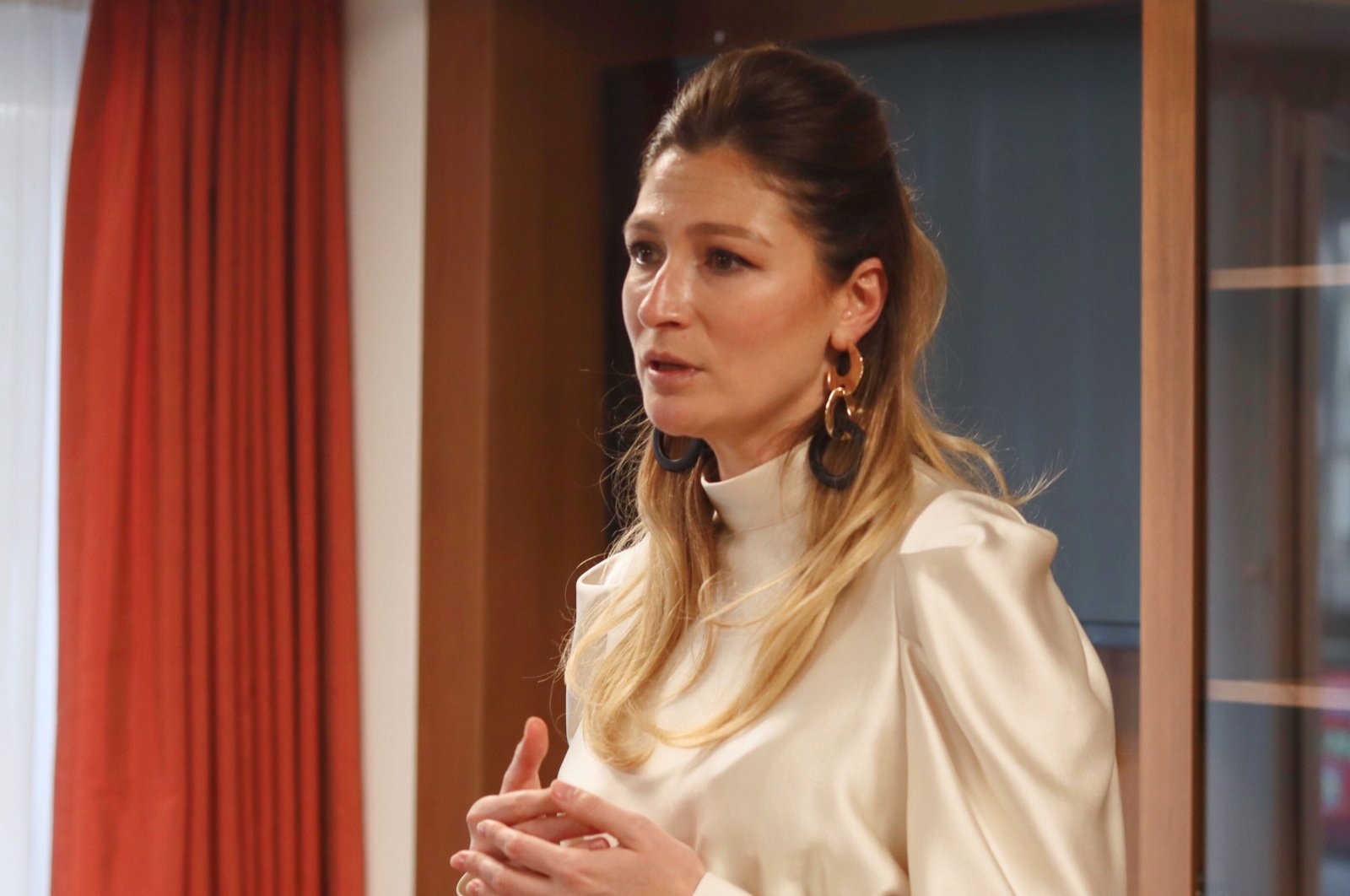 Six years have passed since Russia’s illegal annexation of the Crimean Peninsula. Ukraine calls on the international community to step up efforts, reject the annexation and discourage Russia's land-grab

The situation in Crimea is only a test field for the appetite of Russia in the region as it can be seen in both Syria and Libya, Ukraine’s Deputy Foreign Minister Emine Dzhaparova stated Thursday.

Speaking on Russia’s illegal annexation of the Crimea Peninsula from Ukraine in 2014 and Moscow’s backing of pro-Russian separatists in Ukraine's Donbass region, Dzhaparova told Daily Sabah in an exclusive interview that Crimea should remain on the international community’s agenda until Ukraine’s territorial integrity is restored.

“We believe that Russia is a state that committed a crime against Ukraine, a country that is totally responsible for the occupation and a country that has to de-occupy Crimea,” Dzhaparova underlined.

“In order to increase the effectiveness of the international response to the ongoing occupation of Crimea and other related threats, Ukraine proposed establishing a new consultation and coordination format – the Crimean Platform,” the first deputy minister stated, elaborating that as a key event, a Crimea summit has been planned for the first half of 2021.

Accordingly, Ukraine’s goal was to consolidate under one chapeau all international activities aimed at countering Russia’s temporary occupation of Crimea – starting with sanctions and nonrecognition policy, demilitarization, transport and infrastructure issues to actions in humanitarian and environmental spheres. This platform would also contribute to tracking security issues in the Black Sea region as well as the wider Mediterranean region.

After being asked about reports that Russia was also invited to the summit, Dzhaparova stated that she believed this move would put pressure on Russia.

“For the moment, an official invitation was not sent to Russia. We plan to invite Russia, but we are not expecting that the invitation will be accepted,” she stated, stressing that Russia’s participation is not a prerequisite for the functioning of the platform.

“Of course, we do not have any illusion on what the real face of Russia today is and unfortunately we have to state that the current authority of Russia is one that does not demonstrate any civilized position and that actually commits crimes against humanity,” Dzhaparova said.

Russia annexed the Crimean Peninsula from Ukraine after an illegal independence referendum was held in 2014, following the ouster of Ukrainian President Viktor Yanukovych as a result of the pro-European Union Euromaidan protests in the capital. The U.N. General Assembly (UNGA) later voted to proclaim the Russian action illegal. Along with an overwhelming majority of U.N. member states, Turkey denied recognition of Crimea as Russian territory.

As most ethnic Crimean Tatars opposed Moscow's annexation of the peninsula, Russian authorities have cracked down on the community, abrogating their right to assembly and taking a Tatar-language television channel off the air, as well as detaining and jailing dozens of activists, a situation opposed by Turkey.

“This fake referendum that they conducted in March 2014 is nothing but a tricky attempt to justify their military occupation of the sovereign territory of Ukraine – Crimea,” Dzhaparova stressed.

As a staunch supporter of Ukraine’s sovereignty and territorial integrity, Turkey has frequently voiced that Russia has to end its illegal occupation of the peninsula.

“Both of our countries are living in a very challenging neighborhood and in this modern world we believe that it is a true luxury to have a true friendship and this is exactly what we enjoying with Turkey,” Dzhaparova stated, saying that though Ukraine is satisfied with the level of the strategic partnership with Turkey, there is still potential for further enhancing relations “for the benefit of the two countries as well as for the region.”

“We expect the continuation of political and practical support from Ankara,” she said. “We look forward to cooperating with Turkey in the framework of the Crimean Platform aimed at the de-occupation of Crimea. We would appreciate Turkey’s help to create better living conditions for Crimean Tatars who were forced to leave their homeland after the Russian occupation.”

Dzhaparova stated that she briefed Turkey’s Foreign Minister Mevlüt Çavuşoğlu on the platform and that Ukraine expected Turkey to join this initiative. She also stressed that the declaration would fix nonrecognition and declared Turkey will never recognize the attempted annexation of Crimea.

Meanwhile, Ukraine’s President Volodymyr Zelenskiy will pay a working visit to Turkey on Friday during which he will come together with President Recep Tayyip Erdoğan in Istanbul to discuss all aspects of bilateral relations as well as steps aimed at further enhancing cooperation.

“We believe that we will sign a couple of documents that will further intensify our bilateral cooperation in different spheres in military, defense, security as well as in cultural, humanitarian dimensions but moreover what we expect is actually an issue that is related to Crimea,” Dzhaparova pointed out. A statement by the Ukrainian government on Wednesday stated that a military cooperation agreement would be signed which would reflect a guarantee for security and peace in the Black Sea region.

“We have plenty of joint projects to implement. Starting from security and defense, high-tech, military-technical fields up to trade and economic, cultural and educational fields,” Dzhaparova highlighted, adding that more investment of Turkish companies in infrastructural projects is expected while negotiations on a free trade agreement are at the final stage.

The deputy minister further stated that Ukraine also expects much from the international community in tackling Russian aggression and human rights violations.

Saying that Kyiv appreciated the swift response of the international community’s vis-à-vis Russia’s attempt to annex Crimea and redraw the borders of modern Europe, Dzhaparova reminded that on March 27, 2014, the UNGA adopted a resolution calling on states and international organizations not to recognize any change of status of Crimea and the city of Sevastopol.

The EU imposed sanctions on Russia after it annexed the peninsula and refuses to recognize Moscow’s authority there. The bloc has separate sanctions targeting the Russian economy and other restrictive measures linked to the annexation of Crimea and Sevastopol.

“We expect the international community to stick to decisions observing the nonrecognition policy,” she underlined.

Indicating that Russia attempted to enhance ties with the illegally occupied region, Dzhaparova said: "Russia is incorporating Crimea into its administrative structure, conducting militarization of Crimea and changing its demographic composition."

“There is also a need to consolidate the common resilience of the Black Sea littoral states and our main partners in the EU and NATO in the face of Russia’s ever-growing belligerent behavior in the region that poses security threats and challenges to our common interests,” she added.

Touching upon the humanitarian situation, Dzhaparova stated that Russia forced the independent media out of the peninsula and shifted pressure to citizen journalists and human rights activists. Accordingly, monitoring bodies of international organizations are also unable to exercise their mandate in Crimea.

“The situation is bad and it is deteriorating daily,” the deputy minister said. “Unjustified searches, detentions and arrests under false charges, discrimination on religious and national grounds, intimidations of activists, journalists, advocates, etc. became a fact of life in today’s Crimea.”

“To consolidate the occupational regime, Russia pursues a covert demographic change in Crimea. 45,000 Ukrainian citizens have left Crimea over intimidation, persecution and fear. Estimates of how many people were brought to Crimea from Russia vary from 150 to 500 thousand people,” she highlighted.

She further pointed out that since 2014, Russia conducted 11 conscription campaigns illegally drafting about 25,000 Crimean residents into the Russian military. “The 12th campaign is ongoing,” Dzhaparova stated, explaining that Moscow’s influence and presence in the peninsula are not voiced when Russia states its official position.

Saying that war and casualties including civilian deaths are a tragedy, Dzhaparova stated that the situation is “just more proof that both protracted and hot conflicts remain a major factor of instability threatening security in Europe, which may lead at any moment to the resumption of armed hostilities and heavy human losses.”

She called on both sides to cease military action and resolve the conflict in accordance with international law.

“However, mediation by Russia, which itself continues aggression against Ukraine and occupation of Ukraine’s sovereign territories, does not add optimism to that turbulent situation,” she continued.

Relations between the two countries have been tense since 1991 when the Armenian military occupied Nagorno-Karabakh, an internationally recognized territory of Azerbaijan. Referencing this fact, four U.N. Security Council (UNSC) and two UNGA resolutions, as well as decisions by many international organizations, demand that Armenia's occupying forces withdraw from Nagorno-Karabakh and seven other occupied regions of Azerbaijan. Yet, efforts including that of the Minsk Group, set up in 1992 by the Organization for Security and Co-operation in Europe (OSCE) to find a peaceful solution to the conflict, have seen no results.