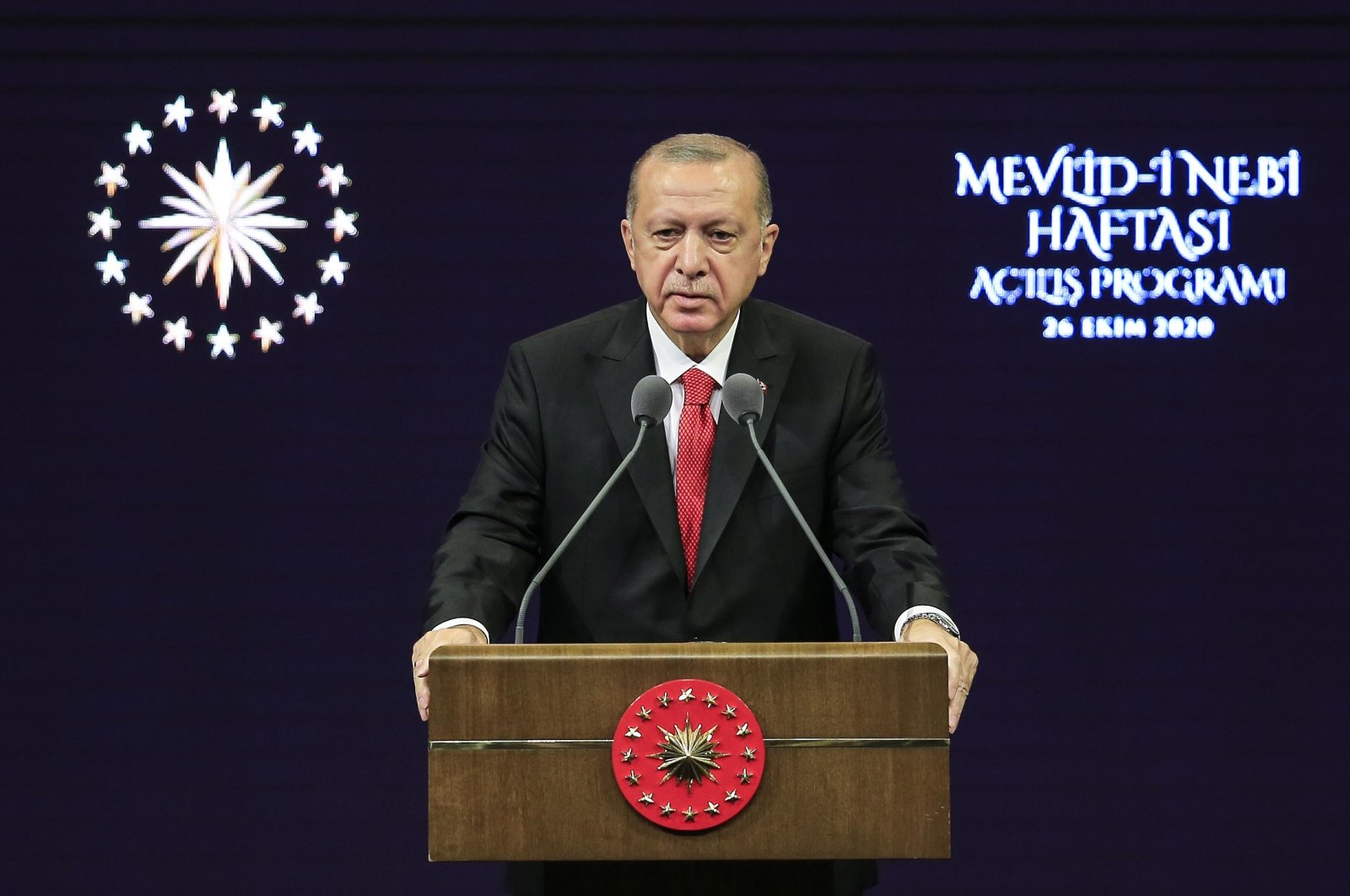 President Recep Tayyip Erdoğan speaks at an event organized for the Mawlid an-Nabi (the birth of the Prophet Muhammad) in the capital Ankara, Oct. 26, 2020. (AA)
by DAILY SABAH WITH AGENCIES
Oct 26, 2020 3:03 pm

"It becomes more and more difficult to be a Muslim and live an Islamic lifestyle in Western countries," the president said at an event organized for the Mawlid an-Nabi (the birth of the Prophet Muhammad) in Ankara.

Expressing that Turkey regards Islamophobia as a matter of national security and acts upon it in this respect, Erdoğan called on the European Union to take action against this hate crime.

"I believe EU institutions have a major responsibility in tackling Islamophobia. The European Council can no longer ignore Islamophobia," he said.

"European politicians should call on Macron, who leads anti-Muslim hatred in the continent, to stop his policies," he continued.

Macron on Wednesday said he won’t prevent the publication of insulting cartoons of Prophet Muhammad under the pretext of freedom of expression, a statement that sparked outrage in the Arab and Muslim world. France recently launched an extensive witch hunt against the Muslim community following Macron's remarks characterizing Islam as a problematic religion that needs to be contained. Many nongovernmental organizations (NGOs) and mosques have been shut down in the last two weeks, while assaults against Muslims have spiked.

Macron this month also described Islam as a religion “in crisis” worldwide and said the government would present a bill in December to strengthen a 1905 law that officially separated church and state in France. He announced stricter oversight on schooling and better control over foreign funding of mosques. But the debate over the role of Islam in France has hit a new intensity after the beheading of teacher Samuel Paty which prosecutors say was carried out by an 18-year-old Chechen who had contact with a terrorist in Syria.

Turkey has become one of the countries that reacted most harshly to the French president's remarks.

“The person in charge of France has lost his way. He goes on about Erdoğan all day. Look at yourself first and where you are going. I said in Kayseri yesterday, he is a case, and he really must be checked up,” Erdoğan said on Sunday.

The president initially said Saturday that Macron needs “mental treatment” because of his hostility toward Islam. “What is Macron’s problem with Islam and Muslims? He needs mental health treatment,” Erdoğan said at the ruling Justice and Development Party (AK Party) congress.

“What can be said to a head of state that treats millions of members of a religious minority in his country this way? First of all, (he needs) a mental check,” Erdoğan added.

France on Saturday recalled its ambassador in Turkey, Herve Magro, for consultations, as an Elysee Palace statement explained the recall of the envoy by saying that Erdoğan’s comments about his French counterpart were “unacceptable.”

The Turkish Foreign Ministry on Sunday also criticized France for escalating tensions and maintaining its one-sided and self-centered approach.

In a statement, the Foreign Ministry said France’s recall of its ambassador in Ankara and the issues mentioned in French Foreign Minister Jean-Yves Le Drian’s remarks show that Paris has been maintaining its self-centered approach to bilateral relations.

“The French president and French media outlets have not been reacting against our president and country being shown as targets,” the ministry said, adding that the display of derogatory anti-Muslim cartoons on government buildings has also not received any criticism.

Le Drian on Saturday accused Turkey of “trying to whip up hatred” against France, continuing a war of words between the two NATO allies over Islam. Le Drian slammed the “insults” against Macron, describing them as “unacceptable conduct” from an ally.

Ankara’s “hateful, slanderous propaganda against France” revealed a desire to “whip up hate against us and in our midst,” he added.

Social media campaigns across Morocco continued to call for a boycott of French products as hashtags on the boycott were the top trending topics on Twitter in the country over the weekend.

"What is happening in France is persecution of a religious minority. France can't justify such persecution under the pretext of expressions of freedom and secularism," said Mohammed Jabron, an Islamic history professor.

He added that "the French state is responsible for protecting its people from abuses and offenses to their sanctities."

A number of Moroccan parties also slammed the French campaign against Islam.

The Unity and Reform Movement rejected French attempts to abuse Islam and its symbols.

The country's second-largest opposition party, the Istiqlal (Independence) Party, also expressed "deep resentment over the insulting cartoons against Prophet Muhammad, peace be upon him and the remarks against Islam."

The party called for dialogue to address cases connected to Islamophobia and extremism and to find a formula for coexistence.

Morocco's Foreign Ministry also said in a statement that the systematic publication of such cartoons "reflects the lack of maturity of their perpetrators."

Strongly denouncing the move, it said the "freedom of an individual ends where the freedom of others and their beliefs begin."

It added that freedom of expression cannot explain the attacks and provocations on Islam, a religion with nearly 2 billion adherents worldwide.

In Egypt, users mocked Macron by depicting him like a dog in social media posts. They have shared a list of French brands such as carmakers Peugeot and Renault and well-known dairy names Kiri, Babybel and Danone, calling for people to boycott them.

In Qatar, shops are also reported to have removed French products from their shelves.

The Organisation of Islamic Cooperation (OIC) condemned the "practice of running satirical caricatures depicting the Prophet Muhammad," calling it "harmful to Muslim-French relations."

Libya's High Council of State called on the government to put an end to economic ties with France while abolishing oil deal with French oil company Total.

Total is present in many Muslim majority countries. In Pakistan, Bangladesh, and Turkey, countries where the backlash against France over the cartoons has been most vociferous, Total is mainly focussed on selling its petrochemical and petroleum products. In Saudi Arabia, as well as in several other Gulf states, Total has investments in exploration and production, and in some cases refining.

In a store Reuters visited in Kuwait City on Sunday, cosmetic and skin care products produced by L'Oreal had been cleared from the shelves. The store was one of around 70 outlets tied to a cooperative union that decided to stop selling French products.

But L'Oreal's exposure – along with other players in the French fashion sector – is limited.

Combined with Africa, the Middle East is the smallest contributor to L'Oreal's earnings, representing just over 2% of earnings.

The nongovernmental Union of Consumer Co-operative Societies, which groups more than 70 establishments, issued the boycott directive in an Oct. 23 circular. Several co-ops visited by Reuters on Sunday had cleared the shelves of items such as hair and beauty products made by French companies.

"All French products have been removed from all Consumer Cooperative Societies," union head Fahd Al-Kishti told Reuters, adding that the move was in response to "repeated insults" against the Prophet and had been taken independently of Kuwait's government.

The French Foreign Ministry said in a statement Sunday evening that its diplomats were mobilizing to ask countries where boycotts were being organized or hate calls issued not to back them and to provide assurances that French citizens would be safe.

“In numerous countries of the Middle East, calls to boycott French products... and more generally, calls to demonstrate against France, in sometimes hateful terms, have been relayed on social media,” the French Foreign Ministry said. It added that such calls “denature” France's positions on freedom of expression and conscience.

Despite the initial momentum, the impact of the boycott is difficult to ascertain for now, with only isolated reports of sales of French goods being affected.

France is a major global exporter of grain, and some of its biggest markets are in Muslim-majority countries. Algeria is France's 10th largest export market for agricultural products, according to French farm ministry data, with exports worth around 1.4 billion euros in 2019. Morocco, one of the Muslim countries that condemned the publication of the cartoons of the Prophet, was France’s 17th largest agricultural product export market last year, with exports worth 700 million euros.

One target of the calls for boycotts in Saudi Arabia was the Carrefour supermarket chain. A campaign for consumers to stay away from its stores was trending on Saudi social media over the weekend.

Reuters journalists in the Saudi capital Riyadh visited two Carrefour shops, which appeared to be as busy as normal.

For major French fashion labels, the Middle East represents a small portion of sales compared with the United States, Asia or Europe. Big brands like LVMH-owned Louis Vuitton or privately owned Chanel have stores across the Middle East, including in Saudi Arabia and Dubai.

But wealthy Middle Eastern clients tend to purchase luxury goods while traveling away from home. LVMH, which also owns Christian Dior, does not break out how much the Middle East contributes to earnings.

France is one of the world's leading arms exporters. Thales sells weapons, aeronautics technology and public transport systems to a number of Muslim-majority countries. Clients include Saudi Arabia, the United Arab Emirates (UAE), Turkey, and Qatar, according to the company's website. Egypt and Qatar are among countries that have ordered the Rafale military jet from Dassault, which also views the region as a big market for its private jets.