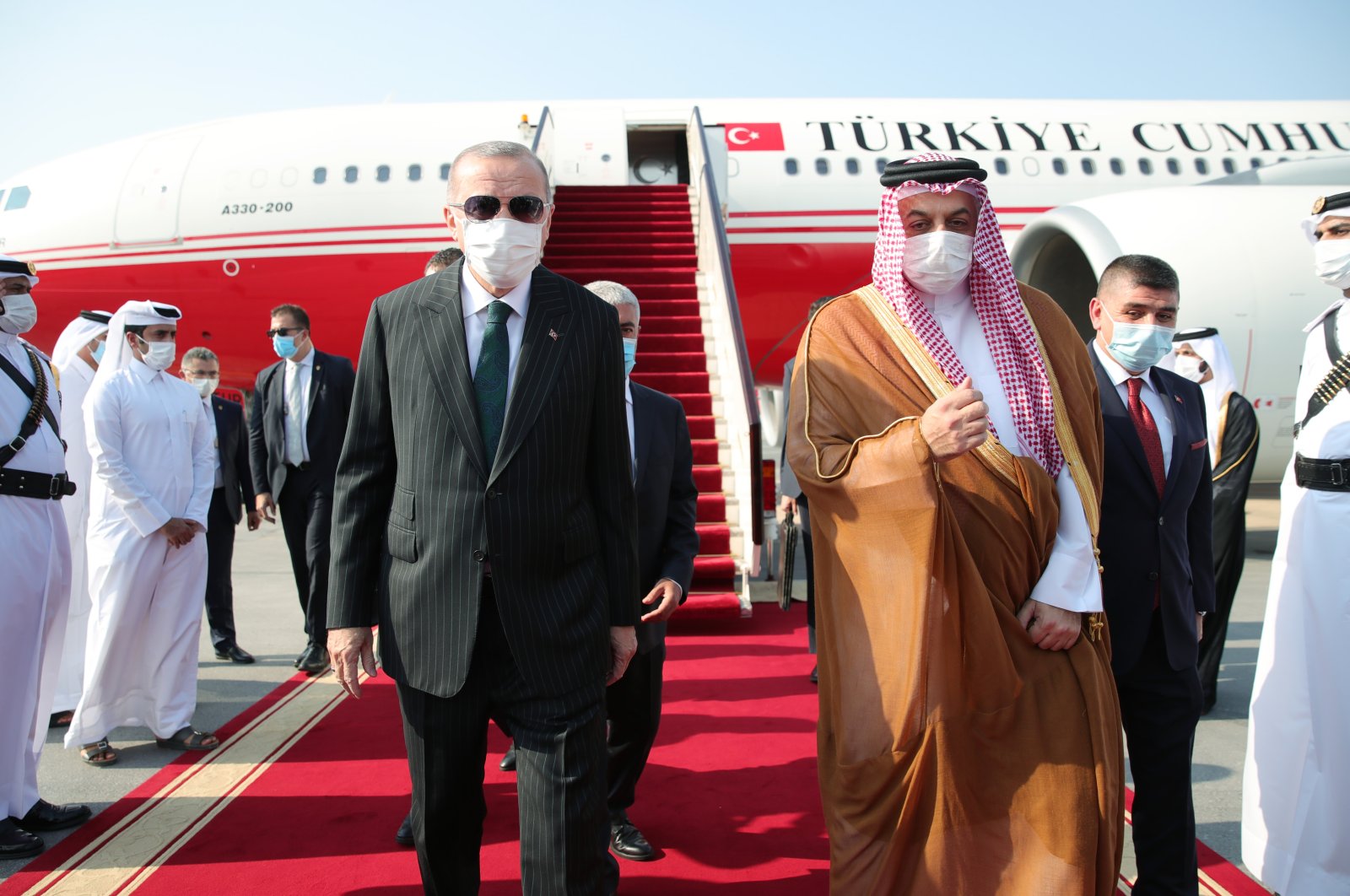 President Recep Tayyip Erdoğan on Wednesday paid a single-day working visit to the Gulf states of Qatar and Kuwait.

Erdoğan conveyed his condolences to the recently sworn-in Kuwaiti Emir Al Sabah on the passing of his predecessor Sheikh Sabah Al Ahmad Al Jaber Al Sabah, who recently died at the age of 91 after ruling the country since 2006. In the meeting, officials also discussed bilateral relations and regional issues.

Erdoğan arrived in Qatar later in the day after holding meetings in Kuwait. He was welcomed by a Qatari delegation headed by Defense Minister Khalid bin Mohammad Al Attiyah and Turkey's Ambassador to Qatar Mehmet Mustafa Göksu.

Erdoğan later met Emir Sheikh Tamim bin Hamad Al Thani as part of his visit. In a closed-door meeting that lasted more than an hour, the duo discussed opportunities to strengthen bilateral cooperation and also exchanged views on regional and international issues.

Turkey enjoys deep-rooted friendship and fraternity with Qatar, and relations between the two countries have been rapidly improving in all fields. While bilateral visits add major momentum to relations between Turkey and Qatar, both countries also closely coordinate and cooperate on regional issues.

Annual meetings of the Supreme Strategic Committee, established in 2014 as a bilateral mechanism to form the institutional basis of high-level dialogue and cooperation between Turkey and Qatar, are co-chaired by Erdoğan and the Emir of Qatar Al Thani. In this regard, the first meeting of the committee was held in Doha on Dec. 2, 2015, and the second and third meetings were convened in Trabzon on Dec. 18, 2016, and in Doha on Nov. 14-15, 2017. The most recent, fourth meeting was held in Istanbul on Nov. 26, 2018. On the occasion of those meetings, numerous agreements, protocols and memorandums of understanding (MoU) were signed, which further strengthen the cooperation between Turkey and Qatar in various fields.

In addition, Qatar ranks first among the Gulf countries in terms of the number of projects undertaken by Turkish contractors. The volume of Qatari capital investments in Turkey has also been increasing steadily. In line with Turkey’s deepening relations with Qatar, Turkey has become an important destination for Qatari tourists.

The two countries are also the main backers of Libya’s United Nations-recognized legitimate Government of National Accord (GNA) against putschist Gen. Khalifa Haftar’s forces in the Libyan conflict.

Foreign Minister Mevlüt Çavuşoğlu traveled to Kuwait last week to offer condolences on the death of the Gulf state's emir.

"In #Kuwait to convey our condolences on behalf of (Turkish) President @RTErdogan and the Turkish nation," Çavuşoğlu wrote on Twitter.

Çavuşoğlu also visited the new emir and offered condolences to the Sabah family.

"We offered the condolences of (Turkish) President Recep Tayyip Erdoğan and our nation to the new Emir Sheikh Nawaf. We extend our condolences to the people of Kuwait; our friends, brothers, and sisters," Çavuşoğlu said in a tweet.

In a statement, Erdoğan had said he received the news of the emir's demise with "great sadness."

"On behalf of the Turkish nation, I convey my sincere condolences to the friendly and brotherly people of Kuwait."

Turkey and Kuwait, which gained its independence in 1961, celebrated the 50th anniversary of the establishment of their diplomatic relations in 2014. Turkey enjoys multifaceted relations with Kuwait based on common cultural and historical ties.

Turkey’s bilateral relations with Kuwait have gained momentum in recent years through high-level visits and numerous agreements. Five state visits took place between the two countries in 2017, while in 2018, the late Emir Al-Sabah attended the OIC Extraordinary Summit on Al-Quds in Istanbul. In the same year, Speaker of the Kuwaiti National Assembly, Marzouq Ali Al Ghanim visited Turkey in order to attend the presidential inauguration of President Recep Tayyip Erdoğan and the Third Meeting of Speakers of Eurasian Countries’ Parliaments held in Antalya on Oct. 8-11, 2018.

The two nations' bilateral trade volume, which fell between 2015 and 2017, reached a level of $678 million by the end of 2018 and exceeded the trade volume recorded in 2015. Currently, more than 300 Kuwaiti companies are operating in Turkey, and the total value of investments by these companies is worth $1.7 billion. Kuwaiti investments in Turkey focus on the areas of finance, real estate, trade and industry. On the other hand, the total amount of tenders won by Turkish companies in Kuwait currently comes to $6.5 billion-$7 billion.