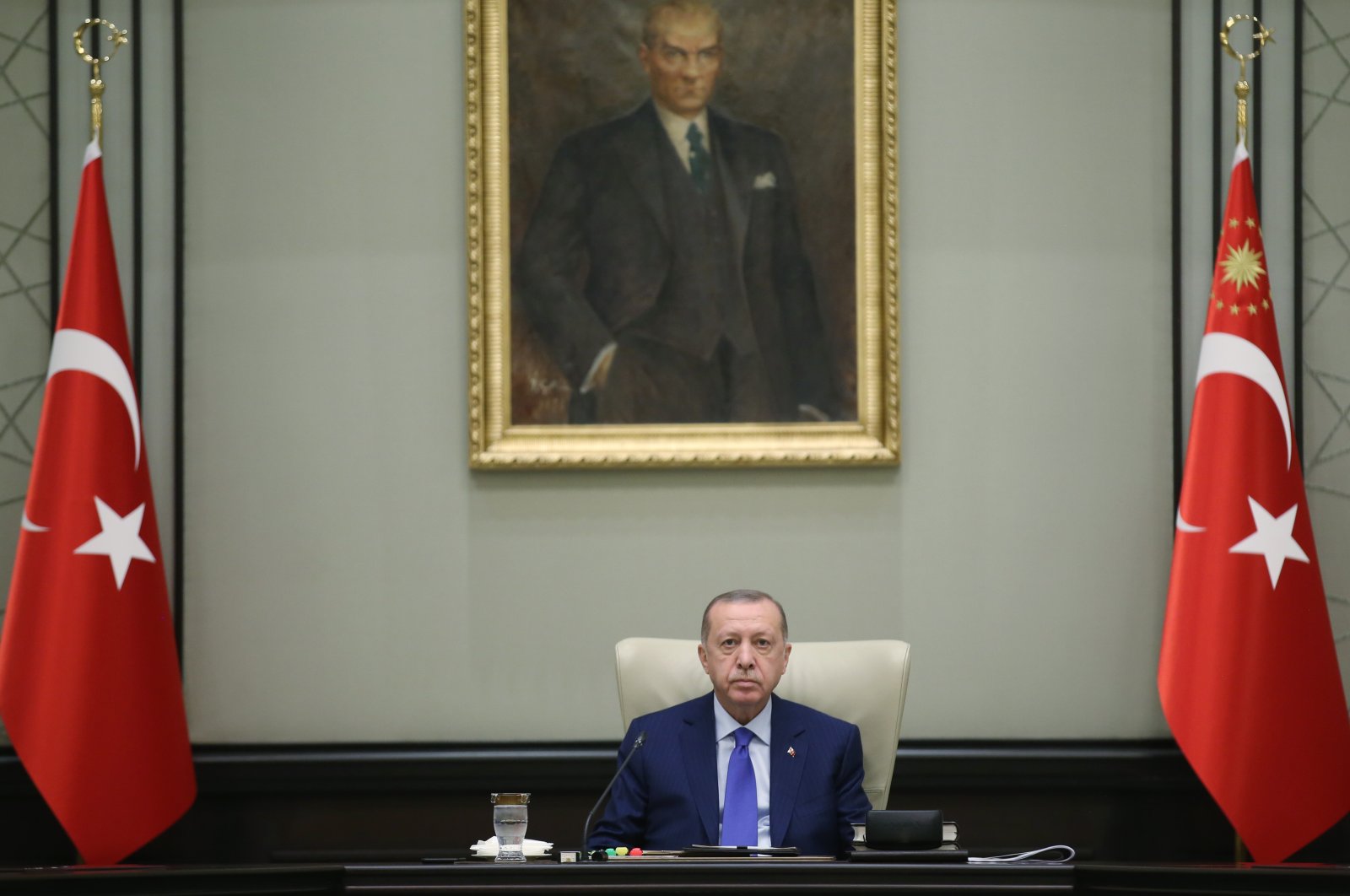 President Recep Tayyip Erdoğan criticized French President Emmanuel Macron’s initiative to reform Islam, saying that he uses the crises his country is responsible for as a reason to attack the religion.

“The main goal of such initiatives led by Macron is to settle old scores with Islam and Muslims,” Erdoğan said in his speech recorded for the Organisation of Islamic Cooperation (OIC) summit Tuesday.

"The ones who are disturbed with the rise of Islam present crises that they themselves created as an excuse to attack our religion. Anti-Muslim, Islam rhetoric is today the most useful tools of Western politicians to cover up their own failures," the president continued.

Macron argued last week that "Islamic separatism" was problematic, and added that: "The problem is an ideology that claims its own laws should be superior to those of the republic."

On Oct. 2, Macron unveiled a new bill that would extend the ban on religious emblems, which notably affects Muslim women who wear headscarves or veils, to private-sector employees providing public services. The state will also have the power to step in where local authorities make unacceptable concessions to Muslims, he said, citing "religious menus" in school canteens or segregated access to swimming pools. The draft law proposes restricting homeschooling to avoid having children "indoctrinated" in unregistered schools that allegedly deviated from the national curriculum.

The bill is expected to be sent to parliament early within this month.

Macron's speech was widely criticized by French Muslims due to fears that the bill, which will be submitted to parliament in December, could trigger abuse of their rights.

Some nongovernmental organizations (NGOs) or organizations that "act against the law and values of the country" might be closed or face tight financial audits, according to the controversial plan.

It has sparked criticism, with some representatives of the Muslim community describing the move as Islamophobic and discriminatory.

Mentioning the recently popular terms such as "French Islam," "European Islam" and "Austrian Islam," Erdoğan said that such terms are the latest examples of attempts of attacks against Islam and Muslims.

"There is an attempt to have a Muslim citizen profile that does not raise his/her voice to brutality, remains silence against the cruel, who is passive, diffident, fearful and unassuming," Erdoğan further warned.

"They try to have an anti-Islam system where the religion remains only within homes, with no allowance to any religious symbols and principles in streets, bazaars and social life. This system, where the religion is under control of the state, taken under pressure and tried to be shaped, is not a democracy, but totalitarianism," he said, adding that no one, especially the Muslim countries, can allow such beadledom to take place.

France has the largest Muslim minority in Europe, estimated at 5 million or more out of a population of 67 million. The place of religion and religious symbols that are worn in public has been a matter of controversy in the staunchly secular country. For years, rights groups have argued that France's secular laws foster anti-Muslim hatred and discriminate against Muslim women. France banned schoolchildren from wearing religiously distinctive clothing or emblems in 2004, following controversy over Muslim schoolgirls wearing headscarves.

The country was also the first country in Europe to ban Islamic face veils, such as the burqa and the niqab, in public places in 2010. In 2014, the European Court of Human Rights upheld the ban but said the law could appear excessive and encourage stereotyping. France was also embroiled in a row over bans on the burkini, a full-body modest swimsuit worn by Muslim women, in resorts around the Riviera.

Highlighting the need for Muslims to set aside differences and focus on shared problems to solve critical problems that have been destroying Muslim countries, Erdoğan also criticized newly formed European concepts of Islam for attempting to shutting the voice of the people.

"Muslims can set their differences of opinion aside and try to produce solutions by utilizing the concept of consultation," Erdoğan said. He argued that Muslims can easily overcome their issues by focusing on common ground and shared issues rather than differences.

Noting that nearly 1,000 Muslims are killed every day as a result of terrorism or violence globally, Erdoğan said concepts like racism, nationalism, sectarianism and terrorism are destroying Islam from within.

“We will not let imperialists divide us by using the Sunni-Shiite, black-white, Turkish-Kurdish and Arab-Persian labels,” he said, adding that Muslims cannot accept killings.

"Members of a religion that sees killing one person the same as killing humanity as a whole cannot commit any slaughters," the president highlighted.

Underlining that in Islam superiority lies in closeness to Allah, not in richness, nor race, Erdoğan expressed that the daily political debates should not overshadow the solidarity in the Muslim community.

"If people do not fulfill their religious needs from credible sources, they will be trapped in heretic groups that have no relation to Islam, such as Daesh, FETÖ (the Gülenist Terror Group), al-Shabaab and Boko Haram," he said.