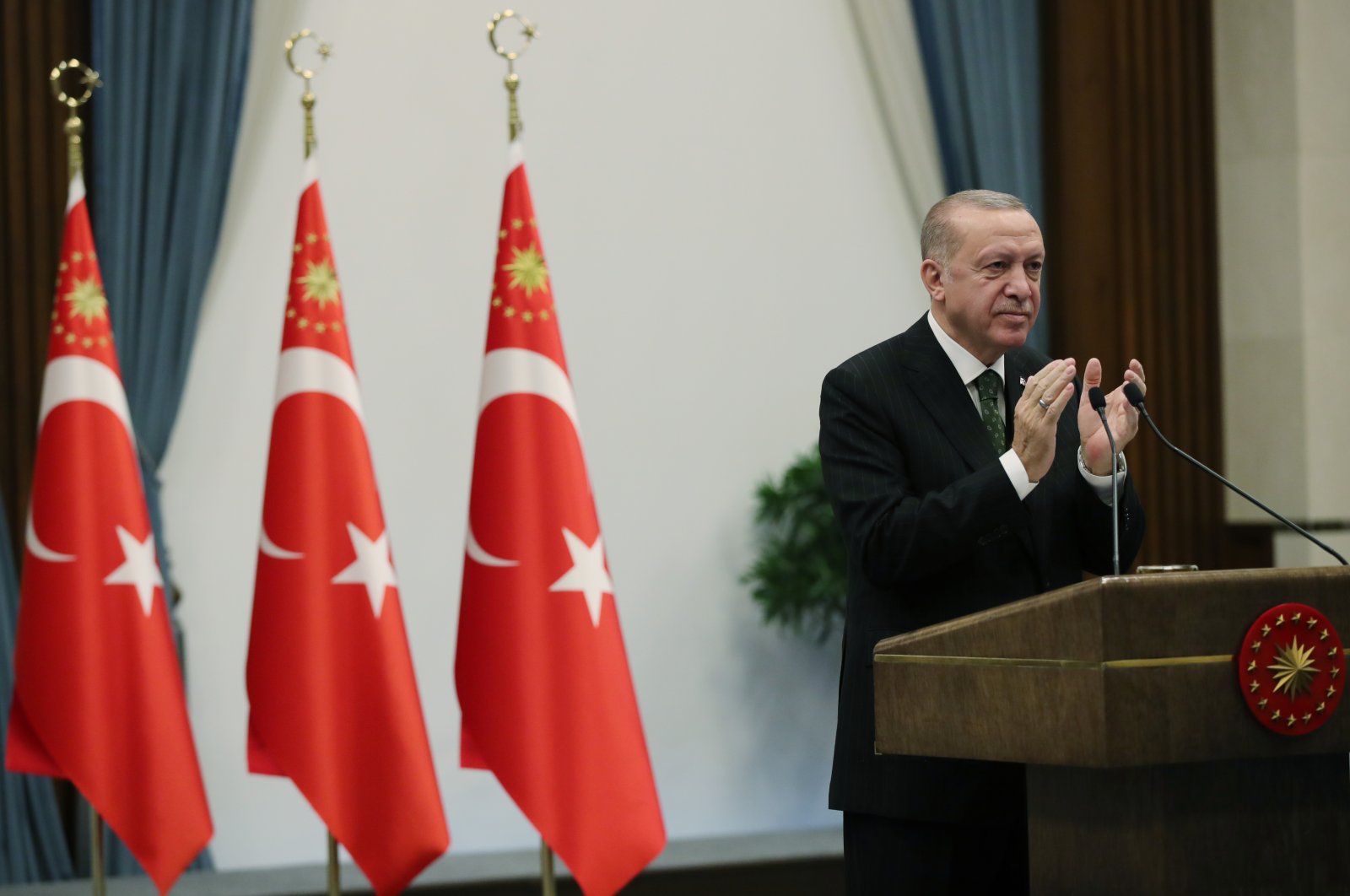 President Recep Tayyip Erdoğan on Wednesday questioned the U.S.' alliance with Turkey following the former's decision to impose sanctions on the latter over the purchase of S-400 missiles. Noting that the bond between the two countries was established largely through NATO membership, Erdoğan asked: "What kind of alliance is this?"

"The (U.S. Countering America's Adversaries Through Sanctions Act) CAATSA sanctions have never been imposed on any country since they were first approved in 2017. Turkey is the first country that has faced CAATSA, and it is the U.S.' NATO ally," the president said during the inauguration ceremony of Niğde-Ankara highway which he attended via a videoconference, underlining that it is a blatant attack on Turkey's sovereignty.

"U.S. sanctions aim to prevent Turkey’s developments in the defense sector and make the country dependent once again; this decision is an attack on Turkey's sovereign rights," he said.

Erdoğan also highlighted that Turkey has reached the point that it can no longer be affected dramatically by any sanctions.

"We will work twice as hard to make our defense industry fully independent," he said.

"The U.S., which has not met any of our needs for obtaining such systems, has resorted to the sanctions weapon because we have met our needs elsewhere," the president continued.

The U.S. imposed sanctions late Monday on Turkey's Presidency of Defense Industries (SSB) and its chief Ismail Demir, the U.S. Treasury website confirmed. Sanctions were imposed to penalize Turkey for its purchase of the Russian S-400 missile defense system.

The sanctions through CAATSA – designed to deter any country from agreeing to military deals with Russia – also restrict U.S. loans and credits to the Presidency of Defense Industries, although that is not seen as having a significant impact.

"The circumstances that led Turkey to purchase the S-400 missiles is known very well to everyone. In this respect, President Trump has also expressed Turkey's rightfulness multiple times," the foreign ministry statement said, rejecting the sanctions.

Underlining the baselessness of the U.S. claim that the S-400 missiles are not suitable with NATO systems, the statement added that Turkey has repeatedly offered to form a technical workgroup with NATO to handle the issue objectively and yet no steps have been taken on the matter.

"These sanctions are the reflection of shame and a numb mindset. The MHP rejects and condemns the sanction decision," Bahçeli said, adding that the CAATSA sanctions mark the first time Washington imposed sanctions on a NATO ally.

He noted that the U.S. is not in a position to approve or reject Turkey's domestic affairs and its attempts to act like one is an example of insolence.

"No sanctions, pressure, or threats will make us change our way," Bahçeli said, reaffirming Turkey's determination to pursue its interests independently.

Monday's move was the first time the U.S. deployed CAATSA legislation against a NATO partner and comes as Washington seeks to discourage other countries, including its Middle East ally Egypt, from buying Russian military equipment.

The sanctions law, which U.S. President Donald Trump signed in 2017, mandates that the president choose five out of a choice of 12 sanctions, from banning visas and denying access to the U.S.-based Export-Import Bank to harsher options such as barring transactions with the U.S. financial system and denying export licenses.

The sanctions caused massive reactions in Turkey, as almost all political parties united against the U.S.' "unfair" stance as the defense industry authorities highlighted the determination to move forward in line with the national security aims.

"Under the leadership of President Recep Tayyip Erdoğan, we are determined in our aim toward a fully independent defense industry. Any decision that targets me and our institution abroad would not change my or my team's stance. It would not stop the Turkish Defense Ministry in any shape or form," Demir, the main victim of the sanctions, initially said on his official Twitter account Monday.

On Tuesday, Demir released another series of statements, expressing that in his opinion, Turkey-U.S. ties will survive this obstacle. "We expect this will not influence our relations much," he said and continued: "We are NATO allies. As they themselves said, there is cooperation with Turkey in many areas. We and they expect this to continue."

"We will find remedies for this in our own circles. From our point of view, the issue of developing domestic industry will continue, maybe more quickly," Demir added.

Erdoğan also heralded in his speech the newest developments in the Turkish defense industry, particularly the first national air defense missile system, HISAR A+, saying that the final tests of the final product have been conducted successfully. The president said tests were delayed as a consequence of an embargo that interrupted the arrival of some products coming from abroad.

“What happened next? We developed the product ourselves on short notice, integrated it into our missile, and despite a small delay, we reached our expected end,” Erdoğan said, underlining that despite hidden sanctions and embargoes, Turkey has produced its own products and continues to strengthen its defense industry.

The HISAR A+ defense system was jointly developed by leading defense contractors ASELSAN and ROKETSAN, under the coordination of the SSB. HISAR missiles were developed to protect military bases, ports, facilities and troops against air-based threats as well as to meet the needs of the Turkish army for a low and medium-altitude air defense system. HISAR A+ completed the test phase in March 2019, when it neutralized a target plane with pinpoint accuracy in vertical shooting. A 100% success was achieved in the test shooting of the missile, in guiding it with radar information, target detection, tracking and achievement of the target with the searcher cap. With the change of engagement subsequently, the missile was directed to the second target in the air, and the same level of success was achieved.

Previous talks between Turkey and the U.S. on the purchase of Patriots collapsed over a host of issues, from the S-400s to Ankara's dissatisfaction with Washington's terms. Turkey has said it will only agree to an offer if it includes a technology transfer and joint production terms. Ankara has repeatedly stressed it was the U.S.' refusal to sell Patriots that led it to seek other sellers, adding that Russia had offered a better deal, including technology transfers. Turkey even proposed setting up a commission to clarify any technical issues.

Turkey has been a member of the NATO alliance for nearly 70 years.

The NATO chief Tuesday urged allies to find a "positive solution" after the U.S. decided to impose the sanctions on Turkey.

"I urge all NATO allies and Turkey and other allies to look into whether there are ways to find a positive solution," Jens Stoltenberg told a joint news conference with Prime Minister of Montenegro Zdravko Krivokapic in Brussels.

"I regret that we are in a situation where NATO allies have to impose sanctions on each other," Stoltenberg said.

While the U.S. harms the bonds of the alliance, other allies of Turkey have backed the country against the sanctions, with supportive statements coming one after the other.

The latest message came from the Turkic Council as the deputy secretary-general of the council, Gismat Gozalov, said on Tuesday: "The U.S. decision to impose unilateral sanctions on Turkey is unfair."

"We stand with Turkey and support the proposal to address this issue in an objective, realistic and politically unbiased manner via dialogue and diplomacy," he wrote on Twitter.

Another statement came from the Turkish Republic of Northern Cyprus (TRNC) on Tuesday saying: "We regret and condemn the unfounded sanction decision taken by the U.S. on December 14, 2020, by citing Turkey's purchase of S-400 air defense system."

This decision taken against Turkey, one of the most important members of NATO, does not comply with the alliance relationship, it added.

In a separate statement, TRNC's Prime Minister Ersan Saner said: "It is extremely wrong to impose sanctions on Turkey just because it purchased S-400 missiles for its own stability and that of its region."

Previously, Russia, Iran and Azerbaijan released a series of supportive messages to Turkey, questioning the judgment of the U.S.

Russian Foreign Minister Sergey Lavrov said "the U.S. sanctions on Turkey is yet another reflection of the country's arrogant stance toward international law." Such an approach does nothing for the credibility of the U.S. as a responsible participant in the international arena, including military-technical cooperation, Lavrov added at a news conference in Bosnia and Herzegovina's capital Sarajevo.

"U.S. addiction to sanctions and contempt for international law at the full display again. We strongly condemn recent U.S. sanctions against Turkey and stand with its people and government," Iranian Foreign Minister Javad Zarif said on Twitter on Tuesday. He shared the tweet with the hashtag #Neighborsfirst.

"We condemn the U.S. decision on unilateral sanctions against Turkey, for acquisition of S-400 air defense systems," Azerbaijani Foreign Ministry's spokesperson Leyla Abdullayeva also said in a statement on Twitter.