Erdoğan: Turkey has right to be part of solution process in Nagorno-Karabakh as much as Russia 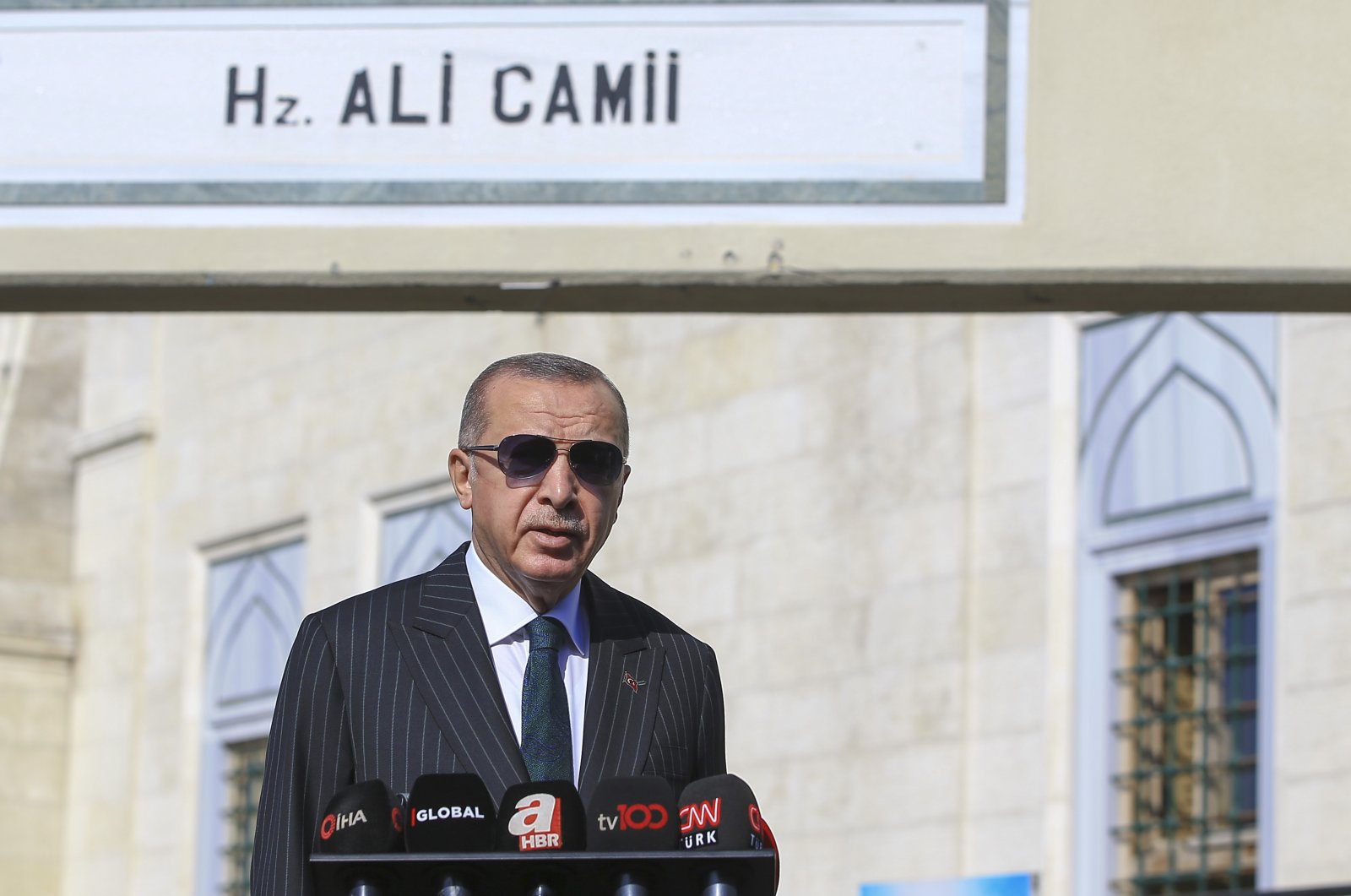 Turkey has the right to be involved in a solution for Nagorno-Karabakh as much as Russia does, President Recep Tayyip Erdoğan said on Friday, adding that he hopes the two countries can work together toward the goal.

Speaking to journalists following Friday prayers in Istanbul, Erdoğan referred to Azerbaijani President Ilham Aliyev's recent remarks calling on Turkey to mediate for cease-fires, saying that such words cannot be put aside.

"Azerbaijan says if Armenia offers Russia (to mediate) we are offering Turkey. It says Turkey should also be present with Russia in these peace talks. In fact, I have not heard any negative stance from Russia in this respect," the president expressed.

On Oct.12, Aliyev said that although not knowing when would the talks with Armenia begin, he wants Turkey to participate in the talks as well.

Aliyev said the Organization for Security and Co-operation in Europe (OSCE) Minsk Group, formed to mediate the conflict and led by France, Russia and the United States, was biased, and that Turkey, which he described as a global power due to its involvement in Syria, Libya and other international conflicts, must be involved in the solution process.

"Turkey is also a member of the Minsk Group, why shouldn't it be among the co-chairs? Even if many Western countries do not want to accept it, Turkey's word is big, it's fully independent," he said.

The Nagorno-Karabakh region has seen heavy fighting over recent weeks, which has claimed the lives of 600 people, including civilians. The region is considered by the United Nations and international law to be part of Azerbaijan.

The clashes began on Sept. 27 when Armenian forces targeted civilian Azerbaijani settlements and military positions in the region, leading to casualties. World powers, including Russia, France and the United States, have called for a new cease-fire. Turkey, meanwhile, has supported Baku's right to self-defense and demanded the withdrawal of Armenia's occupying forces.

Regarding the S-400 missile purchase dispute with the U.S., the president confirmed that Turkey has conducted a test launch.

"The U.S. approach is not binding for Turkey," he emphasized.

"What else can we do but test the opportunities we have? We do not have to go and ask the U.S.' permission for it. Greece has S-300s. Beyond conducting test launches, Greece uses these as weapons. Does the U.S. say anything to them? No, it doesn't," Erdoğan continued, underlining that Turkey is determined to pursue its S-400 purchase.

In response to reports that Turkey conducted the first tests of S-400s, the U.S.’ NATO Ambassador Kay Bailey Hutchison said Wednesday that it is problematic that Turkey tested S-400s within NATO territory. She added that Turkey sacrificed many benefits in order to own S-400s.

The S-400 air defense system will not be integrated into NATO systems and will be deployed independently, Defense Minister Hulusi Akar said Thursday on the issue.

Speaking to Bloomberg HT, Akar stated that S-400s will be used as an independent system just like S-300s that some NATO members use.

He added that all defense systems include their own test and system control. He stressed that the purchase of the S-400s was a necessity for Turkey, and it will not distance Turkey from NATO.

Previous talks between Turkey and the U.S. on the purchase of Patriots collapsed over a host of issues, from the S-400s to Ankara’s dissatisfaction with Washington’s terms.

Turkey has said it will only agree to an offer if it includes a technology transfer and joint production terms.

Ankara has repeatedly stressed it was the U.S.' refusal to sell it Patriots that led it to seek other sellers, adding that Russia had offered a better deal, including technology transfers.

Turkey even proposed setting up a commission to clarify any technical issues.

During a visit to Washington last November, Erdoğan met with U.S. President Donald Trump and agreed with him on setting up a working group.

NATO Secretary-General Jens Stoltenberg reiterated Wednesday his commitment to finding alternatives to the Russian-made S-400, saying: "Of course, it is a national decision what kind of defense capabilities different allies acquire. But at the same time, what matters for NATO is interoperability and the importance of integrating air and missile defense, and that cannot be the case with a Russian system S-400.