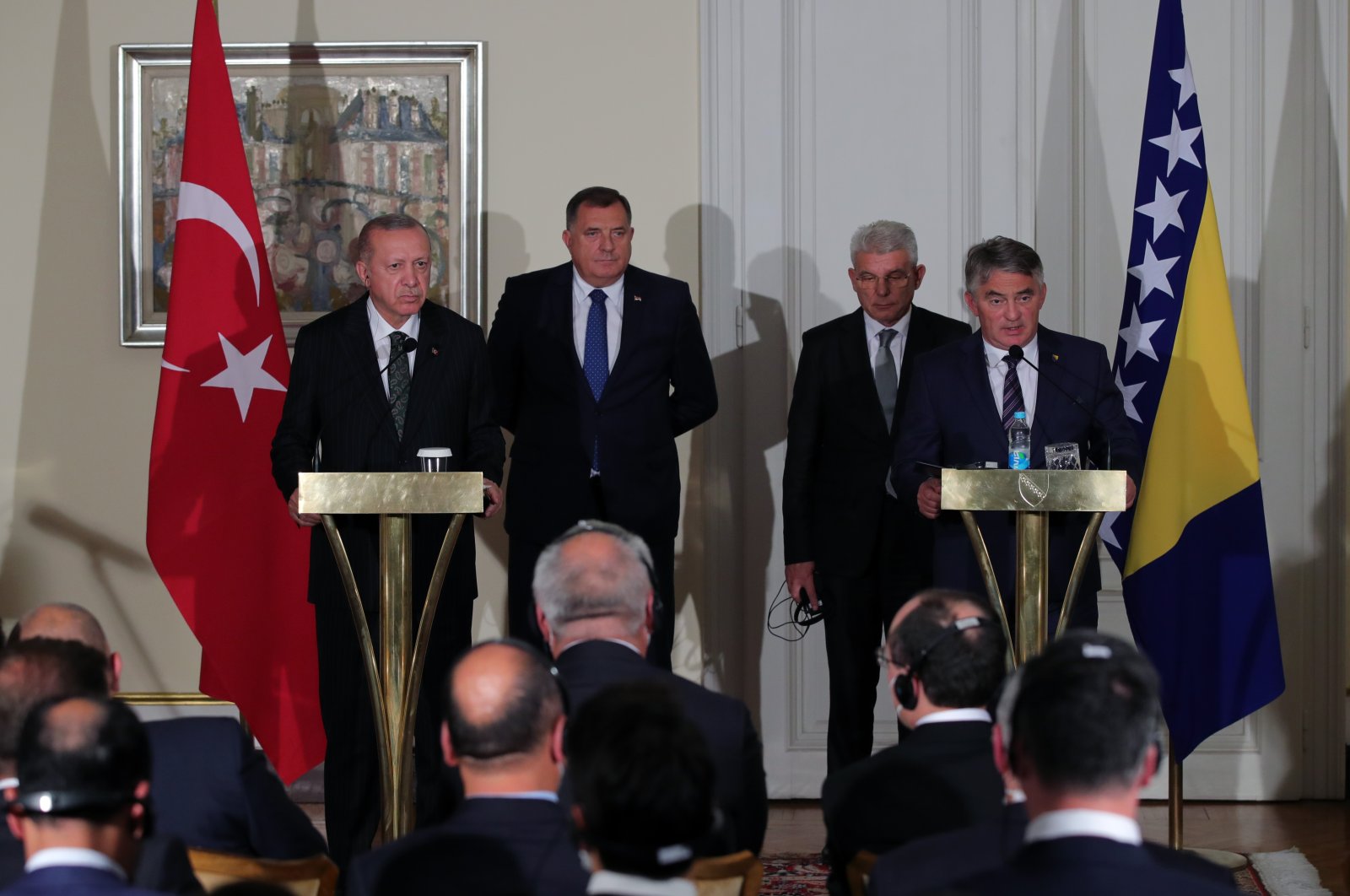 President Recep Tayyip Erdoğan speaks at a news conference held with the members of the Presidential Council at the Presidential Palace of Bosnia-Herzegovina, Aug. 27, 2021. (AA Photo)
by Daily Sabah with DHA Aug 27, 2021 10:05 pm
RECOMMENDED

Daesh and the Taliban are two different groups and it is out of the question to consider exploiting issues between terrorist groups for a country's own interests, President Recep Tayyip Erdoğan said Friday.

The president commented on the situation in Afghanistan while speaking at a news conference held with the members of the Presidential Council at the Presidential Palace of Bosnia-Herzegovina.

"I cannot currently estimate how Daesh is different from Taliban and what type of conflict they will get into, but it is out of the question for Turkey or other countries to exploit this conflict in their own interests," Erdoğan said.

He continued by saying that any steps that will be taken by the U.S. in Afghanistan should be done so to ensure the peace of the Afghan people.

Meanwhile, Erdoğan also said Turkey has completed the withdrawal of all its civilian teams from Afghanistan, except for a limited number of technical staff.

About the twin bombings near the Kabul Hamid Karzai International Airport, in which the death toll has risen to 170 as of late Friday, Erdoğan wondered rhetorically whether “those who are leaving the country have fought against the Daesh terrorist organization.”

Daesh claimed responsibility for the attack outside Kabul airport, the group's Amaq News Agency said on its Telegram channel. As Turkey, Erdoğan said, “we demonstrated the strongest fight against Daesh.”

The Pentagon earlier confirmed two separate blasts occurred near the Kabul airport, with one explosion taking place at Abbey Gate and another targeting the nearby Baron Hotel.

Later, two U.S. officials said that at least 12 U.S. service members were killed in the Afghanistan bombings, including 11 Marines and one Navy medic. Officials said a number of U.S. military troops were wounded. They warn, however, that the numbers may grow.